The following was first published on the GeneralAviationNews.com website on February 21, 2010: 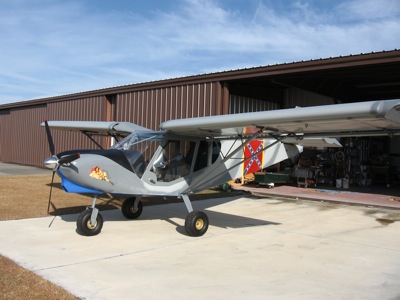 Clem Kramer was a man with a mission: He wanted to fly his homebuilt Zenith STOL CH 750 exactly one year after he began building it on Jan. 9, 2009.

He received the airworthiness certificate for his homebuilt on Jan. 9 of this year, but the cold and blustery weather wasn’t conducive to a first flight. That happened at about 5 p.m. Jan. 13.

“Everything worked flawlessly,” Kramer reported about the 18-minute flight. “It was a thrill of a lifetime.”

It was a thrill that Kramer never expected to have. That’s because he’s known by his flying buddies for his famous quote, “I fly them, I don’t build them.”

He said that after helping his friend, Roger Caldwell, build an RV-7. “I went over there every Wednesday for two hours a night for three years,” he recalled. “I’m in the tail cone bucking rivets, going deaf and upside down. I thought, ‘no way am I going to do this.’”

Then he helped Caldwell build an RV-12 and the process was much easier. “After I helped him with that, I thought, ‘I could do this,’” he said.

The RV-12 kit is similar to the 750, with a lot of the work “basically done,” he said, noting the 750 kit includes factory riveted wing spars, pre-formed sheet-metal parts, and factory-welded parts, while skins and most parts are supplied CNC pre-cut and pilot-hole match-drilled.

He began work on the rudder Jan. 9, 2009. Over the year, he put in 525 hours, plus another 60 or so doing research on the computer, tracking his project at ExperCraft.com, a website that allows homebuilders to store and share their project log information online. 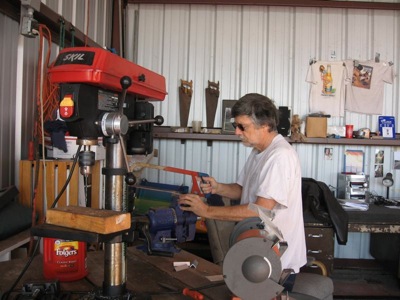 “Working a full-time job with an hour commute each way left most of the construction done on weekends,” he said. “I’ve averaged 20 hours per week on the project with time off for vacations and lack of funds.”

The 750 was built in a T-hangar on a grass strip at Indian Hammock Hunt and Riding Club in Okeechobee, Florida, where Kramer, a logistics supervisor for St. Lucie County Fire District, lives with his wife Nanette.

Like every other builder, finances were critical. “I’m close to retirement, so I wanted to have a plane that I could take care of myself to keep costs down,” he said.

Kramer, 61, spent about $46,000 on the project. He sold his Murphy Renegade to pay for his engine, which meant he didn’t have a plane for much of last year.

“I missed flying,” the 850-hour pilot said. “I had a routine for the last 10 years where I would fly to breakfast every weekend and meet other pilot friends who live in nearby airparks. We meet for breakfast and sit around telling lies, then head home. Since I started building I got out of that habit, and I missed that routine. If I had a plane to fly while I was building, that would be better.”

He was able to return to the weekly breakfasts Feb. 6 for the first time in months, just a few weeks after his first flight. 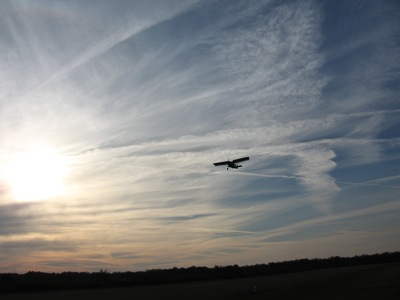 While the first flight was “awesome,” Kramer admitted, “of course I was nervous.”

“I wondered, did I remember that rivet or that bolt,” he said. “I was very intent on the gauges and the noises. When I landed, everybody was asking all these questions about the performance and, while I was watching the gauges the whole time, I couldn’t remember anything.”

He did remember that “it handled beautifully,” although there was a “little bit of a left wing drop, so I had to make an adjustment.

“I know I did a good job,” he continued, “because I was able to take off and I landed and I can take off again.” 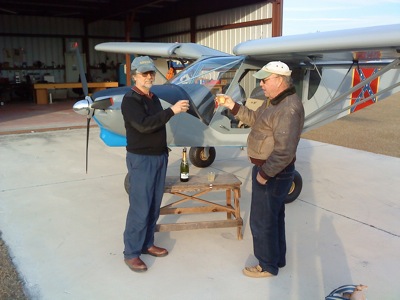 Clem Kramer celebrates the first flight of his homebuilt with his friend Dave Miner.

He likens the first flight to a trip he took about 20 years ago to the Bahamas in a sailboat using only a compass and a chart for navigation. “I came out right where I intended to,” he said proudly, noting he thought it was “awesome” that the old ways worked so well.

His wife, Nanette, wasn’t there for first flight. She’s not a pilot and is uncomfortable with takeoffs and landings, so doesn’t fly a lot, he said. “But she told a friend, ‘I know he’s real fussy, so I’m not worried about it.’”

His wife’s support — plus the support of his many pilot friends — helped keep Kramer on track to finish the project in a year.

Caldwell offered to return the favor and help him build the 750, but he told him that he wanted to do it himself. Kramer noted that Caldwell’s technical support was invaluable, as was help from Dave Miner, who had been a partner in a couple of planes with him. He’s a retired quality control inspector for IBM.

“My friends helped keep me going when I was losing my way and getting discouraged,” he said. “When you share your problems, they don’t seem so big.”

It also helped that another friend, Frank Thompson, started building a 750 about two months after him. “We would compare notes,” he said.

The company also was very helpful, responding to questions in a timely manner, he noted.

One problem he had was that the kit was so new, many of the manuals weren’t complete. Several times he had to backtrack once the plans and manuals were released. That’s why he advises other builders not to buy “the first kit out.”

“If I bought the same kit now, some of the frustrations I had I wouldn’t have had,” he said, relating the story of how when he was mounting the firewall, the plans gave an angle that was hard to get right. “Then they came out with an exact measurement where to cut the stringer and it was a no brainer — you couldn’t go wrong,” he said.

“Actually, it’s so simple that you almost didn’t need the plans, especially if you had been around planes or built models as a kid,” he added.

Other advice: “Don’t look at the whole project. Take it one section at a time,” he said. “Financially, I had to do that, but also, it was good to get one kit at a time. There would be a pile of parts and you could see it go down. That meant you were reaching a milestone and you knew that it was time to move on to the next step.”

He also suggested that if you can have the kits shipped to a commercial address — like your workplace — you will save 50% on the shipping cost.

Kramer made a few modifications to the kit, including running the fuel lines outside the frame, which will make it easier if they ever need to be changed out. He also put a vent in front of the cowling. “The O-200 has cooling problems, but once I put in the opening, the temperatures were down to normal,” he said. Now that he’s done, Kramer admits there’s a small part of him that wishes he still had a project. “I miss the camaraderie of building,” he said. “And now that I’m done, I’m bored. I need another project, but my wife hasn’t figured that out yet.”

Kramer had another reason for getting the plane done: He was diagnosed with prostate cancer in early November and was told the radiation treatments would slow him down. “While they were deciding how to treat it, I worked harder and longer,” he said.

His treatments started Jan. 18. “I have five more to go,” he reported in mid-February. “I’m still flying every chance I get — I have 14 hours on the plane. The outlook is good for the plane — and me. I’m a survivor.”

Comment by Robert Guitton Ropp on April 2, 2010 at 8:45am
Very good job. As I am now Handicaped ( on only right hand ) am looking to find some one to help building one CH 750 but with a Rotax 912 or 914 if possible ?
I could travel very easely from europe and stay around to help as much as I can !
Best regards
Robert
aerocontact@wanadoo.fr

Comment by Chumphol Sirinavin on February 27, 2010 at 7:56am
Your good-looking 750 has the nicest painting scheme. Zenith Aircraft should seek your advice on painting their demo planes.

Comment by Ranbir Singh on February 25, 2010 at 12:44pm
Dear Kramer its a wonderfull project u hv done,congratulations on the first test flihgt,I am very much impressed from color too.

Comment by Adel Alyahya on February 25, 2010 at 12:04pm
Congratulations . . good to see finished projects succeeded and flying in the air
This give me I good hop to have my plane in the air sooner.
Good looking plane
Adel

Comment by Homer E. Gardner, III on February 24, 2010 at 9:16pm
Great looking plane Clem,I'llsee you at breakfast one of these days..

Comment by Jake Reyna on February 23, 2010 at 1:09pm
Nice work Clem! It's great to see that airplanes can be built the old fashioned way, with minimal help.