Last Saturday morning about 11am my trusty Zodiac XL carried me away from my home base at Santa Rosa California (STS) looking for adventure. After stopping in Cloverdale (O60) for a load for fuel it took me out to the coast hoping for cooler air. She headed north along the Pacific Ocean past Shelter Cove to southern Oregon. We spent a few hours investigating the many picturesque valleys in the Medford area. After 650 miles and 7.5 hours in the air she was asking for a quart of oil and another load of fuel. The airport at Ashland (S03) provided. With daylight waning, it was time to head south past the Trinity Alps and Lake Shasta for the day’s final destination Doug and Lori’s house at Rancho Tehama (49CN) for a cold beer and a dip in the pool. At the end of Saturday the plane had logged 815 miles in about 9 hours.

Sunday morning Doug in his Quality Sport Planes 701, Bill Massey in his 601HD and I in my 601XL flew to the Fall River Mill’s flyin which was well attended. Later in the morning, Brad DeMeo arrived from Santa Rosa in his 601XL.

At 1pm it was time to fly home. With our radios turned to 122.75 we stayed in touch for about 40 minutes as we went our separate ways. My 601 took the long way home, flying southeast through the northern Sierra Mountains. When she got to Lake Tahoe she turned for home arriving tired but with the need for adventure well satiated. 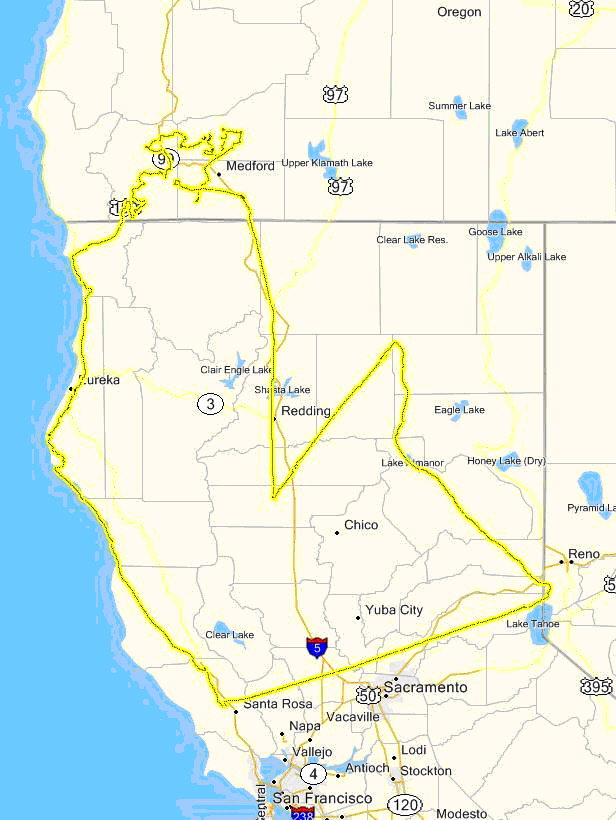 Comment by Mike Ethridge on July 15, 2009 at 12:44pm
Thanks for sharing and allowing us to vicariously enjoy the trip with you. Thanks, Mike

Comment by Stephen R. Smith on July 2, 2009 at 11:00pm
I would say Jack is a creative fellow and yes, come to think of it, I can spell words with my routes and the plane can fly them by itself thanks to the autopilot. That would be a bizarre form of sky writing. Tell Jack I will have the plane spell anything he will volunteer to pay the fuel bill for; the longer the word, the better! Supercalifragilisticexpialidocious might get me to OSH!