Based on the success of the STOL CH 801-HD as a commercial spray plane (a.k.a. the CH-8000), Zenair has quietly been working on an even larger and more capable STOL aircraft than the currently available HD model. Among other modifications, this new CH 801-EX has 4 feet of…

Engines and FWF for your Zenith!

Reminder to all Zenith Builders: Zenair offers a wide range of Firewall Forward Packages (FWF) for a variety of different engines for the CH series of kitplanes. These include full packages, individual components as well as engine-related options. For full details, visit: http://zenair.weebly.com/firewall-forward-packages.html.

Last Saturday was Zenair's 40th Anniversary Fly-in and Open House, with special guest Chris Heintz, Zenair founder and designer of the CH series of kit aircraft. View photos and details on the event! 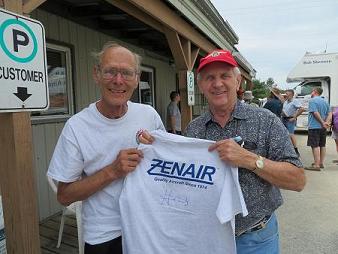 Zenair at Aero-Friedrichshafen in Germany

The show last month was a great success as we celebrated a new beginning for Zenair in Europe. On display was the first new and much-anticipated factory-assembled and Italian-built light-weight CH 650Ei (European ultralight category)!

Designer Chris Heintz was present as well as production personnel from ICP - and regional distributors from nine different European countries!… 
Every year in France, just a few weeks after the massive (and grueling) bicycle-world event, another tour takes place which is much more gentle, low-key, and more fun for us ultralight pilots: le Tour ULM. Organized by the national ultralight association (FFPLUM), this year’s tour included 150 ultralights of every shape, size and make.…