After what seems like too way long a time I am finally starting to rivet the spars. 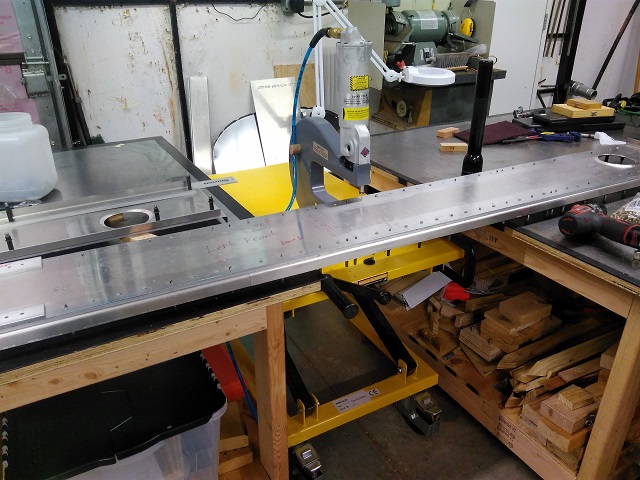 Some tools I have found useful

Below is a list of some tools I have found useful while scratchbuilding. Some of these I already had because I have machine tools, but have been very useful for building my plane.

1. Magnets- Neodymium magnets work great for holding parts together for doing test fit ups. Wrap magnets in duct tape with extra hanging off as a tab to grab onto them.

2. Steel sheet- Laying steel sheet on my workbench and magnets to hold aluminum and layout tools in place. I use  20…

I am interested in changing from the wingtips provided in the CH 750 Cruzer kit to winglets.

Perhaps you might be able to steer me to further information.

The Cruzer kit is the absolute best in the business, and your efforts toward improving it are clearly visible.

Today, November 21, is Chris' 78th birthday. While most of you know Chris or are familiar with him and his work, I know many new Zenith builders and owners are not as familiar (since his retirement about six years ago) so below I am sharing an article written by aviation writer and friend Jim Cavanaugh in 2011 for the "Zeniths to Oshkosh" celebrations honoring Chris Heintz at EAA AirVenture.…

Hi, Just bought a 701 in Texas with approx 120 hrs. I would like to connect with another 701 owner in southern  Arizona. The plane will move out of my garage to Norgales International airport within the next month or so.. Is anyone out there? Thanks, Allan West 520 400 4161

A bit more time was spent in the workshop this weekend, and I have drilled and cleco'd parts to show for it!
http://justplanechris.com/rudder-skeleton-assembly/

Viking at the Deland FL showcase

My focus for the last few months has been to complete spar construction.Most of the holes were drilled and match drilled into the doublers using my mill to insure that the holes were perpendicular. However some holes near the root were left  deliberately left undone because of uncertainty in the plans. .Once the spar was clecoed together I had a better understanding of the hole locations and needed to drill those out.

Hey Guys....Looking for HELP. I have the same problem with my recently completed CH750 STOL as far as unequal fuel flow from the right and left tanks. SCARY!!! I flew about 40 minutes yesterday, starting with even tank levels of about 8.5 gallons in each, and landed with 4 gallons in the left and 8 gallons in the right. I have the vented caps that were supplied with my kit. Also noticed 100LL blue stain on my new vinyl covered right wing. A bummer. I plumbed both tanks straight across in the… Continue