Got the rudder kit from Allan at Zenair australia 2 weeks ago. Just finished drilling the skins. The instruction manual is spot on.

I've just ordered the plans set, so will be into major build mode soon.

I am in the process of odering a plug n play instrument panel.  I cannot decide whether to put engine controls in a quadrant attached to fuselage or the more standard push-pull controls in the panel.  I don't even know right now how many controls are needed.  Throttle for sure but I would assume no mixture since it has an altitude compensated carb.  How about choke?  Is carb heat needed on the Jabiru 3300A?  Any suggestions or lessons learned sure will be appreciated. I hope to have two of each… Continue

Zenair Newsletter & DVD #185 now shipping! Coverage of Airventure and Year of the Zeniths 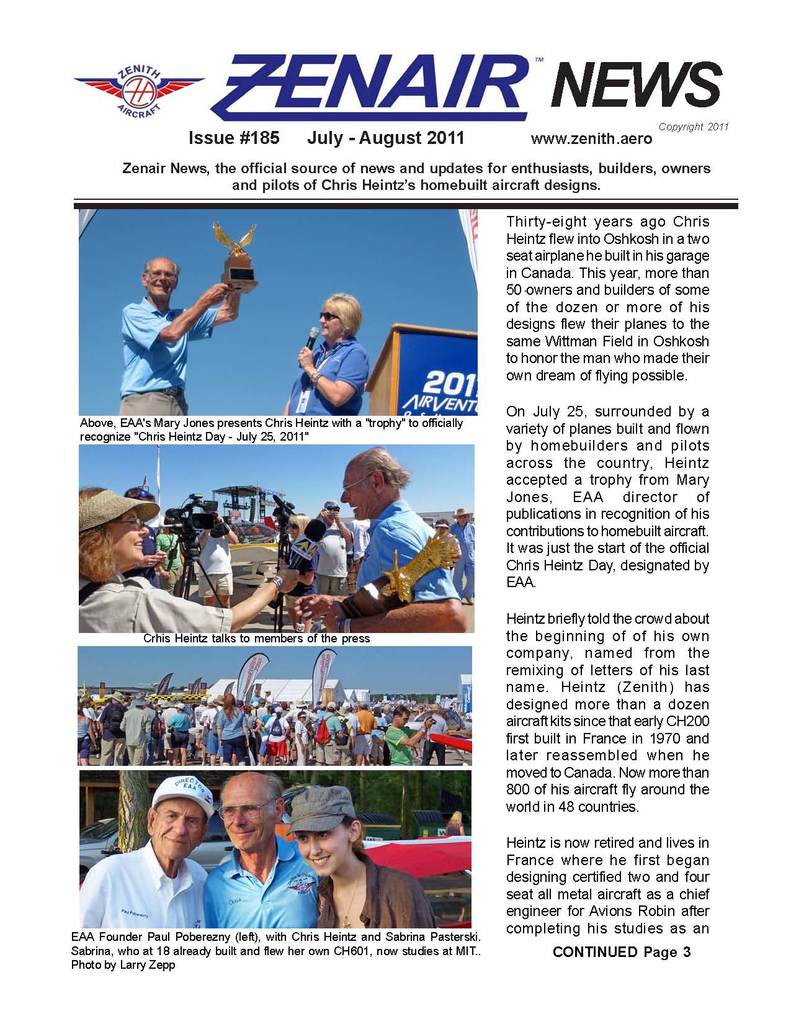 Well, as much as anything is finished before final assembly.

I drilled the 5/64" holes in the outer hinge pins, assembled the centre hinge point (bloody hard to cut a 2.5mm length of 1/4" tube for the bushing!) - got it all together and swinging freely.

Only thing really left to do is source some sheetmetal screws and put an inspection hatch over the hole in the bottom skin where the trim servo is.

Anyone interested in Zenith Builders live chat, here's the address:

I am happy to report that VH-KMI flew for the first time yesterday. The flight was conducted from Goolwa South Australia and lasted 40 minutes. There are some minor issues that are to be expected but I was generally pleased with the handling of the aircraft.

Still hasn't sunk in yet.

New hope for young people in Africa from Zenith

Thank you Zenith for making the growth of light aviation possible in Ghana, West Africa and for giving so many young people new hope. The ability to produce parts from scratch build, and to have kit parts coupled with excellent manuals and plans and outstanding support from the factory and Zenith community is what has made it possible for WAASPS, Medicine on the Move and the AvTech Academy to succeed in changing lives, one flight at a time.

The changes to these girls lives…

I am considering buying a "broken" Z 601 XL-B (prop and engine damaged in hangar accident by elder owner), and since I am not a "builder", I'm wondering how to remove the wings for trailer transport of the plane from Ohio to Virginia.  This may be "mission impossible" or "foolish mission" (new show?), but I'd like ideas and advice about HOW and IF this can be done safely.  Obviously I want to avoid or minimize any damage to the wings, electrical and fuel lines, control cables, etc.  I don't… Continue

I very interested in buying a built 2006 Z 601 XL which is registered E-AB and have many questions.  Does the E-AB registration transfer to the new owner upon sale?  The real questions is; does the new owner have the same inspection and maintenance privileges as the original owner?  There is no POH for the aircraft of interest; can I get one from Zenith Airraft?  This aircraft has a Corvair O-164 engine built by the aircraft builder per Wm Wynne's conversion manual.  Can I get a maintenance… Continue

I decided not to write about Oshkosh - since there was a lot already.. .but the Medicine on the Move (MoM) team are just winding up their USA tour - and looking forward to getting home to the team that are still in Ghana working hard on keeping the airfield ready for our return (they chose to dig out some large stones whilst we are away... and now need to fill the holes!!)

Last week we had the wonderful opportunity to visit the Zenith Factory.  For Patricia this was her…

Another Satisfied Group at American LSA

Today we hosted another luncheon for a group of Zenith Rudder Workshop participants.

They keep growing in size. I'm not sure if it's because Zenith is selling more kits or we are doing such a great job with lunch that people are coming just for that.

In either case we certainly enjoy having everyone join us.

If you are ever in the area please take the time to stop by and visit our Builder Assist & Assembly Center here in Mexico, Mo. not far from the Zenith…

To Joe in Florida

This is Rick Lach from Raven Aviation. You called early this morning (Thursday 8-10-11) and a second time later in the morning and left a message about Wing Strut Fairings for 701's. Well the machine didn't get all of your phone number, so I can't call you back. So would you please try again at the following numbers:

Last night I trimmed skins to size, deburred, cut out slot in trim tab spar for control rod and filed all the edges.

I'd seen other people use a Dremel tool to do the control slot - I don't have one (used to, think I lent it to someone!!) - but found that a step drill, used carefully and with wood clamped behind the aluminium, worked fine.  Even on the 0.016 skin.

I also made a doubler (just 0.016) for where the trim servo is riveted to the top skin.

We were busy throughout the AirVenture week at the Zenith booth, meeting with both existing builders and owners, and showing the demo aircraft to potential new builders. We flew in our two new factory demonstrators: The STOL CH 750 and the low-wing CH…

Over the last few days I've continued working on the elevators.  Drilled all holes and removed skins from skeleton.

After some measuring and muttering, I carefully cut out the trailing edge of the port rear skin where the trim tab goes.  Reattached the skin and mounted the tab and hinge, drilling through the skin, hinge and tab spar.  Turned the elevator over and drilled the bottom skin to tab spar as well.

Trim tab looks good in the slot and moves freely.  The side gaps…

Wednesday will be a day to remember for many years.  It was the day for the Zenith Builders Banquet to honor Chris Heintz.  The location for the banquet was the scenic EAA Nature Center right on the AirVenture grounds under a large tent, big enough to hold all 250 attendees:

EAA's founder Paul Poberezny was the special guest for the evening, and he and Chris spent a…

With the opening day slated officially as "Chris Heintz Day" at AirVenture, Chris had many activities scheduled during the first couple of days.  My son Calvin, age 17, was tasked with escorting Chris during the…

Had a good weekend - on Sunday I cut out & bent the rear skins (made them a bit oversize in span so I can cut the ends to fit), drilled and clecoed them to the skeleton on Tuesday evening.

Yesterday I had a couple of free hours, cut out the front skins and got one taped on.

I love front skins.   A simple rectangular piece of metal, give it a bit of a bend, and all of a sudden you've got a complete airfoil shape.  Fantastic!