Live Construction of 750 on UStream

To give my distant grandchildren something to watch (I'm no threat to Big Bird) my shop/hangar is now visible on ustream.com.  Just do a search for Zenith 750 to find my channel.  BTW, I turn the audio off when not specifically broadcasting to my kids......Steve

. . . along with installation help. 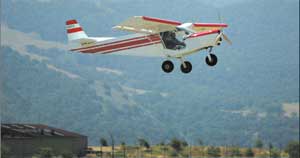 Liquid cooled Heads for Jabiru engines. I just heard about them. Does anyone have any info of this new cooling system?

Liquid cooled Heads for Jabiru engines. I just heard about them. Does anyone have any info of this new cooling system? Continue

As I reported last January, N200BE was struck from the rear by a biplane during rollout after landing.  As you can see the tail of the Zodiac was chewed off by the biplane's prop.  You can read all about the accident on the FAA's accident website (01/29/2011).  What I wish to report is that as of 16 May, the little silver 601XL-B is airworthy again.   Thanks to Hampton Aviation in Mena, Arkanas, the tail of N200BE has been repaired.…

I recently bought a CH-750 in Oklahome and did all my local flying there, resulting in flight durations of two hours or less. Finally it was time for an "extended" cross-country from Cushing OK (CUH) to my home,Rockport TX (RKP). During the flight I found that I had essentially no fuel flow from the right-hand tank. The engine also quit a couple of times. I have reversed fuel tank caps to see if the problem reversed. With only half-full tanks it appeared the problem just went away. However,…

Dealer From Brazil and friends 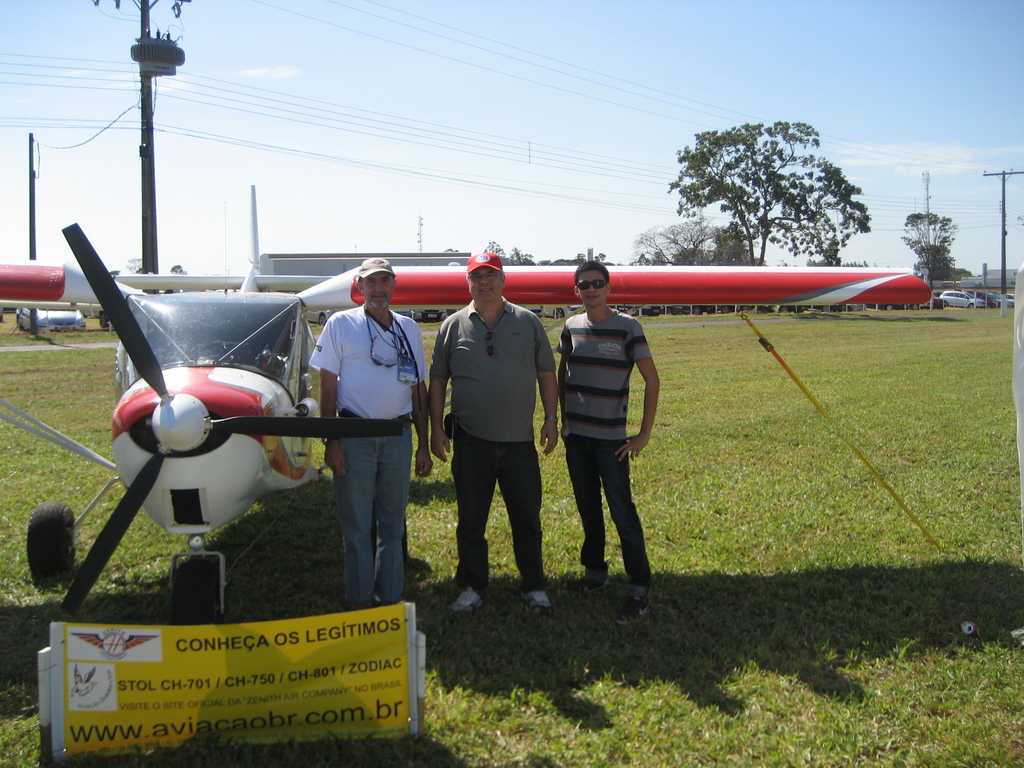 In this picture, from left to right, is Jean (Zenith dealer from Brasil), Amadeu, friend and builder (CH 750), and I, waiting to receive my tail kit.

Behind us, Jean's Stol CH…

Currently on holiday in Bendigo (Vic, Australia) so dropped in to Bendigo Airport where Allan Barton has his beautiful 750 and 601.  Allan very kindly took me up for a flight in his 750, which has inspired me to redouble my efforts on my scratch-built 701.

The plane flew beautifully, especially impressed with the digital instrumentation and "professional" extras such as carby heat, boost etc.

The aircraft is surprisingly roomy with the bubble doors, which I'll be getting too. …

Finished my streamlined strut covers yesterday.  Didn't really see much top end performance increase, maybe 1 MPH.  Slow speed handling is much happier though.  Stall speed is down and the plane happily climbs at 30 MPH now where before it got a little mushy at about 40 before.

When you order Zenith amphibian floats you have to chose between operating your retractable wheels either by a hand pump or electric pump. Zenith does not price either pump differently...but if you want a hand pump to back up the electric version its an additional $1000. The hand pump must be mounted between the pilots legs so it can be operated by the pilot. The electric pump can be mounted in the rear and operated with a single switch. Both pumps weigh the same. Do any of the builders have… Continue

I recently attended Quality Sport Plane's Open House and West Coast Zenith Builder Gathering on May 7.  Before the open house I visited Christopher Desmond and flew his new STOL CH 701 in the back country. I'll post photos and videos of…

Playing with the wind: The big circle

It is said that when making a round trip any wind is a disadvantage.  While you may have a tail wind in one direction, you will have a headwind in the other.  You will spend more time in the headwind then in the tailwind so overall, the wind will increase your trip time and increase your fuel burn.  I have found sometimes this is true, other times it is not.


Today’s pilot has powerful weather tools to help fly safely and sometimes more efficiently.  Now if your only going up…

What's wrong with this picture.

If you look at the first picture of the side skin layout you will see what I missed. On one of the skins the rivet line for the front HT bracket is off by 16mm Not sure how it happened, of course I didn't discover this until after I drilled the line. 6 hrs work down the tubes! Ah the joys of scratch building. At least I can use the material for smaller pieces. Got the right side skin clamped up, and will remake a 2nd skin next weekend. Press on from there to the next screw…

Island hopping in the Caribbean

Flying the Zodiac in Guadeloupe

Following are a few more great video clips flying in Guadeloupe.  This time, the videos are from a Zodiac CH 601, landing at the unique island airports.  The first one is landing the CH601 on the Terre-de-Haut Island, which is the largest island that makes up the "…

The photo assembly guides depict the door window plastic being installed sitting on the work table.  Absolutely put the door frame back into the jig before pilot drilling the window to the frame!  Finding this out the hard way:  door was twisted and would no longer fit in the cabin opening.  I was able to reposition the assembly in the jig and re-drill the pilot holes in the bottom edge and forward and aft door frame tubes and salvage the Lexan plastic.  The upper hinge and the door side…

Hello all    Roger Dubbert has landed in sfo and is traveling to QSP to be a part of our open hanger day team he will be doing demo flights in our CH 750 so if you have not yet had the chance to meet Roger make your way to Cloverdale CA tommorrow May 7th he would love to see as many Zenith builders and flyers as possible. See our web sight www.qualitysportplanes  for the info you might need.

The Franklin's had a forced landing in Brownsville Texas on 10 March during a a Air show.

A fire resulted in both of them having 3rd degree burns. Amanda's were over 70% of her body.

She is still at the  Brooke Army Burn Center in San Antonio Texas,  A fly-in and family day fund raiser will be held at the Neosho Robinson Airport KEOS on 14 May 2011. There will be a Pancake breakfast, Silent Auction, Band and many more activities. All proceeds will go directkt to the Franklin's…

I think most builders have at least one slow leak tire on their aircraft. On mine its the nose gear tire, it leaks down over a couple weeks while the mains have never leaked. I was thinking about putting tubes in the tires, but that adds extra cost and weight (I assume that is why tubes are not included in the kit?). A fellow builder Bob Stuart (CH701 plans only) suggested removing the valve stem and injecting (syringe) 5 - 10 cc of anti-freeze then installing the stem and inflating the…

Ok, so here is your challenge - a floating airport.

We are seriously considering taking on a disused hospital ship and converting it into a 'Health Education Vessel with Advanced First Responder Capabilities'.  If successful, which is more than 50%, we would want to keep the vessel at large the majority of the time, anchored at a number of points along the thousands of kilometers of lake-coast on the largest man made lake in the world.  Moving crews and supplies on and off…

Recently my wife (Mary) and I journeyed to Australia in celebration of her 50th birthday.  Being long-time EAA members and homebuilders, part of our vacation planning included establishing contact with Australian homebuilders who lived in the regions we were going to visit.

We've always enjoyed meeting fellow aviation enthusiasts.  Some of our most enjoyable times have been in the company of aviators who we've met at various places.  From small fly-ins at places like Brodhead…