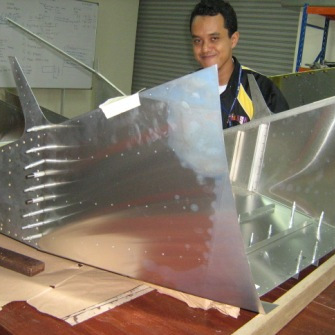 Salam and hi guys,I am a builder of CH750 in Malaysia. We are now in progress building the fuselage and cant wait to get the aircraft stand on its gear.In the mean time, i am preparing a list of…Continue

Project Status
Less than half

Building and Flying Info / Your Profession / Other Background Info
aerospace engineer grads 2007. Currently working on assembling CH750 kit and a certified kit builder for CH750 from Department of Civil Aviation (MALAYSIA) for airframe.

Hi Zihad, I did drill out the cover to tighten the bolt.  1" dia. and used a metal hole plug found at the local hardware store. Used in electrical boxes. You can remove it if you need access later. Hope this helps, Jim

Mainly by reputation, though I'm sure I we must have meet a few times at TUDM Simpang during the Rakun Muda aeronautical program.

He pretty much started Expermental aviation in Malaysia, and got the approvals to allow it to start.

>  Yes, this ch750 building is sponsored by our university through research grant.

What is the USM trying to achieve here?  Will it be a one off, or is it hoped to continue the program?

What do you plan to do with it when you finish it?  Have you talked to Percy (If I recall his name correctly) down at Penang Aero Club?
Will you do your test program at Bayen Lepas?  You might find the airfield at Taiping, Perak to be suitably quite, instead of operating from Penang International.

>  about the crashed of 9M-EEL, i havent heard about it crashing to a pole. capt siva only told me that the a/c is blown away by a gust from a sikorsky that resulting and upside down of the a/c. but the pilot is fine and still the a/c is still flying now.

I hadn't heard about that crash.  The one that I know about was on 15 july 2006.  You can see some pictures here http://s47.photobucket.com/albums/f198/asmara_kawaii/9M%20-%20EEL/ , with EEL looking very sad indeed, yet dignified.  On board were Lee Chong Yen (Builder) and Atan Akmar Masbah.  The way I recall it, there was an engine failure in the circuit, and as they tried a glide approach they struck a light pole on Federal Highway One, Sungei Besi.  However, my memory may be in error, when I look it up, everyone talks about a gust of wind blowing it into the light pole.  Having said that, the gust of wind explanation doesn't make a lot of sense to me.  You should not be in a position where a gust of wind can blow you into a light pole!

>  how about you paul? did you buy the kit by yourself?

Mixture of plans built and kit parts, a lot of the harder stuff, like welded assemblies (except the engine mount), main undercarriage and the solid riveted stuff was from Zenair.

I'm making a few changes, and I've had to replace some calander lifed components.  Due to CG issues, my engine is very close to the firewall, so I can't change my nose bungee without pulling the engine, and as it is ten years old, I do want to replace it before first flight.  And seeing as the I had easy access to the nose gear, I've been re-engineering it to have a lower bearing similar to the one you have in the 750, though made of Teflon instead of nylon 6,6.  Not that I have anything against using Nylon, it was just easier for me to get some Teflon.

As you may or may not know, the lower bearing in the 750 nose gear acts to centralise the rudder in flight, whilst the steering connections for the rudder pedals to the nose gear act to tension the rudder cables.  Many people complain of excessive stiffness in the 701 version, which uses two shaped pieces of aluminium in that role.  Your 750 uses a single large piece of nylon to do the same job, whilst mine will use a large lump of Teflon, which should be slipperier - at the expense of being somewhat heavier than Nylon.

Oops! Apologies for the typo on your name, Zihad.

Nice to see your progress.  Did KPT Siva tell you about the crash history of 9M-EEL?

There is no better testimony to the ruggedness of the design than the lack of injuries received after it hit a light pole and lost a wing near TUDM Simpang after an engine failure.  And to be able to be repaired to the marvellous rebuild that you have flown in.

Is your aircraft USM sponsored?

use for anti corrosion ( Cortec) that supplied with the kit and Where I live in the desert (Riyadh) I think it is more than enough .

For painting I have chosen auto primer it is called Sikken which come in gray or paige color. at first we cleaned the surface with lacquer thinner and sanded it with sand paper no. 400 then sprayed the primer for future applications. I think there are many other ways to paint , and if you ask people who are more expert than me they will help you better .

BTW, what is the engine you are going to use for the kit , ?

Hello Zihad, just seen your message. What can I try help you with?

Hi Zihad, If you need help finishing the aircraft or training, I can come help you. I live in the USA but love going all over the world helping builders. I have built three Zenith CH-701s and I am an FAA Gold Seal and Master Flight Instructor. I also hold an Airline Transport License both here in the USA and in The Philippines.