Zenith Donut Install - Great in the air, stiff on the ground

Had my first flight today after the donut install on my 601 XL.

Taxiing was, uncomfortable to say the least. It felt like it was very stiff and sticky. I tried to do a take off and freaked about 1/4 way down the runway an aborted. I understand this is a new system and I may not be used to it which may be a part of the problem.

After I aborted the takeoff I, I did 4 more high speed taxi tests and could not really get used to the steering. Finally I just figured it might just take time to get used to, and took off.

In the air - the only thing I can say was, it was a new plane! I had gotten used to leading the turns with the rudder because with the bungee, you had to. No more.

The rudder pressure and the aileron pressures are now very close to equal. It flies like a dream with very light rudder pressure. It's so light it took a few minutes to get past the "heavy foot syndrome" that I was used to. Also, the nose gear stayed centered in flight - no need to kick it straight after every turn.

The donut system really changes the whole flying experience of the plane and I love it.

However, back to my ground handling issue. After I set the pre-load on the donuts the bottom spacer was about 1/2" above the stop. This seemed about right from what others were saying. I have a heavy O-235 engine and I'm not clear if this would require more pre-load, or less?

After the flight I looked at the bottom spacer position and it was at least 1-1/4" up from the lower stop (a lot more than after the initial install for some reason). Now I'm wondering if I put too much pre-load on the system?

Presumably too much pre-load would compress the donuts against the strut and could make ground handling stiffer, right???

As another data point I did lithium grease the strut and donuts very well, so this issue is not a lack of grease

I would really like to hear from others who have done this because I'm not sure of the next step. Zenith provides no guidance on the pre-load so I'm not sure how to proceed.

It flies so great I would really like to improve the ground handling.

After you set the pre-load, how high did the strut steering arms ride above the lower bearing block with the nose wheel resting on the ground? Mine looked like this: 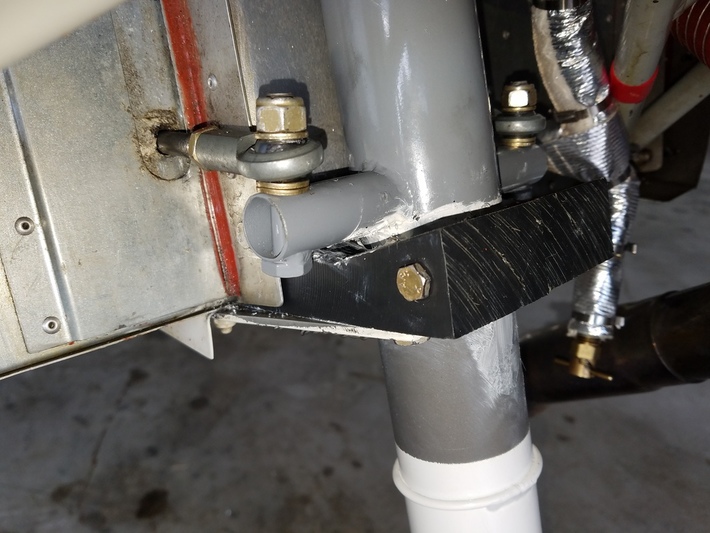 There is absolutely no stiffness with taxiing -  the pedal effort while taxiing was just as improved over the bungee as it was in-flight - I'd estimate the steering arms ride about 3/8"-1/2" above the bearing block and this did not change after the first flight.

all I can think of is I did not really have the donuts compressed all the way up to the top stop initially. I'm going to take the weight off the nose gear and readjust. Hopefully that will solve the problem.

I also discovered I had painted the strut up to the area where is passes thru the lower block. This area may not have been greased well and I've loosened the two horizontal bolts that clamp the lower block together. I will try some taxi tests tomorrow to see if I've fixed the problem. Better instructions from Zenith would go a long way...

FINALLY! Managed to get the ground handling fixed. Took me the best part of 3 days that could have been avoided if the issue was just made clear in the install instructions (that's my excuse, anyway!).

I first jacked the plane up again and reduced the pre-load on the donut stack thinking the extra tension caused the donuts to expand against the strut. Sort of had some logic to it. Took it out for a taxi run - and it was just as bad as before. The steering was anything but smooth. It was hard to turn and it would catch/stick at certain points. it was so bad I would not have felt safe taking off again. Arghhh!!! (i get frustrated easier than most).

So, back to the hangar, jack it up again and just start looking at it. Trouble-shooting problems is not something I do well.

When the nose gear is off the ground the it turns easily and smoothly. No problem at all. So the problem is only happening when the weight is on the nose gear. My first thought was maybe it was catching where the strut passed thru thru the new upper stop and the original hole in the upper support. After jacking the nose up and down a few times this did not appear to be happening.

So, if its not "catching" at the top and the gear moves smoothly when off the ground, then its got to be the donut stack itself, right? It was at this point that it dawned on me. Yes, I had grease the strut and the inside holes of the donuts really well.

What I had not done was grease in between the donuts and, particularly, on the top of the last donut where it bears against the upper stop. Long story short, that fixed the **** problem. The plane steers smoothly now.

So, if your doing this install, make sure you grease the top and bottom of the donuts, as well as the donut holes.

I just zoomed in on John's picture in his original post on this subject. If you look close you can see he greased between the donuts. Arghghh! I wish I had looked a little closer at the picture 3 days ago!