From time-to-time there have been reports of the VDO fuel senders leaking or even the central electrode falling out!  These senders were OEM for VW's and intended to be top-mounted on the fuel tank.  When side-mounted in the Zenith tanks, they are continuously immersed in fuel under slight pressure from the weight of the fuel. My VDO senders are at least 10 years old, installed for 8 years, and have never given a problem ... till now!

I recently flew to Mexico, MO for the Zenith Homecoming and when I returned, began my annual.  I opened the access covers on the bottom of my STOL 750's wings and the senders were bone-dry without evidence of leaking, nor was there even a hint of a whiff of gas fumes.  Since all was good, I buttoned that area up! However, I had left the tanks about 1/4 full on both sides when I started the annual.  Afterwards, I topped off both tanks.  The next day, I noticed a drop of fuel on the hangar floor near the aft edge of the wing near the root. Looking up, I saw a drop of fuel hanging from the inboard flaperon bracket.  I opened the access panel again and the sender was very wet with fuel!  It also appeared the white insulator was slightly shifted or cocked from its usual position.  I touched the insulator and a piece about the size of pea crumbled off!  Yikes!  It was obvious the insulator was deteriorated and I immediately set about draining the tank with visions of the insulator popping out and dumping a tank of fuel into the wing root! Fortunately, that didn't happen.

Here's a pic of the crumbled insulator: (Ignore the AN3 bolt - I had already removed one machine screw and just used the bolt to serve as a "handle" when I manipulated the sender out of the hole.) 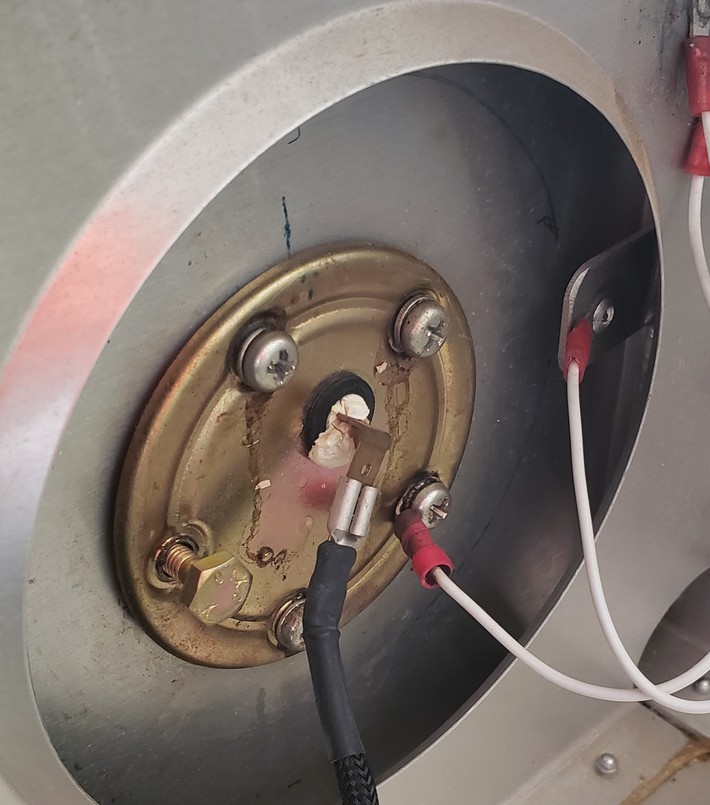 Bad enough, right? No, it gets worse!  After draining the tank, I was walking around the plane and saw a drop of fuel on the floor in a similar location on the right!  I opened the right access panel and the right sender was leaking, too!  The insulator didn't seem as deteriorated as the left - it didn't crumble - but it did feel slightly loose and could be slightly rotated.

Obviously, the fuel top-off triggered the leaks.  What are the odds that I could have just completed an 800 nm round trip with 3 refuelings and the senders wait to leak till I get home - and both senders at that!  I felt the angels were truly with me on that last trip!

So, I have drilled out the rivets enough to fold back the top wing root covers and remove the VDO senders.  I plan to install the Stewart Warner senders the Van's RV builders have used for years.  They appear to be of a much higher quality and use a "thick film" resistor that is superior to the VDO's wire-wound resistor.  It's a big plus that they mount in an absolutely identical manner as the VDO's (they even use the same screws and mounting ring).  One of our members, Mark Pensenstadler, has an excellent YouTube channel, Kitplane Enthusiast, and has a detailed video on these senders here.

After researching this somewhat, I am going to mount them the way Van's recommends - no gasket and use ProSeal instead.  I'll also ProSeal the screws to prevent leaks.  Obviously, one needs to dry fit and test the resistance, etc., before final installation as it would be very difficult to remove a sender later and no way am I going to drill out that wing root skin again! Ha!  Although these senders seem very reliable, If a sender ever failed, but was not leaking, I'd be very tempted to simply leave it and cut an access panel in the top skin over the tank and mount a sender there!

I also plan to use my flexible "snake" video camera to verify the float action during a dry fit test.  You want the float to both touch the top and bottom of the tank to get the maximum measuring range.  I saw a post elsewhere where a builder dry-fit the sender and left a screw out and passed a piece of safety wire through and tied it to the float wire.  He could then verify the float had full range of motion by hearing it tap against the top and bottom skins as he pulled the safety wire. Obviously, I could also verify this by observing through my "snake" video camera.

Just thought I'd put this out to remind everyone to check those VDO senders very carefully!  If yours is leaking, I would recommend to definitely drain the tank below the level of the sender before probing around that white insulator!

Well, John, if it's gonna happen, you were blessed that it happened at home!  I've got the VDO's as well and wondering how long it will be before they leak. Not if, but when. And I'm not even flying yet!

Might ge a good idea to prophylactically apply something like 5500 sealant over the insulator. Just thinking out loud.

any possibility you got some fuel with ethanol in it?

seems too much of a coincidence that they both started leaking at the same time.

I don't believe in coincidences, either, but the only fuel I've recently burned is my own 93 AKI no-ethanol fuel, the mogas at KMYJ/Mexico, MO, and 100LL at Cairo, IL.  I'll retest my 93 AKI tomorrow, but I'm pretty sure I tested it when I bought  the last batch for my tanker trailer.  The crumbling deterioration of the insulator looks like it has been going on for a while! However, one would think that surely a fuel sender would be ethanol resistant!

ok, My local non ethanol station only has I believe 87 octane

Interesting, I have a similar issue that if I completely fill the tanks then the pax side wing will leak fuel down the flapper on bracket. But if I don’t top all the way off then it is fine. I’ll take a look at this alternative sender you mention.

Very interesting, Thanks for the heads up. Something to watch as I've just started test flying my Cruzer. Additionly as a word of caution when removing screws with leaking fuel around, use a hand speedhandle and not a cordless electic tool. So easy to do out of habit. Tom

Thanks for the heads up. Your 750 and mine are the exact same age and within 100 hrs of total flight time so I’m taking a look at mine later today. This is one item I would change by going to a top mounted sender if I were to build another.

Could you post the Stewart Warner part # you are using? I assume they work with the existing OHM range Of our guages.

The Stewart Warner senders are 385B-F (left) and 385C-F (right). I ordered from Van's Aircraft for about $35 each, but later found you could get them through a link on the Stewart Warner website for about $30 each.  They are 33 ohm (full) to 240 ohm (empty) senders.  The exact values aren't important in my case since I can calibrate my MGL EMS to any range of resistance.  If one was using a dedicated, analog fuel gauge, then of course the resistance range of the sender would have to match the gauge.  You can use your old screws if you wish, but many of the Van's builders recommend using socket head cap screws - probably easier to get back out if you sealed them with ProSeal.  You won't need a gasket if you seal the sender's circumference with ProSeal and Van's recommends NOT using a gasket - ProSeal only.

I agree with you - if I had to do it again, I'd definitely top-mount the senders with an access plate immediately above!  In fact, like I said, if one of these new senders ever fails, I'd seriously consider cutting an access hole above the tank and top-mounting the new sender.  I'd hate to have to drill out the top wing root skins like I did this time, but with the ProSeal installation, it would be very difficult to get the old sender out.  If it wasn't leaking, I just leave it!  The beauty of ProSeal, however, is that if there ever is a leak but the sender is OK otherwise, I can just slather some more Proseal over it to seal it.

Good to see you at the Homecoming, Jimmy!