My STOL 750's fuselage windows aft of the doors are Lexan (polycarbonate). Lexan is extremely tough, but ironically, scratches easily and is absolutely intolerant of gasoline!  Quite some time back, I over-filled my fuel tanks on a cool morning.  During the day, it became quite warm and the fuel expanded and slowly seeped out through the original Zenith vented caps that were installed.  Unfortunately, there was an unsealed gap around the filler neck that allowed the seeping fuel to flow down inside the wing, follow the bottom of the wing down the dihedral to the fuselage, and then proceeded to slowly ooze down the windows just aft of the doors. (Lesson learned, I have since modified the caps with snorkel vents and put a rubber seal around the filler neck where it penetrates the upper wing skin to prevent this from happening again.  I also leave a little expansion room when topping off the fuel!)

The slow ooze of fuel down the windows decolorized the dark tint, leaving cloudy white streaks.  It was fairly minimal on the right but very marked (pun intended!) on the left.  No amount of polishing, etc., helped - the tint was simply gone and the Lexan was milky white in appearance.  I tried touching it up with various tints and dyes, but most seemed to just make it look worse!

I improved the appearance slightly by apply an exterior vinyl tint film that was intended for polycarbonate headlight covers.  It improved or muted the appearance somewhat, but, probably due to my application technique (or lack of it!), it shrunk back somewhat around the edges and also had a slightly murky or translucent look to it.

I was never satisfied, however, with the appearance, so I finally removed all the vinyl tint and applied 50/50 black perforated vinyl on the exterior of all the wndows.  (50% of the area is small holes and 50% black vinyl - this is identical to the perforated wraps that cover the windows on cars.)  This did an excellent job of disguising minor scratches or stains.  It definitely provides about the same effect as a dark tint window, but visibility is not too bad - it's like looking out through a screen door.

However, it still didn't completely mask the severe stains on the window immediately behind the pilot's door.  It's impossible for the pilot to see out through that window, anyway, since it's behind your left shoulder and  hidden by the vertical structural upright, so I decided to just black it out entirely.  I covered the window with opaque black vinyl, and then to make "lemonade out of lemons," decided to apply a Zenith logo and list of those who lent major assistance during the build.  I've already had remarks from the casual onlooker that they certainly notice the logo and the list, but didn't even notice or think about the window itself being totally blacked-out.  BTW, the logo and list stickers were purchased from one of our members, Mark Pensenstadler, who has most any aviation-related sticker you could want or can custom-make stickers - you can find them at AircraftStickers.com.

If you click on the first image and enlarge it, you can better see the perforated effect in the rear window.  However, from a distance, the blacked-out window and the perforated tint window look about the same: 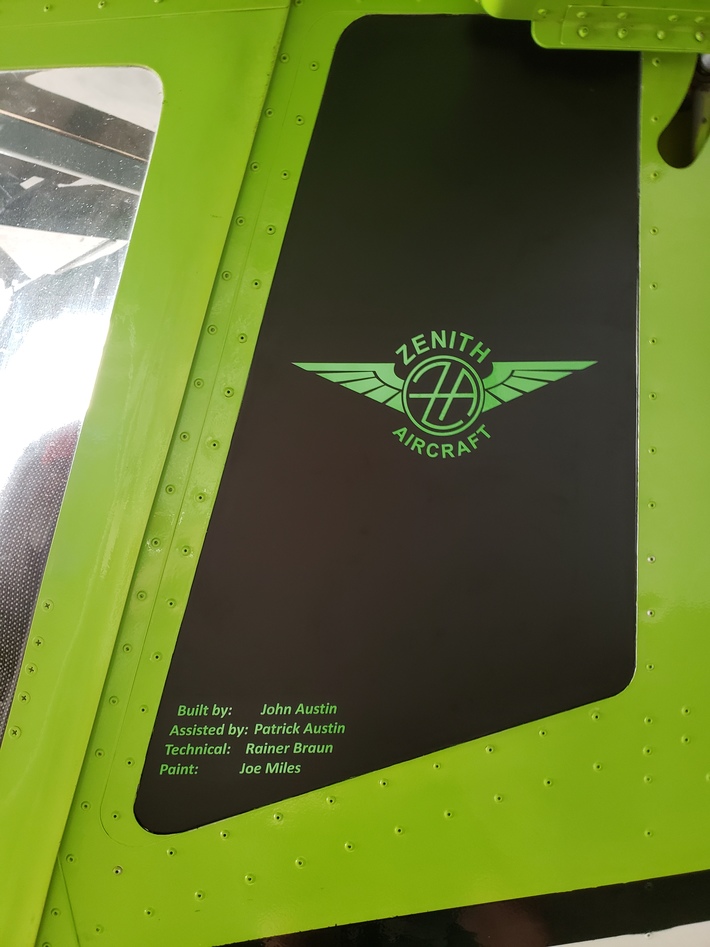 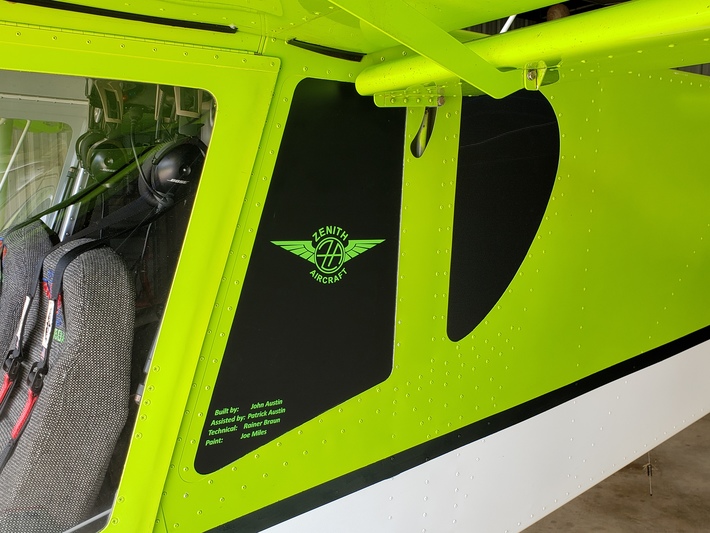 Short of drilling out dozens of rivets and replacing the window, this was the best solution I could come up with and actually, like the uniformly darker look of the windows!

John, no matter what you do with the "Gecko" it will look super!! Nicely done...again!

I like your "Lemonade" solution. Plastics have funny and variable characteristics. Many builders don't know that regular blue Loctite threadlocker makes acrylic (plexiglass) crack because of the incompatability with the plastic.