Never Say Never - The Slats Are Back!

When I built my STOL 750 about 9 years ago, the Cruzer did not exist.  I had a 2100' turf strip and all my buddies had strips at least as long.  So, not needing "superSTOL" capabilities, nonetheless I was impressed with the solid, all-metal construction of the STOL 750, the unparalleled visibility, and decided to build one!

I had previously flown a STOL 750 both slats-on and slats-off, so during Phase 1, I tested my 750 in both configurations.  I later decided to remove the slats, add StolSpeed VG's, and did some clean-ups with fairings, 600 series tires, etc. to enhance the cruise speed - eventually ending up with a solid 82+ kts cruise.  I put about 600+ hrs on the 750 in that configuration and loved every minute of it!

HOWEVER, it seems STOL is getting more popular by the minute, and I'm not flying cross-country as much as i used to, so while at the Zenith Homecoming in Mexico, MO, recently, I decided to enhance the plane's STOL performance by re-installing the slats and installing bigger tires when I got home.  Roger, the demo pilot at Zenith, is a very poor salesman! ;>)  Instead of convincing me I needed to build a Super Duty, etc., he said, "You don't need to build another airplane - if you re-install the slats, it'll be like a whole new airplane!"

When I returned home from the Zenith Homecoming, I re-installed the slats, put 21" tires on the mains and the 800 series Carlisle on the nose, and got re-acquainted with my STOL 750!  It was like getting back on a bicycle - it all came back to me!  On my first flight, I flew up to KCSV (Crossville, TN) and proceeded to land right on the numbers.  It was a fairly long taxi to the first turn-off!  Some wag in the pattern broke in on the radio and said, "Next time, just land it on the ramp and save the long taxi!" LOL!

So, I'm back into re-discovering the joys of STOL! 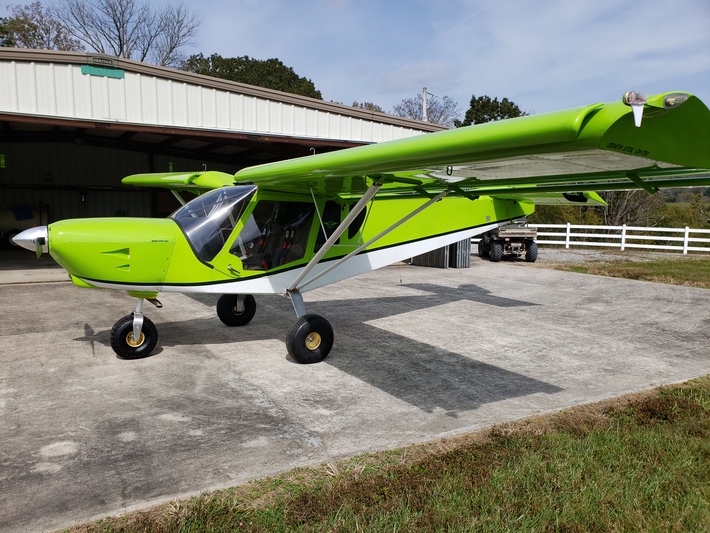 It is cool there there is a whole continuum of configurations you can fly a Zenith! You just won't find this many other places.

BTW, I found that when I put the slats back on, my 750's tail modifications (HT fences and elevator tip extensions) still lets me hold the nose off and lower it a bit more gracefully as opposed to it "plopping" down like it  used to do when I had the slats on and no tail mods.

did you notice any flying characteristics changes between slats and no slats around center of gravity ?

seems like removing the slats would move the center of lift slightly aft ?

There's not much effect on CG or center of lift - obviously it is moved back slightly with slats off, but it is so minor that it doesn't even require any trim changes!  The 750 STOL has a distinct stall without slats, not so with slats.  With slats you can descend steeper and not pick up as much airspeed, but I used to have the classic 750 STOL nose-drop if you get too slow in the flare to land.  Without slats, the plane penetrates better and just releasing back pressure keeps it flying and landings are pretty conventional compared to other non-slat planes.  However, I modified my HT with fences and tip extensions so I when I put the slats back on, I don't seem to have the nose-drop problem any more!

awesome !  thanks for the info, any chance you have more photos of fences and tip extensions ?  Did you make those or buy them somewhere ?

Was once going to build mine as a "STuzer" too, then decided probably not. Now I can firmly say, with pride, that I'm entirely unsure what I'm going to do.

I have a new topic.  I broke off a corner of my windscreen and rather than spend $1,000 for a new one, I would like to make a new one.  Has anyone done this in the shape of the usual windscreen?  Has anyone made a three piece custom screen?

To avoid creeping this thread, I have re-posted Mel's reply (above) as a new topic "750 STOL Windscreen Alternatives" in the Open Forum.  Please send replies about his windshield question to the new topic and not here.