I enjoy the videos of Zenith aircraft that are frequently posted, so I decided to make some of my own! The GoPro camera seems to be the most popular, but I was put off by the $400 "bundle" price at AirVenture.  Seeking a less-costly alternative, I ran across some favorable comments on the JVC "Adixxion" GC-XA1 camera. The GC-XA1 retails for $199 and comes with two flexible mounts, a goggle mount, two lens covers and two LCD covers, and a Li-on battery. The camera can record in several formats, the best being 1080p 30 fps HD. You need a high-speed Class 10 SDHC card, which is not included. A quality 32GB card is around $30+. There is a newer model, the GC-XA2 which has better image stabilization and can record the 1080p HD at 60 fps, but it costs $299. I was able to find a new/open box GC-XA1 for $135 delivered.

The GC-XA1 is very compact and doesn't require an external case like the GoPro. It's reasonably waterproof, shockproof, dustproof, and freezeproof. It comes standard with WiFi connectivity. It doesn't have a remote, but you can use an iPhone or Android phone to remotely control it. One big negative, however, is that you can only use WiFi-direct with an iPhone, an Android WiFi connection requires either a router or using your phone as a mobile hotspot - therefore, if you can't get an internet connection on your Android phone (a likely situation in the air!), you can't use it as a remote. Of course, if you mount it in the cabin, lack of a remote is not such a big deal!

I attached a flexible mount on my main strut, about an arm's-length away from the door opening. This way, just before take-off or just after landing, I can open the door and comfortably reach out and turn it on or off or hit "record", etc. The mount uses a 3M adhesive pad to secure it - seems very strong, I don't think it could possibly come loose, but I think I'll attach the camera's lanyard to the strut with a Velcro strap as a safety measure in case something came loose! These pics will give you an idea of the size and where I mounted it: 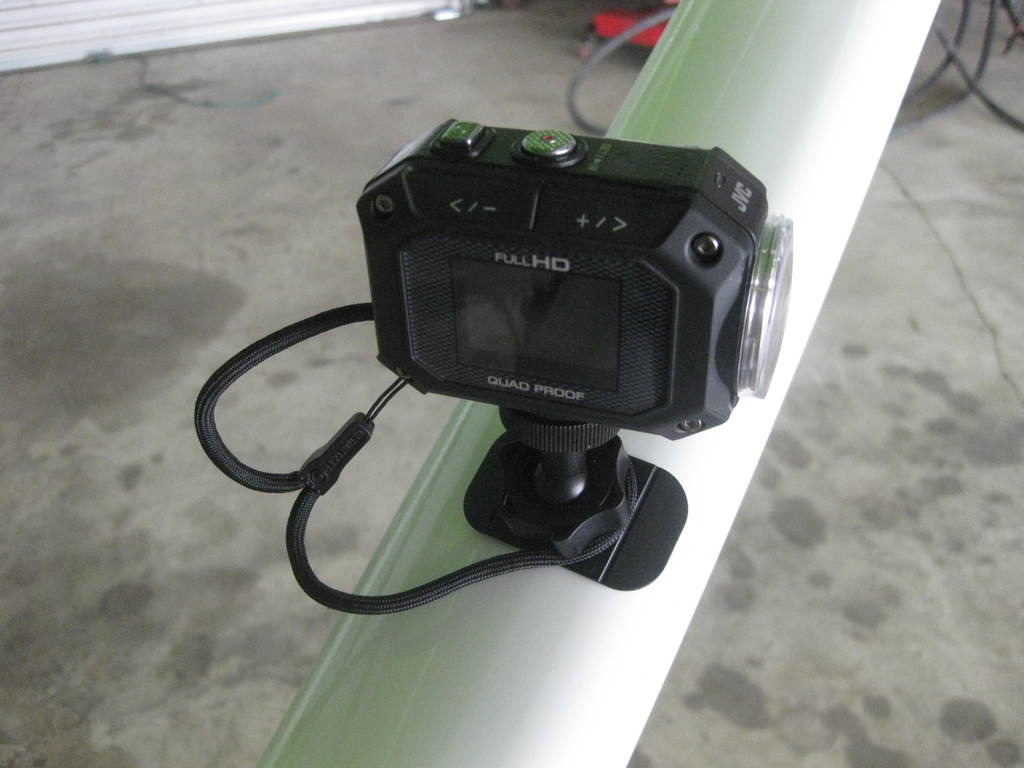 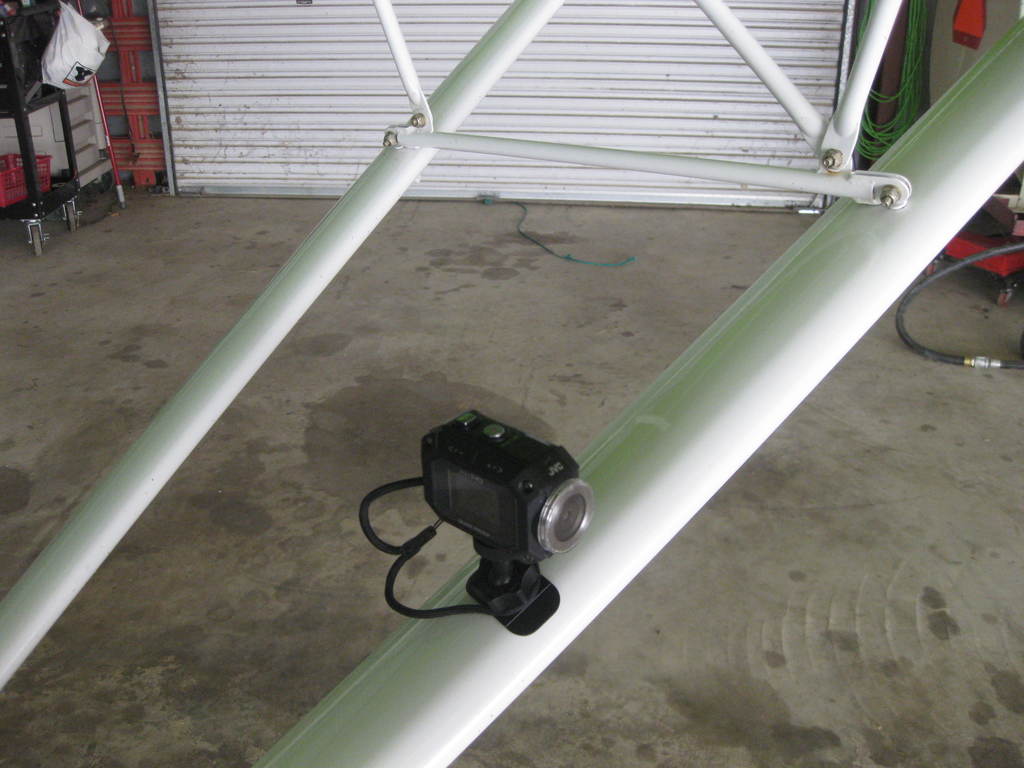 Everything but the adhesive base can be removed from the strut whenever you're not using the camera.

I used AVSVideo to process my first aerial video. I can look at the video on my computer in 1080p HD and it truly is impressive! However, being a novice with video, I uploaded it to YouTube, but noted it only played back best in 360p and so not-so-impressive. Later, I learned that I needed to use AVS Video Converter to convert the .avi file to HD for YouTube. I was successful in the conversion and it now plays in 720p HD, but it's still not as sharp on YouTube as it is on my computer.

Here's the first video - departing from my strip at TN66, orbiting the head of the Sequatchie Valley, a low pass from south to north on the strip, then back to the strip for landing:

Permalink Reply by Tim Garrett on August 23, 2013 at 7:05pm
Thanks for sharing this post. I have one of these cameras and I think Tim Finley on this site has posted video from his JVC camera. I'm always looking for camera mounts and camera ideas. Your video looks very good. I agree, the ubiquitous GoPro seems to be overpriced. They were all over Airventure this year.

It's such a small world! A while back, I was contacted by a local resident who said he "had a friend who would like to fly-in to your airstrip for a visit." Guess who his friend was - Tim Finley!

Then, just a few weeks ago, Tim was driving through the area and I invited him to stop by and scope-out the strip so that when he flies (from MO) here, he'll be familiar with TN66. This was just before AirVenture and I didn't get the bug to get a camera until I saw all the GoPro "deals" there, so the subject of cameras didn't come up.

It looks like a neat little camera. What mount did you use, and where did you find it?

It's the "flexible mount", included with the camera. Actually, you get two of the bases - they have "wings" that let them conform to a curved surface and uses a 3M adhesive - it won't come loose! The ball-mount snaps into the base and on the other end has a standard 1/4-20 camera thread and jam nut. I went ahead and stuck the adhesive mount on the strut because I figure I'll use it often. The strut mount is pretty versatile in that you can look forward, look side-ways at the pilot, or look backwards toward the tail.

Tim Finley pointed me to a 4.5" suction mount that you can move-around on the plane. He's used it up to 120 mph and his camera was still there when he landed! You can get them at: Vacuum Mounts. I may consider that - would be neat for either sitting atop the fuselage looking forward over the prop or on the belly.

Since I already have a RAM ball mount on my instrument panel for my iFly 720 GPS, I got an additional ball with a 1/4-20 thread so I can mount the camera on a long arm I already have (about a foot long). With that setup, I can use it to peek over the glareshield forward, or, swing it over to the far right corner of the panel and look back at the passenger. I think the field-of-view is wide enough I'll probably be able to get the pilot (ME!), too. I've got twin 2+ year-old granddaughters and I think next year will be just right for their first ride (one at a time!). If you've never seen it, I highly recommend Lainey's First Airplane Ride. If that doesn't warm up an old pilot's heart, then you don't have a heart!

They've removed or cut on about everything else, but I think my heart is still intact. :) Thanks for the prompt reply.