I am currently experimenting with a Sonex/AeroConversions "Aero-Injector" throttle-body carburetor on my Jabiru 3300 vs the Bing 94.  The Aero-Injector is extremely simple, very light, gravity-fed, immune to carburetor icing, and has a conventional mixture control.  So far, the weight savings for the total installation is 5.4 lbs!  For those Jab owners with the Bing, let me assure you that mine was working perfectly - as many know, I just like to experiment, so there were no problems with the Bing on a Jab 3300!

There is extensive experience with the Jab 3300/Aero-Injector (previous model called "Aerocarb") in Sonex aircraft.  Since carb heat is not required, the Sonex builders typically just clamp a K&N filter directly onto the carb and this has been quite successful.

The Jabiru USA firewall-forward kit for Zenith aircraft (750, Cruzer, 601/650) has a rather elaborate fiberglass airbox riveted to the firewall that incorporates a carb heat valve and a K&N filter.  Here's a pic from the installation manual: 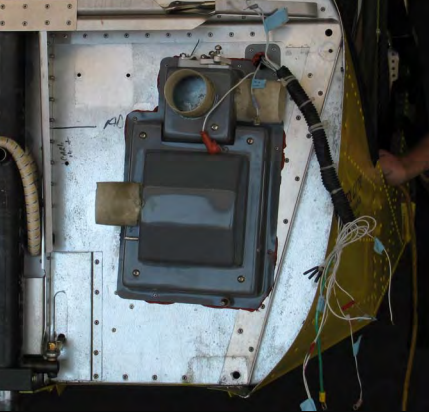 I was hoping there might be someone who either (a) happened to have weighed their airbox prior to installation or (b) have an uninstalled firewall-forward kit and could weigh their uninstalled airbox.

Since my airbox is mounted, I can't weigh it and am curious what the potential weight reduction would be if it was removed and a direct, clamp-on air filter was substituted.  If anyone could provide me with that information, I would appreciate it!  Also, if you do have a weight, please note whether the weight includes the K&N filter inside the airbox or not.  I don't need the weights of the associated ducts, etc.

Looks like a neat installation. So is your Jabiru fuel pump still installed with the fuel pressure controlled by the Aerocarb pressure regulator. Have you considered  adding a carb heat to your installation?

The AeroInjector, an updated version of the AeroCarb, works best with gravity feed only, so the mechanical Jabiru fuel pump was deleted and a block-off plate installed.  Unlike the Rotec throttle-body carb, the AeroInjector does not have a pressure regulator. Since the STOL 750 has high-wing mounted fuel tanks, the gravity feed works excellent!  I've even run the tanks low and descended in a stair-step fashion with pushovers inducing negative G's and the engine never misses a beat!

Sonex/AeroConversions, who manufactures the AeroInjector, claims there has never been a case of carb icing in either the previous AeroCarb or the AeroInjector.  They attribute this primarily to the throttle-body design and lack of a constricting venturi, as in conventional carburetor design, which expands the fuel/air mixture post-venturi and cools it, which can induce icing.  Also, AeroInjectors typically have the air filter directly attached, so the carb is drawing from the cowl air rather than outside air, so it is slightly pre-heated at all times.  Like all things, I would "never say never," but I think the possibility of carb icing would be extremely unlikely!

Actually, I've reconfigured some of the plumbing and I've got an even neater installation now!  I decided to move my "red cube" fuel flow sensor to the cabin-side of the firewall to reduce heat exposure, and while I was at it, I moved the red cube and fuel line over to the left side (pilot's perspective) of the firewall and then, through an AN bulkhead fitting, ran the fuel line directly up to the left side of the carb.  The result is the firewall-forward fuel line is now very short and runs directly up to the carb.  This minimizes heat-soaking even further, but I of course fire-sleeved the fuel line and still wrapped it with Thermo-tec radiant heat barrier for good measure.  I don't have a current photo, but the next time I have the cowl off, I'll get one. Believe me, it looks even much neater now!  :>)

I've got over 120 hrs on the AeroInjector now and have flown it from East Tennessee to Sun 'n Fun twice.  The primary reason I removed the Bing and installed the AeroInjector was to gain a mixture control for more precise engine operation.  I consider that goal 100% achieved!  I really like being able to aggressively lean the engine for ground operations, precisely lean at cruise for efficient engine operation, and having the ability to deliberately enrich the mixture for additional cylinder cooling if necessary.  I also like the fact that, like the Jabiru, it is a very simple design (only two moving parts!) and fits well with the KISS (Keep It Simple, Stupid) principle.

A secondary benefit was removing the airbox, carb heat muff, engine fuel pump, all the associated fuel plumbing and SCAT, and removing the relatively heavy (compared to the AeroInjector) Bing carb.  This resulted in a 7+ lb net wt savings which of course goes straight to increased useful load!

The engine runs great and there have been no dramatic changes in performance.  Since one can precisely lean, there's been about a half to one gph improvement in fuel consumption at cruise.

The biggest negatives?  The AeroInjector is extremely sensitive to heat-soaking and fuel plumbing issues.  My speculation is that since it has no carburetor bowl, any fuel vapor bubbles go through the carb and can cause what is commonly called "burps" - very slight misses or hesitation in the engine.  If frequent, these can be alarming, but the consensus seems to be that while they are annoying, they are not likely to cause an engine to die or lose power.

So, one must carefully route fuel lines to avoid heat sources as much as possible, insulate the lines (in this latest and likely last configuration, the only insulation is the fire sleeve and Thermo-Tec radiant heat barrier and no additional foam insulation, etc.), and avoid any down-turns in the fuel line that might create a trap where fuel vapor bubbles can accumulate.  I spent quite some time tinkering with the fuel line and eventually rotated the carb 180 degrees so the fuel inlet came in at the bottom (to avoid a vapor trap at the top of the carb), moved my firewall fuel bulkhead fitting from the right to the left side of the firewall (the right side location was favorable for the Bing setup and the left side is more favorable for the AeroInjector to achieve the shortest, most direct fuel line), removed the gascolator and installed a fuel filter inside the cabin (to shorten fuel run forward of firewall and reduce heat soaking), and moved my "red cube" fuel flow sensor inside the cabin (again, shorter firewall forward fuel run and reduce heat soaking).

All this re-routing, etc., seems like a lot of trouble, but I was retrofitting to a previous Bing installation.  If one was installing the AeroInjector initially, then the installation could be optimized for that and would be simpler.  Of course, the real reason I did all this is that I like to tinker and optimize, so it was a fun exercise for me!

The AeroInjector also has one little annoying trait - even with the mixture completely off, it tends to slowly drip a little fuel after shut down.  One quickly learns to kill the engine with the fuel valve shut-off rather than the mixture to be sure the fuel flow is completely stopped and no drips after shut-down.  I've always had the habit of turning my fuel selector to "off" after shut down, anyway, so it was no problem for me.

There you have it - the positives and negatives.  There is nothing wrong with the original Bing installation, I just prefer having more control of the engine operation.

Ironically, the day after I wrote the above response, we had the hottest day-ever this year with a high in the low-to-mid 90's F.  I flew to an EAA fly-in where the plane was parked in full sun, had a great time eating hot dogs and all the fixin's, and then in the hottest part of the day, fired up and flew home.

The result? Instantaneous engine start and not a single "burp" or hint of fuel vapor issues!  A year earlier, I had flown to the same fly-in and it wasn't quite as hot, but the engine had "burped" badly on taxi but cleared with full throttle.  So, apparently, the re-routing and resultant shortening of the fuel line firewall-forward works!

I've flown all summer with the last configuration I described above and have not had the slightest hint of a "burp."  I happened to have my cowl off yesterday and took a pic of the fuel line routing for any interested: 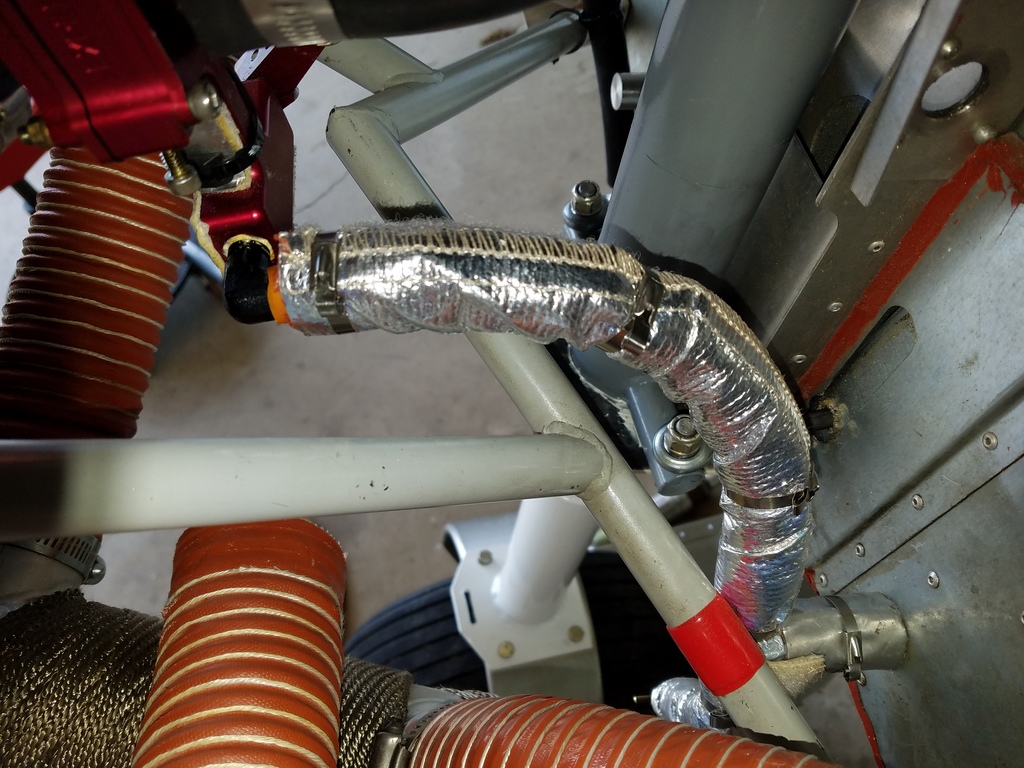 The fuel line is coming off a tee fitting on the firewall and is fire-sleeved and then covered with a Thermo-Tec radiant heat barrier.  As you can see, it sweeps upward and then enters the lower aspect of the carb, so there are no potential vapor traps in the line, which I think is key to avoiding "burps."

Also, I had minimal clearance between my air cleaner and the metal tube the bungee is hooked over.  I put the old 90 degree rubber duct back on the carb to reposition the air cleaner: 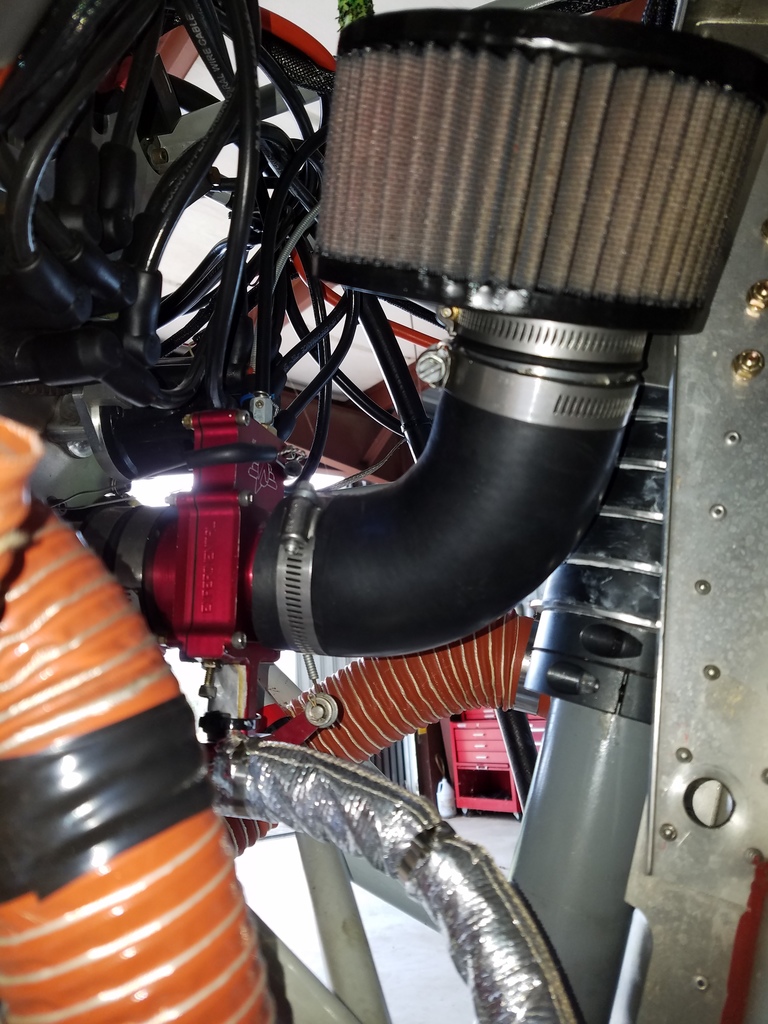 Ironically, my EGT balance was even better after introducing the 90 degree duct!  My theory is that it induced some swirl in the intake air that just happened to help distribute the mixture better.  Also, I just completed installing the new Zenith "Donut" Nose Gear Suspension system and this would have not allowed the air cleaner to be directly attached to the carb due to clearance, so the 90 degree duct solved that problem, too!

Confession - I made just one more tweak, but knowing me, I'm NOT going to say this is the "final" one! Ha!  After re-installing the 90 degree intake duct so the air cleaner would clear the nose gear suspension donut stack, I remembered I had a similar K&N air filter (RU-0650) that was slightly less-tall.  I dug it out, installed it directly on the carb with no duct, and it easily cleared the suspension. Fortunately, I again had even EGT distribution!  So, the result is a more compact/"cleaner" and lighter installation. Permalink Reply by Juan vega on October 29, 2018 at 3:13pm
The box is designed to act as not only a filter intake holder but to hold the valve for carb heat.

The box is designed to act as not only a filter intake holder but to hold the valve for carb heat.

That's why it could be removed in this installation - since it is a throttle-body carb, the AeroInjector does not require carb heat.  Sonex/AeroConversions claims there has never been a reported case of carb icing.  It also probably doesn't hurt that some of the intake air is being drawn from inside the cowl, so it is warmed to some extent, anyway.

Recently I happened to get a picture of my fuel line and "red cube" fuel flow sensor mounted on the cabin side of the firewall: 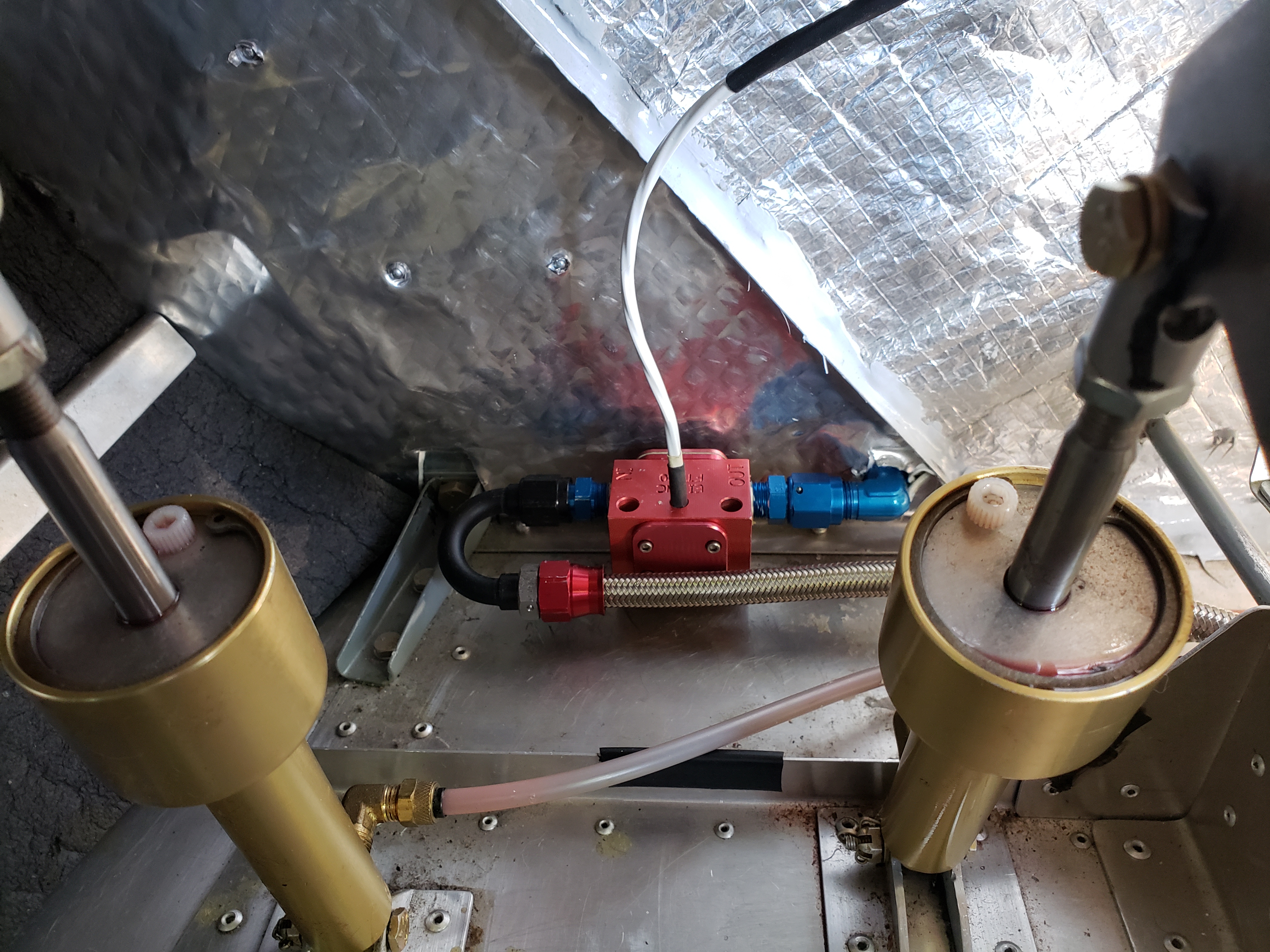 The fuel line is coming over from the center console where it comes off an inline filter connected to my Andair fuel selector valve (as previously described). Despite the 180 degree fitting upstream and the 90 degree fitting downstream, the sensor has remained extremely accurate and did not require re-calibration when moved from the original firewall-forward position.