This Week I installed an iLevil AW unit which provides pitot-statically driven AHRS information, GPS, and ads-b to the iPad.

Some may view it as a frivolous expense, but here's why I felt it was worth it:

-the iLevil is $1300 and works with both my iPad mini and my Nexus (more on these below).  I don't include the cost of the tablets because most folks these days fly with an Ipad anyway.  if you insist on adding the costs, I got the iPad mini 2 for $200, and the Nexus 7 for $150.  The ram mount which was modified to work with both was about $25.

-GRT Mini X-  $1800+/- when equipped with remote magnetometer and moving map software.  GPS included. Should have better brightness and glare properties than the iPad.  Meets most of my requirements, but it looks to have an awfully small display (4" diagonally).  It doesn't include ADS-B for that price either, and I'd also still likely have an iPad in the cockpit for charts and trip planning.   This seems to be the best competitor to the current setup but costs more and doesn't have as much functionality.

Gotta be fair, right?  An actual EFIS is made to be sunlight visible in the cockpit.  The iPad is prone to glare and the screen can be washed out in full sunlight.  It also gets pretty hot and I've heard that they can shut down due to heat, although that's never happened to me.  That's why I usually fly with the Nexus 7 (2013 model) which I have never had a problem viewing in the cockpit.  It is vivid and bright, and doesn't seem to get as hot as the iPad does.   The apps available to drive the AHRS and Sythetic Vision are far superior on the iPad, though....

The best app for flight planning with the Nexus (Andriod OS) is AvNav EFB (in my opinion, of course), but it doesn't offer an AHRS display, it's just moving map with ads-b.  Naviator has both AHRS and Synthetic Vision, but it's mapping/flight planning software is atrocious.

With the iPad, I LOVE the FlyQ EFB for flight planning, weather, airport info...  in flight with ADS-B it is the easiest to use.  It works with the iLevil to display synthetic vision in full or split screen, but only reports GPS data for heading, altitude and ground speed.  It will accurately report pitch and bank, but leaves off a bunch of really great qualities that the iLevil AW has to offer.     The Levil tech AHRS app supplements this, however by offering a large AHRS display alongside battery, satellite, and antenna info.  It, of course, displays the pitot-statically driven airspeed, altitude and vertical speed indicator.   It is easy to swap back and forth from one app to the next, and is a workable solution, but I don't love it.

The problem is the display on the Levil Tech app. For some odd reason, they chose to use three small animated round guages for all of the speeds instead of the tapes one would expect to see at the sides of an AHRS display.  It works, but it's small, it's not intuitive, and it doesn't make the best use of the screen real-estate.  Take a look at pictures online and then compare them to the iHud Remote app that used to be available for the g-Mini ahrs unit.   It's not available anymore, and wouldn't work with the AW anyway, but it's exactly what I'm looking for in a display.

Finally, I found the Xavion app.  It has a sweet AHRS display, works with the AW's pitot static inputs, shows the flight plan's course right on the AHRS screen, and even helps find an emergency place to land.  It's exactly what I was looking for.  I don't use it for pre-flight planning, but it's perfect for in the cockpit.   Oh.  Wait...   The sun is shining at just the right angle to wash out the iPad....  if only Xavion worked on the Nexus... 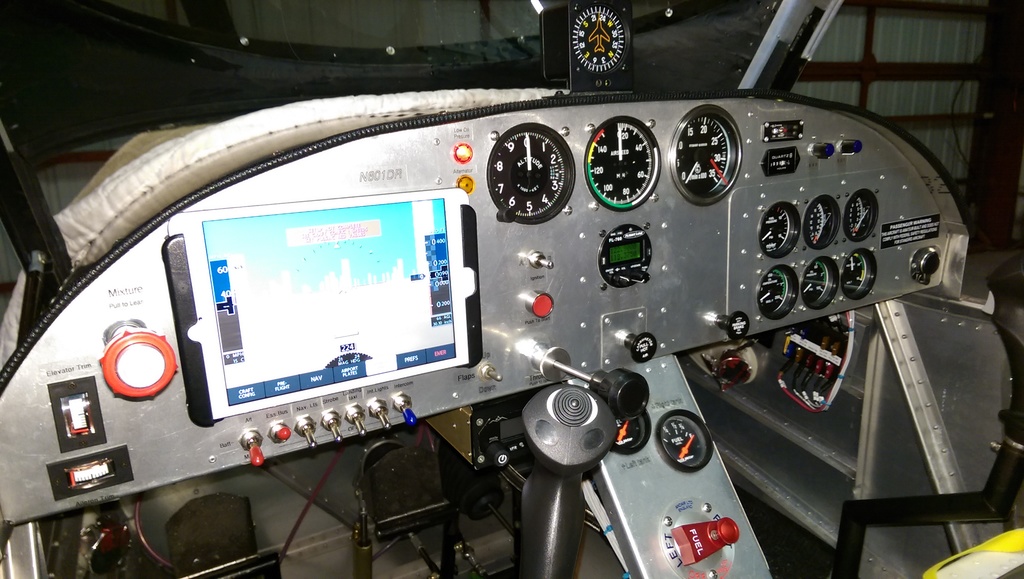 Yes, Darryl.   One must have a grt engine monitor and make a harness to output the data to the iLevil box, but then it is sent wirelessly to the tablet.    I believe the proprietary app is the only one which currently is able to display the info.

Is it possible to display engine info on the ipad as well, wirelessly somehow?

Thanks for the information.  We have a long way to go before CH 750 is ready, but keeping our eye on iPad mini's with iLevel AW.