I just finished installing the Viking steel spring bungee mod in my CH750  Edition I  project which is nearly 80 percent completed.   Although it took me longer than I expected, I am happy with the modification and glad I took the time to add the mod.  Here is a rundown on my installation experience.

The engine was installed (C90) before the mod and the firewall well populated with components, nevertheless, the changeover was not difficult.  However, I did remove the nose gear strut and bottom V bearing, also not a problem, which made the mod easier.

I had already removed the Cessna muffler/exhaust system, so I had plenty of access.  My issues were few, but required a little extra effort.  First, The short horizontal support tube behind the NG strut was tight in the side channel holes.  Had to tap it free with a wooden dowel used as a drive pin to remove it.  Then I opened the holes just enough with a half round file to enlarge the openings so the tube would position easily with finger pressure. The following pix shows the tube after enlarging the holes, installing side straps, and cotter pins.  Longer cotter pins were used in the final installation. I had plenty of room to deal with this issue after removing the nose gear strut.  Second, my NG strut tube wall thickness was 3/32 inch thick.  Plans called for 1/16, so the lower saddle for the center adjustment rod was slightly too large to fit into my strut tube. A quick trip to a buddy with a metal lathe got the aluminum saddle turned down to the "just fit" proper size.  Third, when I had the side straps installed and tried to position the top aluminum cap, there were no threads exposed for nuts on the two side strap threaded rods. 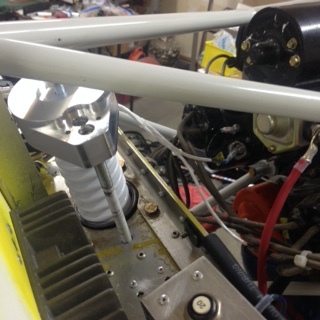 After talking to Jan (Viking Aircraft Engines) and checking measurements, I learned that the problem was caused by two factors:  the position of the lower horizontal tube that supports the side straps was located 5 mm further down the strut channel than called for in the plans - 295 mm vice 290 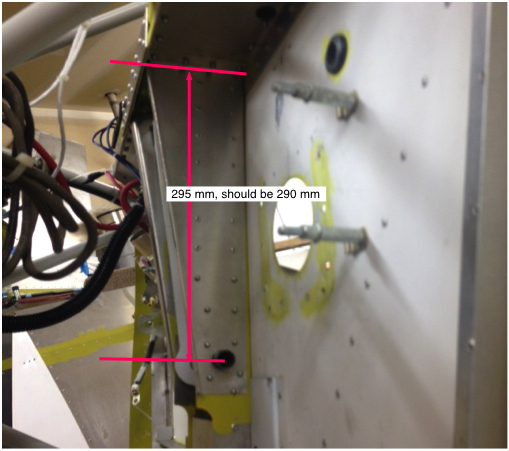 - and the steel spring was slightly longer than designed thus preventing the threaded side rods from being exposed as required through the top aluminum cap.

But a simple fix took care of this issue.  Jan recommended I compress the spring with the nut on the center threaded rod (which was adequately exposed above the top cap) until the side threaded rods are exposed.  Doing this carefully keeping the top cap level, I was able to compress the spring so that both sides of the threaded support rods allowed washers and nuts to be installed. 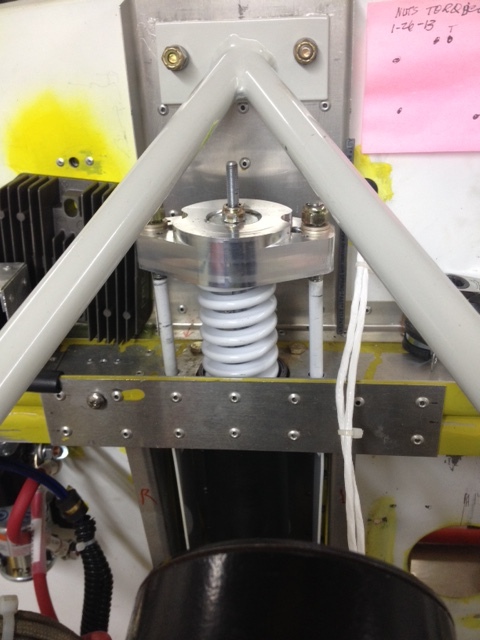 I checked the freedom of movement of the strut (nose off the floor) by grabbing the NG fork and turning from stop to stop.  Movement was smooth but it was not self-centering in the V groove when I released my hands.  See video in "My Videos".  That result is probably normal.  Also, as I reached the extremes of the rotation, the side straps tightened up when the horizontal bar rides up on the high side of the V bearing.  I do not have my rudder installed or the rudder stops.  Perhaps the rudder stops will prevent the rotation of the NG such that the high side of the V bearing cannot be reached.  As the pressure increases on the high side of the V bearing, the side straps tighten and the bottom aluminum support plate for the V bearing is temporarily moved slightly down and I would think that this reaction is not desirable.  It seems to me that I should compress the spring as far as needed to relieve all pressure from the V block bearing or mill out the V and make it flat.

Perhaps, with the rudder stops installed, this change in tensioning of the side straps is prevented by limiting the rotational movement of the NG strut.  I’ll wait and make a final decision and adjustments after the rudder stops are installed.

Thanks for the kind words, fellas.  If any of you have any questions during your installation of this mod, don't hesitate to ask.  Believe me, there were a few questions I had since each installation is a bit different depending on when during your construction you decide to make the change and what sort of engine mount you have.  In my case, my top bars of the engine mount were preventing me from drilling a perpendicular hole from above for the two side support straps.  But using a long drill bit, I got them in the right place and straight enough to work perfectly in spite of slightly off plumb.

Good to see this write up - I just ordered mine and I'm hoping to do the bungee replacement without removing the engine or frame. Looks like a very worthwhile mod.

Comment by Normand Lambert on January 13, 2016 at 10:49am
Hi Bill, the greatest problem would be if the Pin hole was not reachable and not at the right height. To make a new hole at the right location is a challenge if all the stuff is in the way. Otherwise easy mod. Regards, Norm