On the two days prior to the show, ASTM International held a Light Sport Aircraft (LSA) committee meeting which included a presentation from the FAA on their "Special Review" of the Zodiac CH601XL, highlighting what the FAA has done since the NTSB issued its Safety Recommendation (in April'09). The FAA's official report on this will be made available shortly. AMD, manufacturer of the factory-built ZODIAC CH 650, flew an upgraded Zodiac CH 650 LS to the Expo with the recently installed Upgrade Package.
We met with many members of the aviation press, as well as existing owners and builders, to update them on the status of the Upgrade Package kit, and were pleased to be able to show them this nice upgraded Zodiac CH 650.
Below, AeroNews.net updates viewers in front of the Zodiac CH650LS:

Zodiac builders and owners were pleased be able to see an upgraded Zodiac CH 650, and were able to pore over it to inspect the many upgrades of the beefed up aircraft.
The upgraded Zodiac looks just as sharp as before: An untrained eye would probably not notice any differences: 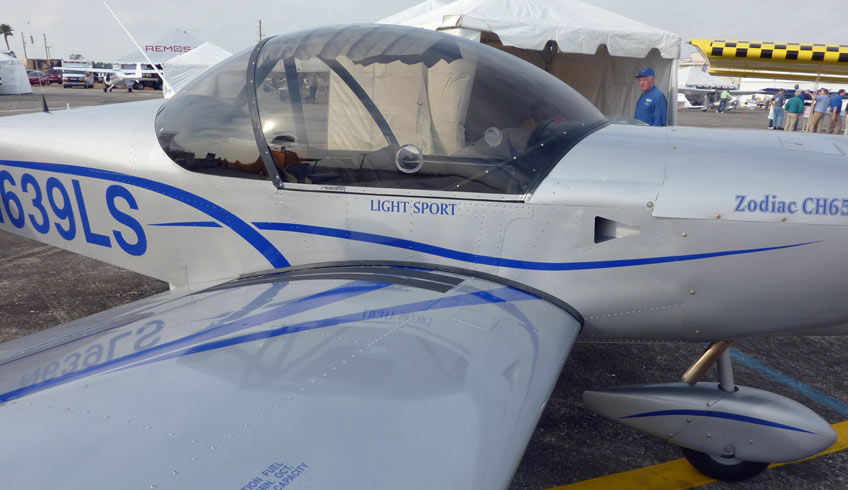 Speaking of differences, those of you familiar with the Zodiac CH 601 XL / CH 650 (and especially its construction) are well aware of the many similarities between the CH 601XL / CH650 and the Sport Cruiser airplane from the Czech Republic, and the fact the the Sport Cruiser's original manufacturer also built several hundred Zodiac aircraft (including an S-LSA version). Well, the big news at Sebring this year was the fact that the Sport Cruiser is now rebranded as the Piper Sport, to be marketed and distributed by Piper Aircraft.
I've been hearing all kinds of comments and opinions about this news (and I invite you to post your thoughts below). I'm glad that Piper plans to compete in the LSA marketplace with an attractive all-metal low-wing aircraft. Their choice of the Sport Cruiser is maybe a little puzzling, but it further popularizes Chris Heintz' basic and simple design and construction techniques (as used in the Zodiac). It's too bad that, like Cessna, Piper is also importing its LSA rather than building them in North America. Our own experience has shown that imported components have been increasing in cost (due to the low U.S. dollar) while American-made goods have remained relatively constant: The Continental O-200-D engine now costs about the same as the Rotax 912S engine, and at the Sebring Expo, Rans Aircraft was offering a well-built American-made S-6 for $63,000.

On Friday my brother Mathieu presented a Forum on the Zodiac XL updates, first explaining the steps involved with the Upgrade Package kit, and then going over maintenance and inspection lists. We then answered builder and owner questions about the upgrades.
On Saturday, I presented a Forum on the STOL CH 750 light sport utility aircraft, going over the design and construction of our newest STOL aircraft.

Bad weather kept all of Zenith's demonstrator planes grounded in Missouri (I don't think we've ever had this much fog for so long!) but we were glad to have samples of our LSAs at Sebring. Doug Norman also flew his just-recently upgraded Zodiac to the Sebring show on Sunday, and here we have Sebastian Dewhurst's STOL CH 701 aircraft on display at the Zenith booth next to FlightCrafters: Another Zodiac on the field was brought in by Jan Eggenfellner sporting a brand new engine installation:

This auto conversion based on the Honda Fit car engine boasts 117 hp at under 200 lbs., and was installed on a Zodiac CH 601 HDS. Note that the Zodiac firewall has the same dimensions as the STOL CH 750 so that this firewall-forward installation could also work on the high-wing. Click here for details.

The Sebring Sport Aviation Expo continues to be an excellent show for and about light sport aircraft, and is an excellent venue with a relaxed and friendly atmosphere. Despite not being able to bring our own planes in, I believe we had a successful show this year and I enjoyed seeing many familiar faces once again, and meeting with new builders and owners.

Comment by Fred Stratman on January 28, 2010 at 9:10am
I agree Stefan, It looks intriguing. An undersquare engine capable of high RPMs when you need them. Swinging a 75" prop it should be able to move a lot of air for short takeoffs.

Comment by Larry Oswell on January 25, 2010 at 8:32pm
I have flown the sportcruiser and I think it will fit well in the Piper Family. My 750 is coming along, with the Wings, Slats, Flaps. Horiz Stabilizer, Elevator done along with the Rudder that I build at the workshop on Oct 15th. Time to start the fuselage next. We are driving to Florida and I would like to stop and show the factory to my wife about Feb 4 or 5. Would that be a problem? I am also having a problem finding a resonable priced O200. Do you have a spare laying around? Hope to see you in Feb. Larry Oswell