Rudder complete and observations from the Zenith Homecoming

Part 1 of my Cruzer is complete: 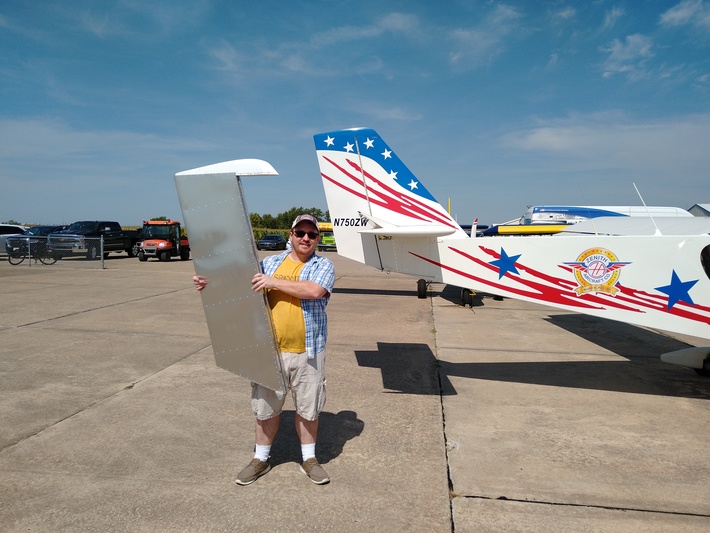 The kit and the instructions were straightforward.  However, there are two things to note if you are looking to build one of these.  If you live on the coast like me and want to use the Cortec corrosion inhibitor, it would behoove you to figure out exactly when you want to apply it in the steps.  The stuff is basically liquid latex and gets tacky very quickly.  If you remove a part after you have applied the Cortec you will need to use acetone solvent to remove it and then re-apply it.  You don't want to be like me and forget to perform a step like deburring the rivet holes on all the ribs after you've applied the Cortec, clean all of the ribs, deburr all of the holes, and reapply the Cortec only to realize that you forgot to ream out the holes to their final size and will have to do that all over again. 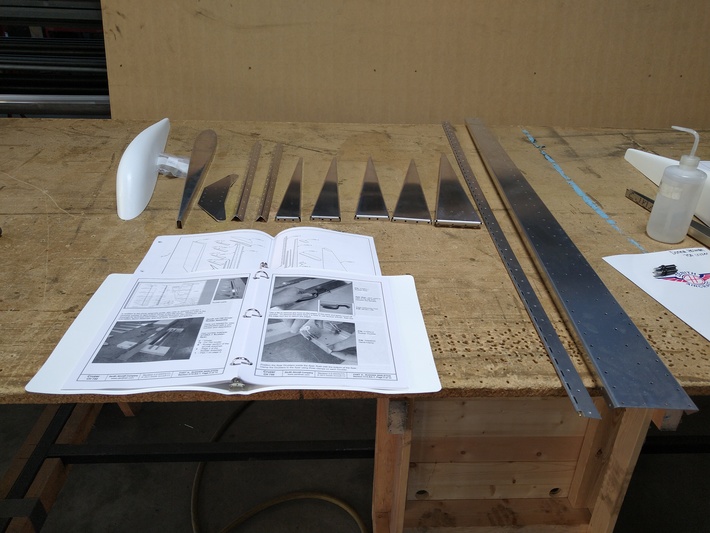 I would recommend leaving the riveting of all the parts on the rudder (or any other part of the airplane) as the absolute last step with the Cortec.  This is the process flow that I settled on by the second day: 1) use Clecos to fasten the parts together, 2) measure and/or drill out any holes that either don't exist or need to be properly aligned (i.e. the rudder tip rib and cap, the tip rib angle bracket, and the doublers at the bottom of the rudder spar), 3) ream out every last hole that you didn't drill yourself to its final size, 4) deburr all of the holes in one step so you don't miss any, 5) apply the Cortec if desired, 6) reassemble with Clecos and rivet. The second thing I learned was kind of implied above.  While Zenith markets most of their kits as being "final hole sized" I found that in practical terms this was only true for about half of the holes.  The other half were nearly final sized, but were just a smidge under.  This meant that it was either impossible to get a rivet in or possible to force a rivet about halfway in, but then extremely difficult to get it back out without damaging the metal.  Which holes were undersized was basically random.  This most likely occurred somewhere in the CNC process.  CNC machines are great, but they aren't perfect.  Milling bits wear down with time, and a machine that is even a fraction of a millimeter out of alignment can lead to tolerance stacking issues. 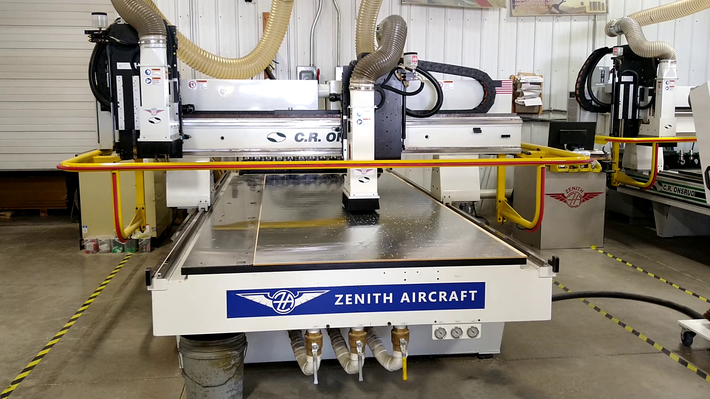 The solution for the builder is simple.  Ream all the rivet holes out with the appropriate drill bit and deburr.  If you are considering a Zenith kit do not let the fact that they aren't truly "final hole size" dissuade you.  The fact that the holes are either already properly sized or nearly so means that the reaming process is simple and adds only minimal time to the build.  I know that you may hear in some of the literature that the CNC machined rivet holes are so precise that you won't need to deburr them, but it is considered good practice to deburr all rivet holes anyway.  I noticed that most of the CNC machined holes had a slight ridge around the rim, so you'd still need to deburr them either way.  It's just better to know this before you start riveting things together and find out the hard way that not all of the holes will take a rivet and will have to be reamed and deburred in place or the rivets that you just put in will have to be drilled out so you can install the part properly. 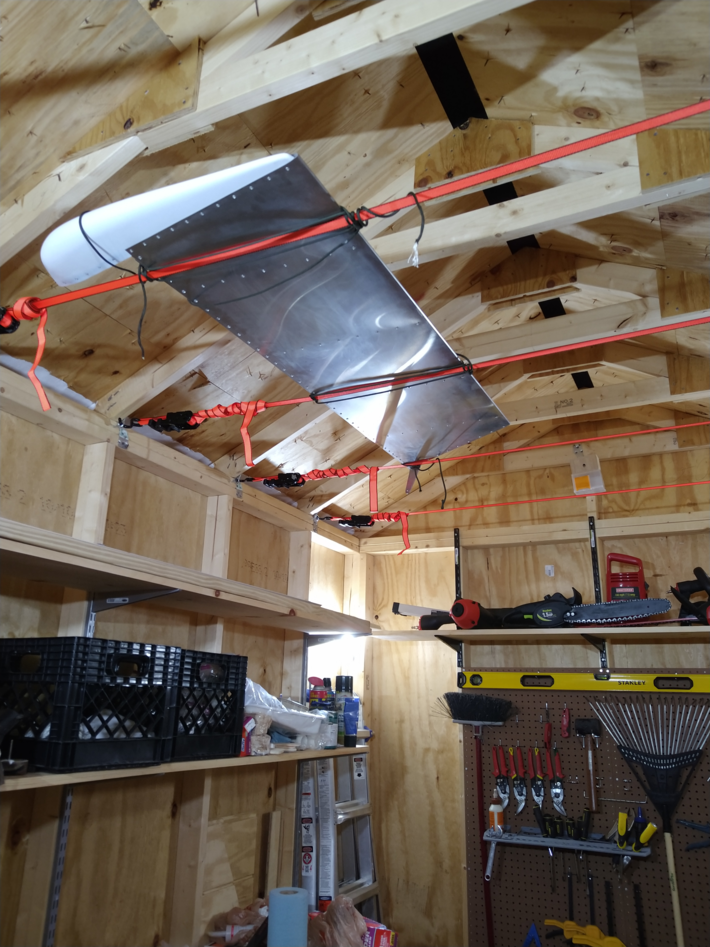 The rudder in its semi-permanent home until it gets put on the airplane.  I added an extra foot on the design of my work shed specifically so I could store airplane parts in the rafters.

When it was time for my flight in the Cruzer with Roger the first thing I checked was how easy or difficult it was going to be to reach things on the instrument panel past the center line (see my previous blog post about this). While it still was difficult to reach past the center line of the panel without switching hands, this turned out to be less of an issue in practice, in part because the panel in N750ZW was laid out with this taken into consideration with most of the critical instruments right in front of the pilot. I'm going to keep this in mind when it comes time to design my panel. Flying with the Y tiller was incredibly intuitive. There's basically 0 learning curve. Considering how difficult it would be to get into and out of the aircraft with dual sticks, I think the advantages of the Y tiller outweigh the disadvantages. The view out of the aircraft was even better than any pictures or video that I've seen made it out to be. 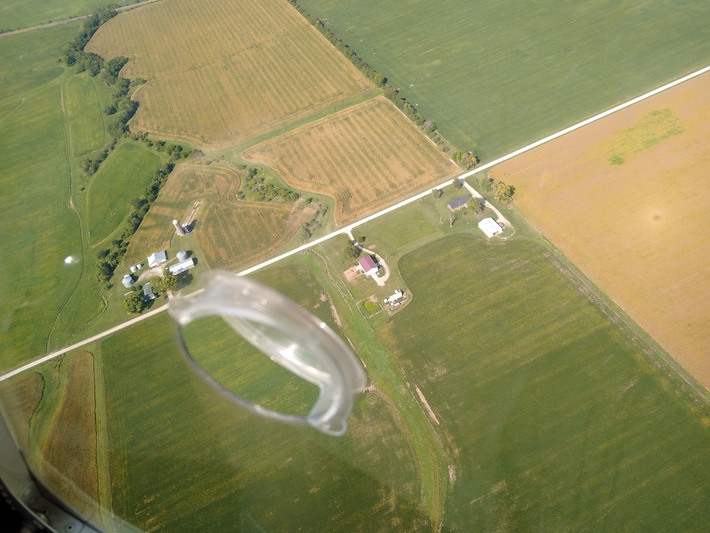 Because the fuselage area around the cabin uses a welded tube frame, the "A" pillar is very small presenting a near wrap-around view from the cowl down to the bubble doors.  The view is better than any high wing that I've ever flown and rivals any low wing except for those with bubble canopies.  One thing that it lacks that bubble canopy aircraft have is the greenhouse effect you get when you close a bubble canopy.  This is one of the main reasons why I went with a high wing. 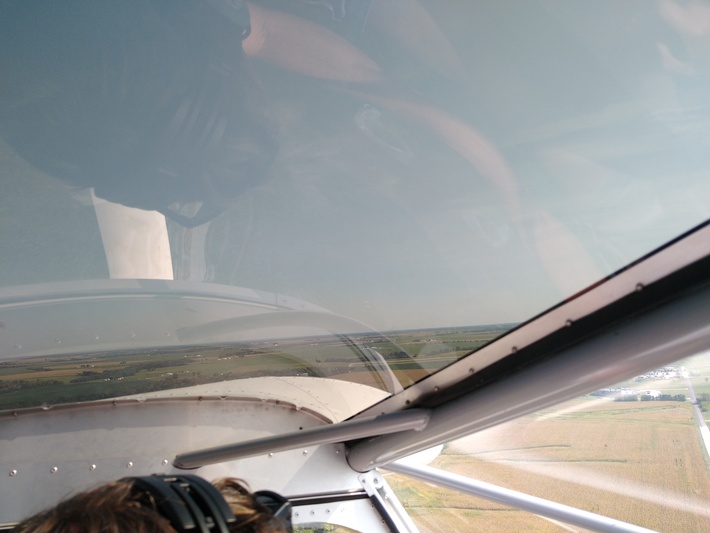 The view turning base to final on Runway 18 at KMYJ.  You can see the threshold for Runway 24 through the top window.

My main reason for staying for the Homecoming and my main reason for booking the September rudder workshop was to talk to William Wynne about my Corvair engine.  I had some valve covers to turn in as cores and I also wanted him to look at the cooling fins on my cylinder heads to see if they were too far damaged as well as ask him questions about the head studs that backed out on me when I disassembled the core engine.  He stated that the fins were fine and that I could carefully bend them back into shape with a hardwood shim and carefully tapping with a hammer.  His conversion manual says that the reproduction head studs from Clark's Corvair are not good enough but don't specify what should be used instead. 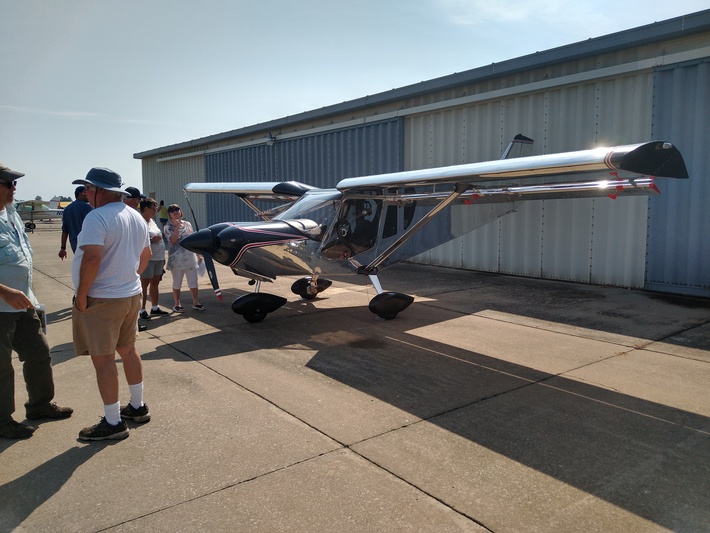 When I asked him about this he said that he would send me some serviceable head studs from a donor block when he gets back to Florida.  I then asked him about the Corvair Assembly Manual from SPA.  To order one you need to give Dan Weseman at SPA the conversion manual serial number and mine didn't have one.  William said that he stopped putting serial numbers on conversion manuals a few years back and that the assembly manual was only for the 3L and 3.3L engines.  He also mentioned that the 2850 CC engine was 95% of the displacement of the 3L.  When he said this I immediately thought back to a conversation that I had with Bob Clark that morning at breakfast.  I happened to sit down at the same table as him and eventually the conversation about the airplane turned to the engine.  The reason why he went with the 3L was because the 2850 CC engine wasn't available at the time.  He mentioned that when he completed the engine that Dan told him it was a 115 HP engine.  William doesn't strike me as the kind of person who would associate himself with the type of people who liberally massage the truth about their products, which is unfortunately an all too common thing in experimental aviation.  I wanted to figure out why Bob's 3L makes 115 HP when Dan advertises it as making 120 HP.  Once I got done talking to William I pulled out the calculator app on my phone.

The only difference between the 2850 and the 3L is 2mm extra diameter on the cylinders.  The pistons are of an identical design, just different diameters.  They both run on the same cam profile.  They are identical for all practical purposes except in displacement.  All other things being equal, a proportional increase in displacement should lead to an approximately proportional increase in power.  There's a 5% difference in displacement so there should be a 5% difference in power at the same RPM.  This got me wondering what RPM Dan was claiming the 3L made 120 HP.  The faster you can get an engine to spin, the more power it will make, assuming that the engine can handle the increased fuel/air mixture and exhaust flow rates.  Once I got back to the hotel room that evening I looked up what Kitplanes Magazine published about the Corvair engines in their Engine Buyers Guide: Dan publishes his HP figures at 3,300 RPM and William publishes his at 3,000 RPM.  This makes sense as Dan optimizes his engines for his SPA Panther aerobatic aircraft.  The ground adjustable prop that SPA uses for the Panther is probably set to full fine pitch for optimal climb performance.  This would also allow the engine to spin faster and make more power.  Meanwhile, William optimizes his engines for cruise performance as they tend to go into aircraft like the Zenith 601s, 650s, 750 Cruzers, KR-2S, and similar aircraft.  With a ground adjustable prop set to a coarser pitch, the RPMs would be limited, thus reducing max power, but the propeller would be better optimized for cruise flight.
So Bob's 3L probably can make 120 HP if he set his prop to a fine pitch setting.  This would add about 100 extra FPM to his climb rate, but would hurt his cruise performance.  His prop is probably set to an intermediate setting that limits him to about 3,000 rpm.  This is why Dan told him his engine makes 115 HP.  That's all it will make at that prop setting, but any engine would be similarly limited.
Using this information I made a chart that estimates the HP and torque figures for the various displacements made by William Wynne and Dan Weseman: 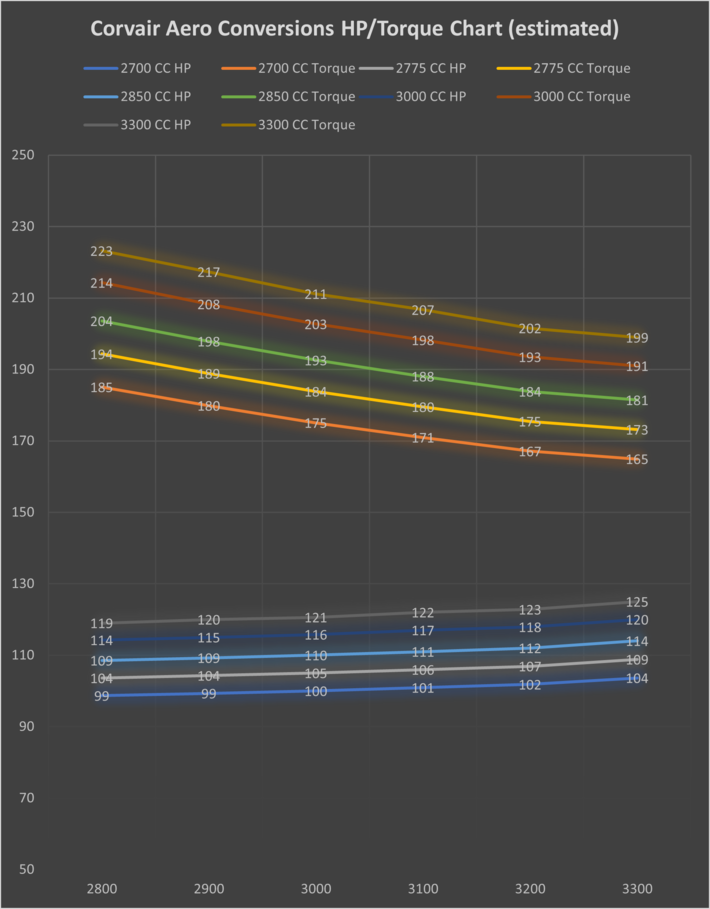 There isn't much documentation on the 2775 CC engine listed in the Kitplanes article, but the best that I can figure is that it is similar to a 2700 CC conversion, but uses Clark's Corvair cylinders with a +.060" overbore and the Clark forged pistons that William recommends for the 2700. EDIT: I have found information about the 2775 on William Wynne's page here: https://flycorvair.net/2013/02/05/getting-started-in-2013-part-15-2....  Turns out it was something that WW was looking at building about 10 years ago but didn't, probably because the market wasn't there.  It would have used remanufactured Corvair cylinders with a +.060 overbore and pistons of the same design used on the 2850, 3L, and 3.3L.  WW calls all engines regardless of bore that use Clark's Corvair forged pistons as 2700 engines.  The 100 HP at 3,000 RPM figure is probably an average of the HP range between stock bore and +.060".  It's probably closer to 97-98 HP with a stock bore and 102-103 HP with a +.060".
Note that all of the engines above have an approximately 5% difference in power output compared to the engines adjacent to it.