I once had a really cool house with a really nice sized garage, that was 6 months ago. The plan was to buy a new home so the house went for sale. It had an offer 5 days after it was listed with the condition we had to move out in 3 weeks. The offer was exactly the asking price so hey, we jumped on it. We were 99% all in on another home so it was perfect.

2 days before the close the deal fell through and we were under contract to move out for the buyer. We were pretty much homeless. So I made a quick phone call and ended up in a duplex, I know the owners (customers) so I was able to switch gears and move in the next day. It was crazy.

We told Tim and Jen it would only be about a 3 month gig until we made another offer on another home etc. Fortunately my kids didn't have to change schools because the duplex is in the same district. Well, the more we looked the less we were able to find. Houses around here sell pretty fast. So my wife and I decided we were gonna build a home and forget the used home idea. We signed a year lease.

So that brings me to the little garage. I gotta tell ya, I hated the idea of renting but it's actually kind of amusing. I kind of feel like a young newly wed again. My neighbors are knuckleheads but he seems to stock good beer so that's pretty cool.

The garage is only 18 x 12 and I have to share it with some non-airplane stuff like bicycles, kids toys and garbage cans. As you can see in the above photo I haven't had time to really organize much since we moved in not to mention I'm redoing the bathrooms this week for the owner of the building.

I need a temporary table that will get me through the year and it has to hold an 8' brake. Below is a quick sketch of the plan. 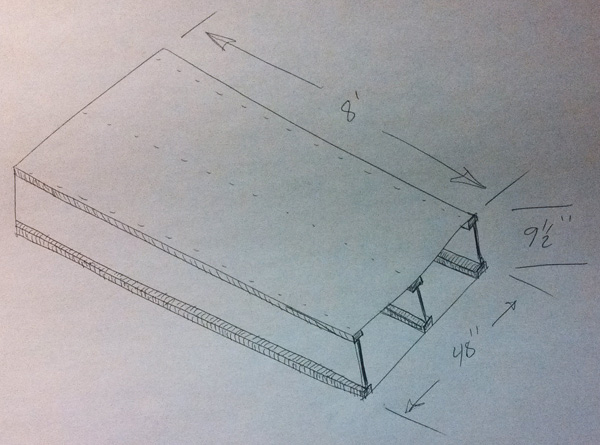 It's nothing more than 2 - 4' x 8' sheets of plywood with 10" engineered "I" joists  to stiffen it up. I've built these before and they are really nice. I can also store stuff inside it. The duplex came with a shed in back that is currently empty and it's a 16' x 10" job. I'm gonna see if I can fill it up and start clearing things away in the garage.

My wife is gonna be pissed when she sees this big table in the small garage. Sometimes people just have to learn to deal with disappointment. The 3 kids are excited so I have a small army to battle her with. It's worked in the past. :)

If worse comes to worse I'l use my kids as pawns. I'll say something like "Hey, this will be good for the kids".

Throwing things away can be quite liberating. lol

The only problem is it is already full. That means no room to store the completed assemblies. I'll find a place though.

i haven't started to cut aluminum either.  I have a 18x18 workshop designed for woodworking so I've been in the process of reorganizing it.  I'ts kind of hard to clear some space when you have machines everywhere....  But hey, a table saw with a sheet of mdf on top of it makes a great...table.

I agree! I am as excited about building as much as I am about flying it one of these days. I have done wood working before but never anything in metal. I haven’t cut one piece of aluminum yet but I am already enjoying it very much. The process of figuring out how I’m going to make the parts, searching to see what others have done and then begin to create the necessary tools and jigs to be able to create an actual aircraft parts is much fun in itself. That’s one of the reason I chose scratch building. It will be challenging on many levels.

I am also concentrating mainly on the rudder (one sub-assembly at a time). It just occurred to me that I could make the bench in a modular way that would also benefit me later, especially in my situation.

I do have a “shed” area. It is a storage room that is attached to the garage (part of our house). It is about 5’x20’. I have a good bit of shelving in there. About half of it is used to keep lawn equipment and the like. The other half is where my tools are stored. I planned to store the parts on the open shelves but the Rubbermaid bins would help keep them better organized than just putting them all on the shelf only.

I too like the idea of being able to purchase any part in addition to scratch building. If I come up against something that turns out to be just beyond me I can still finish the plane.

I once heard a story about a guy who build a Pitts biplane with no garage. All his wing ribs were built on his lunch breaks. Apparently he outfitted his car trunk as a mobile shop and glued one rib every day. In the evening he would cut his pieces in preparation. The fuselage was welded in his back yard under a tarp.

It's been said many times throughout history that "It's not the destination but rather the journey" and although many people say it, very few follow the advice. If a person can learn to enjoy the journey then working without a shop is simply not a problem. In fact, it would be even more fun given that the journey is that much harder. Perspective, lol.

You could buy 3 large rubbermaid tubs and store parts in. Just making parts is a fun journey in itself. In my opinion the fact you don't have a garage is really cool, imagine the satisfaction you'll have when you are done! Again, it's the journey that matters most.

For me at least, I'm focused on the rudder only. I'm not gonna even think about the rest of the airplane. Have a beer or two and just enjoy figuring the rudder out. Not a bad way to spend some time. What's really neat about Zenith, besides superior engineering, is the fact that it can be built both scratch method as well as purchasing parts. If time and finding space to fabricate gets tough (or a guy is feeling lazy) ordering parts is easy and the parts are pretty cheap. And the fact the airplane is aluminum lets a fella build outside.

The important thing here is that it's fun. The journey is everything. A modular table sounds pretty cool in itself!

Mike,
I can identify with you on the space issue. I don't have a space I can fully dedicate to my build. I have a 2 car garage but it is used to park cars in and I know my wife will not abandon it for the next few years. I am not going to ask her to because I park there too. Since I work 4 days a week I have Fridays where the garage can be emptied and I can set up my tools. This means that I have been making them portable so they will be easy to take out and put away. Your work bench design is simple and to the point. I would do something like that if I had a space that I could leave it in for an extended period. Since I don’t have the space I am designing a work bench that will be modular. It will be able to be configured to a size anywhere from 2’x4’ to 12’x4 in size depending on what is needed. That way the sections that are not needed will be able to be stored out of the way. Even so, when I get to the larger assemblies I will have to build them outside under my patio (which only provides partial covering). For the time that takes I will have to cover them with tarps to keep them dry. It isn’t perfect but I think it will work.
I look forward to watching your plane progress.
Earnie