Moving Day for the Zodiac Project

On Saturday, June 9th, several EAA Chapter 25 members gathered at my house to move the Zodiac project from it's humble birthplace in a Minnesota garage to a local airport.

The day began with one group meeting at the EAA chapter hanger for some early morning prep and cleanup operations, and another group meeting at my house to prepare the Zodiac for transport.  Several people displayed great stamina by participating in both operations during a hot, windy day and under a relentless sun. 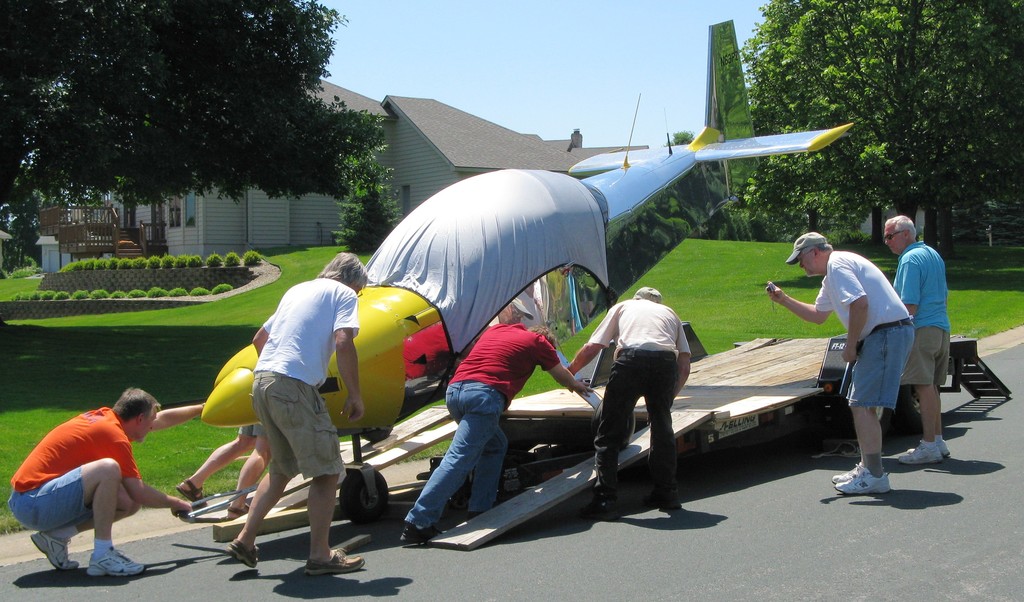 My friend Dick Navratil (of Rotec-powered Pietenpol fame) brought his flatbed trailer.  It took us some brainstorming to figure out how best to load the tricycle-geared Zodiac fuselage up and onto the trailer, but once we did we had enough muscle on hand to make the job go very well.  Once that was accomplished, we took a break to have lunch and to cool off in the air-conditioned house before setting out down the road. 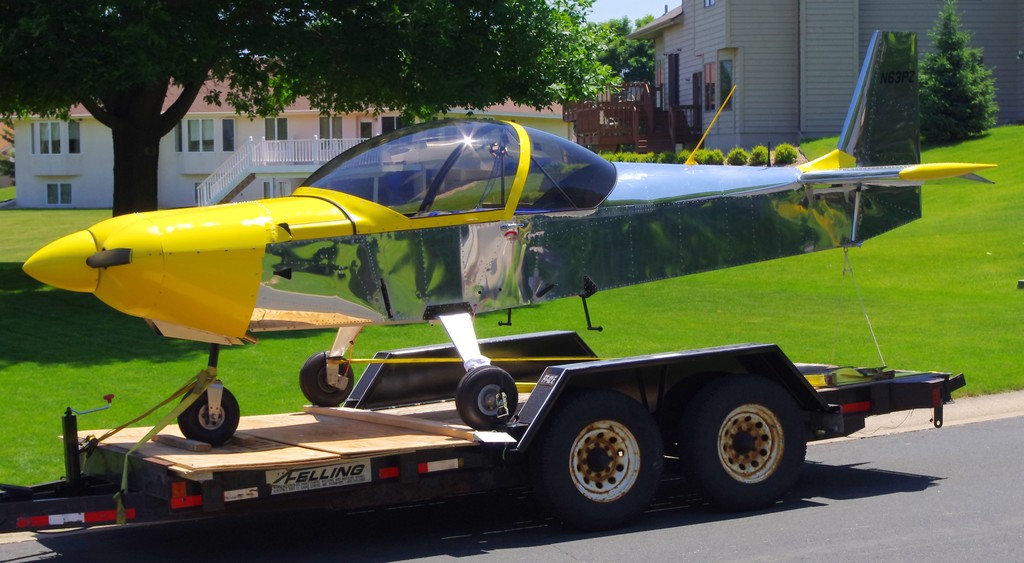 With the Zodiac fuselage secured to the trailer, our caravan began the trek towards the Lakeville airport.  Prior to departure, we'd arranged to stop after a couple miles just to re-check everything.  While stopping at a convenient parking lot (which turned out to be Eagan City Hall), I began to notice curious onlookers taking pictures.  One thought that crossed my mind was, "I hope nothing bad happens that gets us on the TV news...." 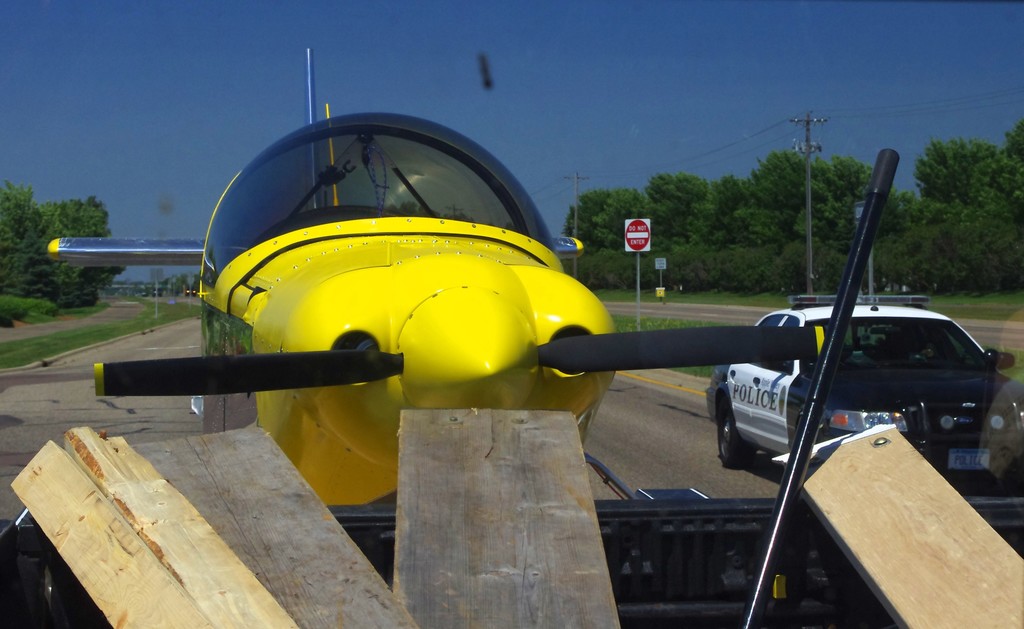 After verifying that everything was secure, we again pulled back out onto the road.  We inched up our speed as I watched for anything odd that might be flapping.  40 mph - everything's fine.  50 mph - looking good.  60 mph - still looking good.  And so we got the fuselage to the Lakeville Airport, and quickly unloaded it without incident.

We then returned to the house for a second trip to get the wings.  The wings were considerably lighter than the fuselage, but they were bulky and much harder to transport.  I'd already built a rack for them, and after another round of brainstorming we secured the wings to the rack, and then secured the rack to the trailer. 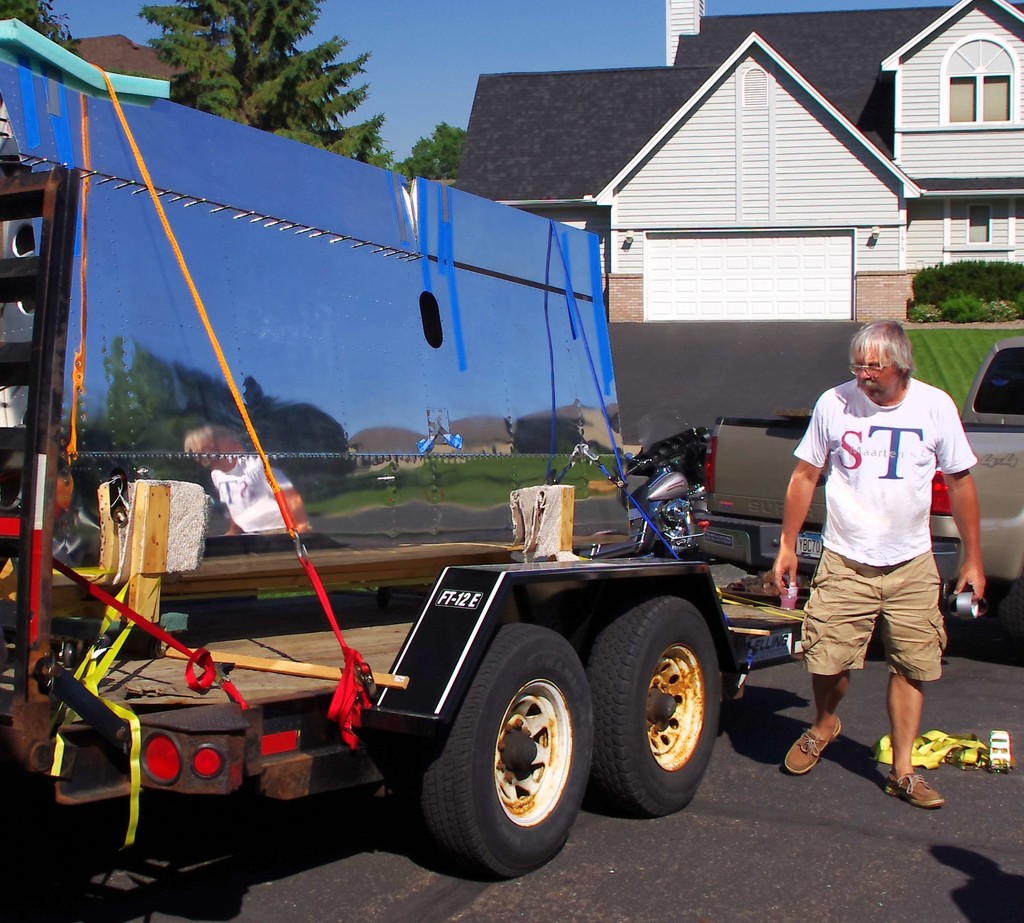 On down the road we went.  Much slower this time, and with two stops during the course of this trip.  We finally arrived at the Lakeville Airport, again without incident.  The winds were really beginning to pick up, and so we backed the trailer into the hanger and easily unloaded the wings there. 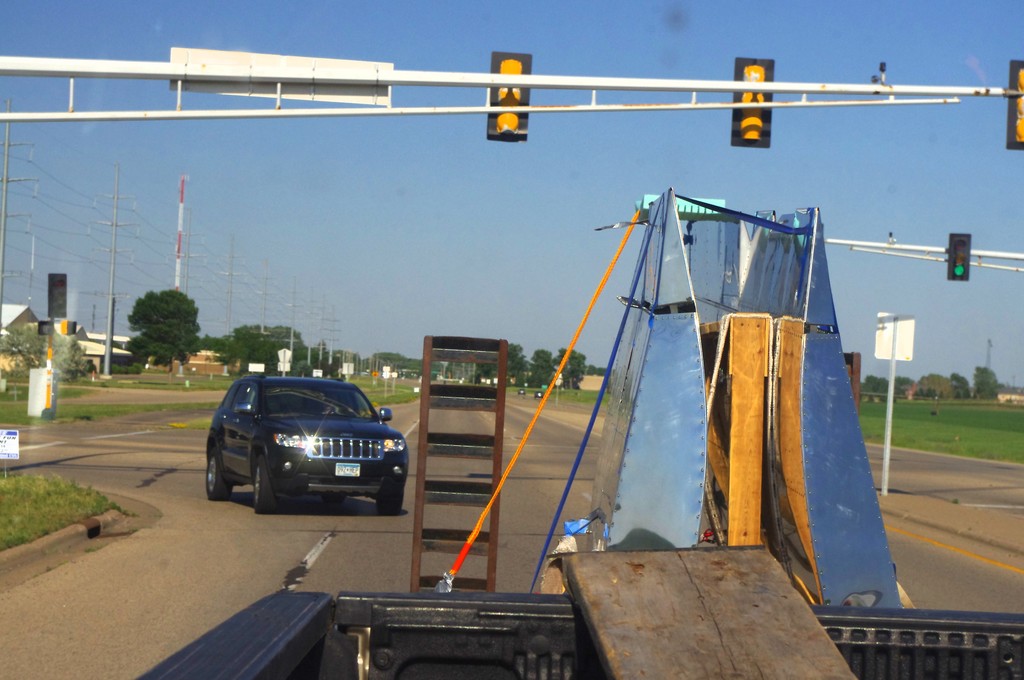 All in all, it took us quite a bit longer to accomplish the move than I thought it would.  As seems to be the case with many things,  more time is spent figuring out the "best way" to get a particular task done than is actually spent doing the task itself.  One of the great things about my local EAA chapter is that when you get a group of us together there is no shortage of smart people with great ideas on how to best accomplish something given the tools and materials on hand.

It was a hot day, and as I write this I am sunburned and some of my muscles are a little sore, but I had a wonderful time with some really great people, and I wouldn't trade that for anything.

Great news Pat.  I'm hoping to move mine to the airport within the next couple of months.  Hope my move goes as well as yours did!  Congratulations and happy flying!

Congratulations!  Moving is always the hardest part for me - it's usually just me and my 15 year old son.  Looks like you had a willing and capable crew!

Comment by Ron Lendon on June 17, 2012 at 6:26pm
Congratulations Patrick, that really is quite an accomplishment. After all the time we have put in on these things I'm still surprised at the look I get from people when I tell and show them the pictures and video. We are in the way less than one percent, and I can't stop smiling. See ya in the air some time this summer.

Congrats on the safe trip.  Moving to the airport was a big day in my adventure too.  The next big days is.....well you know what that one is.

Comment by Tim Juhl on June 15, 2012 at 9:12pm
Outstanding! The plane looks great. The effort it took to polish it sure paid off. Hopefully some day my 601 will make the trip to the airport as well.