Next picture after leveling off and reducing throttle, shows almost peak temperatures. Last picture, I was do some slow flying on the way back to the airport. 2,000 rpm, oil temp 163F (73C), pressure 51, hottest CHT 244F (118C). The picture also reveals the "Oil Cooler" cable below the fuel gauge, this controls a damper behind the oil cooler to restrict airflow to increase oil temps. It's in the full open position. Keep in mind, this is not the stock oil cooler installation. 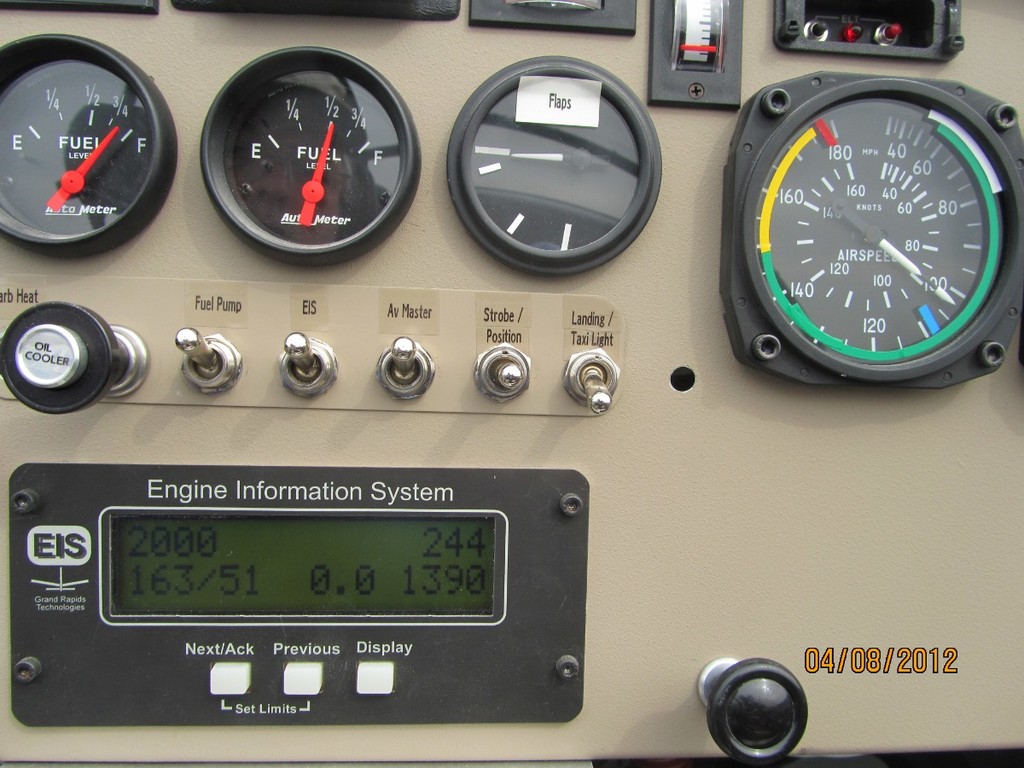 The flight test went extremely well. It was the first flight I had done without any concern for engine temps, even after running it hard. Jabiru engines are air and oil cooled. Cool oil will lower CHT's.

Next on the list, Version 3+ of the Engine Cooling Plenums (ECP), these replace the Ram air ducts. The current version is a mix of ideas that need to be merged and expanded. This next version, to be installed this week, is all metal and should provide even better engine cooling. Should have some new numbers this weekend.

Ian, I had bigger problems with oil and CHT temps, that has been resolved. The goal was to keep oil below 200F and CHT's in the low 300F range during a climb, that has been accomplished. Now I can deal with the EGT's, that is an easy fix, either installing a larger main jet in the Bing, or adding mixture control. I would rather have mixture control, no float and the minimum amount of moving parts. The journey continues.

Just my opinion. No need to replace the bing carb with a rotec TBI .

Have you got the econo jet kit fitted to your Bing carb?

I would be installing a larger main jet before next flight. are all your WOT EGT's that hot?

Dave, I'm running stock jets on the Bing Carb. Yes the the EGT's are hot at WOT, but I'll be running at a more reasonable rates of climb and cruise. My focus has been on lowering the oil and CHT's and that appears to be resolved.

My solution to lower the EGT's will be to install a Rotec TBI and gain mixture control. I have all the parts, just need to make time to install. It helps that the weather is warmer and I can spend more time at the hangar. I wanted to get some good Bing numbers before making the switch, to have before and after data, for those with inquiring minds :-)

I don't have a GRT EIS so I am not sure I am reading your display right, but is the lower right number EGT in degrees F?  If picture #2 is showing 1486F as an EGT in a max climb, is looks awful hot to me.  Were you planning on putting in a larger needle and/or main jet?  You may already know this, but if you do plan on changing jets, only play with one at a time.  I found that there was an inter-relationship in that both the main or needle jet would influence EGT's in what was supposedly the other's regime.  i.e the needle jet would influence WOT EGT as well as the main jet would influence cruise EGT's.

Richard, you haven't really missed any revealing posts, I've made mention of my custom FWF and there are pictures floating around on my pages. Here's a link to my moving day blog.

I have since reworked the bottom cowl to incorporate the oil cooler inlet, exhaust pipe cuffs, and added some depth to accommodate the much improved oil cooler assembly. All that's left of the stock FWF is the engine mount, battery mount, spinner and propeller. The new cowl uses 4" scat for the engine and oil inlets, no baffling, no leaks. The cowl exit extends past the firewall, the nosegear passes through a 2 3/8" hole in the bottom cowl. I've eliminated the lip and use the natural suction created to draw air through the cowl.

Basically, I've applied known solutions for efficient cowl design, and in an odd twist, it appears to work ;-) More information and pictures are forthcoming. All will be revealed on May 5th in Cloverdale.

Wondering have you had to change your nose bowl cooling inlets for the cylinders or did I miss a post?