Ignition module failure on my Rotax

Recently, the trusty 912S in my 701 has been, well, not that trusty. The symptoms started subtly about a year ago, with slight difficulty starting. Used to be, you couldn't count the blades before the thing sprang to life. Now I was counting 6 or 10 seconds, and having to mess with various combinations of throttle and choke - probably because the lack of immediate start was causing flooding.

Anyway, I had an annual inspection coming up, and even though I have my repairman certificate, I like to have a "real" A&P do the inspection every 2 or 3 years. So I describe the problem, and Shayne helpfully checks the carb floats and the jets - and there was indeed some dirt stuck in one of the starting jets.

The problem seemed to get a bit better, but within a few flights it's apparent there's still something wrong. It's now taking several cranks to start (from cold - seems OK from hot).

By now I'm getting nervous about flying, even though it's never given the slightest hiccup once running. So I decide to take it over to Sebring for a full diagnosis. But - you guessed it - the day I decide to take it, it won't start!

Shayne does some remote troubleshooting and wonders if perhaps the ignition modules have failed. He explains that they often fail progressively, so that the RPM at which the engine will start slowly increases, until the starter motor simply can't crank the engine fast enough.

He asks me to check the ignition by hooking up an induction timer. I don't have one, but Amazon does; 2 days and $30 later, so do I.

I hook it up, tie the aircraft down, and crank away. No flashing light - nothing. I think - Shayne was right, it was the ignition modules!

But new ones aren't cheap - about $2k for a pair - and I want to be sure before I order them. So I decide to check the induction timer on another engine. After all, I've never actually seen this thing work. So I pop the hood on my Jeep Wrangler, and do you think I could find the HT leads? Nope. On older vehicles I could identify every component under the hood. These days, not so much. I remove the "JEEP" branded plastic sitting on top of the V6, thinking surely the HT leads would be visible after that. But nothing looks remotely like a spark plug or an HT lead!

Getting a bit frustrated, I look across the garage at my wife's Tesla Model S. No help there! How about a mower, I hear you ask. Nope. Our old mower died a year ago, and we went electric there too - a Ryobi 38" ride-on gadget which is by far the best mower we've ever had. No gas, no oil, no belts, no hydraulics - just a motor for drive and two more on the deck powering the blades - and so QUIET! But I digress...

I recall we do still have another gas engine - a little 5kW generator. We live in Florida, after all. I start the bugger, and clip on the induction timer. Nothing. No flashing lights. And I know there's a spark - the engine's running!

So back it goes to Amazon and this time, instead of ordering something for $30 from a manufacturer I cannot pronounce, I order a Bosch for $60. Last I checked, those chaps know a thing or two about electrical stuff. It arrives, and first thing of course is to test it on the generator. There it is! A nice steady flash-flash-flash. Back to the Rotax, clip it on, crank away, and nothing. So, they had failed. Looks like I will have to shell out the $2k.

Quickly checking in with Shayne, he says "not so fast" on ordering the official Rotax parts. He points me to a Czech outfit (https://www.ignitech.cz/en/vyrobky/bikes/rotax/rotax%20912%20and%20...) who do a replacement for the OEM units (which I believe is a Ducati unit anyway). Here's the good news - the replacement units are about $300 for the pair. That's a lot better than $2k.

I order a pair, with the optional longer harness so I can mount the new units on the firewall, away from the heat and vibration the original units must have suffered mounted right on top of the engine. 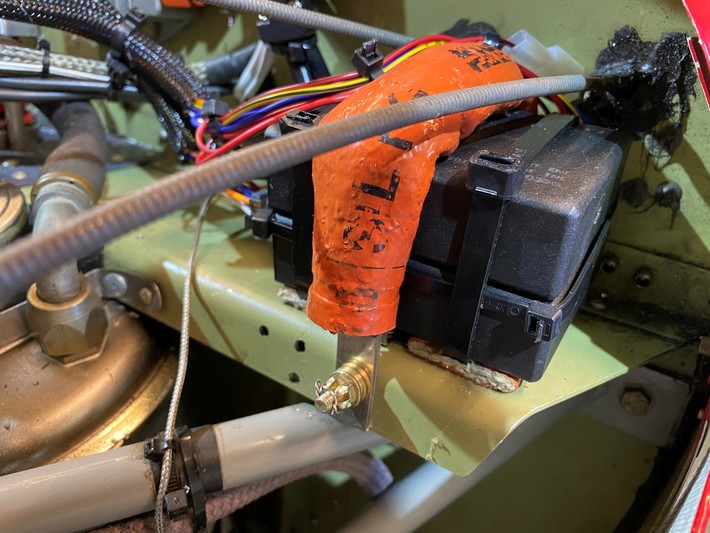 The extended harness plugs right in to where the old units did: Holding my breath, I crank the engine, and - we have ignition. The engine literally bursts into life within a microsecond of cranking the starter. Naturally, I do plenty of ground tests before returning to service and going flying, but no problems so far. I will certainly let everyone know if the engine misses a beat...

Good chance if they are that old they are not Soft Start? You can probably check by the number on the Modules?

That's a good question, and I honestly don't know if the originals were soft start. They certainly were Ducati units as you point out. And yes, I think mounting them remotely on the firewall makes total sense. The old units lasted for about 12 years, so let's see how these new units do.

Sorry for the confusion, but were you original modules soft Start ? I like the idea that they give longer leads to move them so that heat and vibration does not affect them. The price is what they should be not what rotax is charging now. Back a few years ago when Bully came out with after market Soft Start Modules for Rotax , Rotax offered an up grade kit for 2 New modules with soft start for about $600. This would be acceptable,but the new pricing for a pair of modules is ridiculous from Rotax. I believe that Ducati does make them for Rotax or they used too as I have original ones with Ducati name on them. The Aftermarket Company has an interesting Web site and seem that they very knowledgeable about all the types of Rotax Modules. Good Warranty and repair services? Not offered by Rotax?

According to their site, yes, they are set to "soft start".

One other thing, they recommend connecting 12 V from the starting button (i.e. from the starting solenoid). It will power the units with 12 V when starting. It can apparently improve "startability". Now, I have not made use of that extra connector yet - I am just using the standard plugs per the original installation, meaning the units are being powered not directly from the battery but from the magneto-generator.

But even without that extra connection, the starting performance is excellent. I will make another post if this changes!

Just curious to know where they Soft start modules? You can send them (modules) into authorized Rotax Dealer and have them tested if you want to know? They will give you a report usually don't charge much? Just shipping costs.I've seen the add for that after market company , they seem to know there stuff and reasonably priced. Would be really interested how they work and perform for you? Please keep me posted. Tks Wayne

Thank you for sharing your problem and solution with us.  Hopefully you will have no more ignition issues.

this is the second time I hear about Rotax wanting a fortune for these units.  Hal from Elko Nevada recommended these units to my friend. He assured us they were good. Glad to hear you did your homework.

Great explanation of your issue, and the steps taken to identify and repair the ignition. The curious nature in me would like to know how many hours the engines had on it at the time of failure? Thanks for sharing.