On July 3, 2020, I my 3100cc engine started running rough on short approach to KTTA, after a 25 minute flight from KJNX, and resulted in me having to dead stick her in against traffic.  The resulting teardown exposed a broken pushrod, and possibly a worn out rocker arm.  The resulting discussion led to a lot of education on valve train geometry.

And, he was kind enough to make some pictures of the pushrods at: http://www.n56ml.com/corvair/pushrods/

One of the first things to keep in mind is that Corvairs have hydraulic lifters, and that changes everything.

First, the lifters can and do, effectively change the length of the pushrod.  If a pushrod were slightly too short, the hydraulic lifter could make up the difference by pumping its plunger out further.  If the rod were to be too long, the lifter could adsorb the excess by draining a bit of oil.  But, the range is only about 0.040".  It's not a good idea to depend on this as you're choosing a pushrod length, but. . . if you have no other choice. . .

Second, the "preload" that is recommended, whether it be 1/2, 3/4 or 1.5 turns is always designed to compress the lifter somewhere between 0.020" and 0.060".  Any less, and the expansion of the engine when hot might move the the cam far enough away from the rocker arm to leave a gap.  You've exceeded the range of the lifter.  Any more, and you have the possibility of the rod being too long and never letting the valve close completely.  You've completely compressed the lifter, and effectively made it a solid block.

Following the method outline by Miller, and using Mark Langsford's method as confirmation, I constructed the following drawing.  There is a link to this drawing below in vector format, in case anyone wants to make their own. 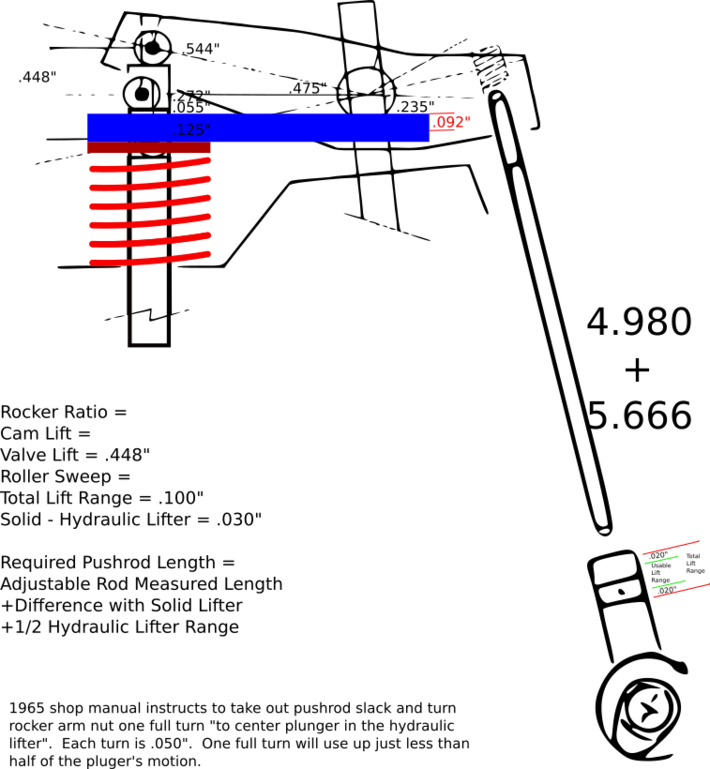 What we have here is a drawing of the valve train with the measured dimensions.

Following Mark's instructions, I constructed my own adjustable pushrod.  I didn't use a joiner that was long enough at first, and had to both put more threads in the rod halves, and thread a long AN bolt.  Then, I created a "solid" lifter by driving a nail through the oil holes of a spare, and then sheared the nail off flush with a chisel.  I tried drilling the lifter for a rivet, but those things are HARD. Then I put half of my adjustable rod in the drill press, and used it to measure the height of the solid lifter.  I then measure several of the lifters in the engine.  The solid lifter was .030" taller.  It's important to use a rod to do this measurement, since the point of interest is where the rod sits in the valve's cup.

I turned then end of an AN-6 bolt down and threaded it to 1/4-20, and used it as a post in the valve cover bolt holes for my dial indicator. Set the indicator on the spring retainers, as close to parallel to the valve stem as I could get it. With the solid lifter, I assemble the valve train and tightened the rocker arm until the dial needle just barely moved.  Then I turned the engine through to have the cam actuate the valve at least once and then adjusted the rocker arm again til it just barely moved.  In this way, with the dial indicator locked in place, I'm able to turn the engine crank to find the total valve lift (.448").  Then I position the crank such that the valve is exactly half way open.  .224" in this case.

Just as in the drawing, my first reading had the bottom of the trunnion BELOW the bar.  It was a multi step process to lengthen the pushrod, then get everything set back for a new measurement.  First, I had to relieve the pressure to loosen the rocker arm, as I couldn't turn the pushrod halves with it under pressure.  Maybe I should grind a flats on both halves?  Once I had adjusted the rod, I had to go through the whole assembly process again.

The next issue I'm running into, is that the rocker arm nut now only has about 6 turns on the rocker stud.  This doesn't feel right to me.  I'm investigating where I might have gone wrong. There are two interesting things to note about the photo above.  First is how I arranged the dial indicator to show the valve lift and where I'm at in relation to min/mid/max lift.  The second is how the valve stem is not intersecting the center of the roller.  This is the problematic valve that resulted in the broken pushrod.  Testing with a post-it note between the roller and stem tip, indicates that the roller is riding on the lower corner of the tip.  Small wonder that the stamped steel rocker arm would slide off, putting a sideways force on the rod, and wearing a slot in the rocker stud.