Christopher attended our regular Zenith Workshop earlier in the year, built a rudder and then decided to continue to build a Zenith CH 750 Cruzer kit. That is not an infrequent occurrence - that's how many builders get started. However, Ward did manage to talk the factory into hosting a workshop that would focus on the horizontal tail sections of his kit, and he brought some members of EAA Chapter 429 to help with the assembly of his elevator and stabilizer.

Over the two days, the builders, some experienced, some pulling rivets for the first time, were able to complete the assembly of the horizontal tail sections, all while learning and having fun working together. Following are photos of the progress.  Scroll to the bottom of the page for videos. Clecoing the stabilizer parts (rear spar) together. Since the parts are essentially final hole-size match drilled the assembly comes together quickly and is soon ready for riveting.

Before lunch on the first day:

Riveting the stabilizer assembly with the skins: Clecoing the elevator parts together. Again, since the parts are supplied final hole-size match-drilled in the kit, the assembly comes together quickly and is soon ready for riveting. 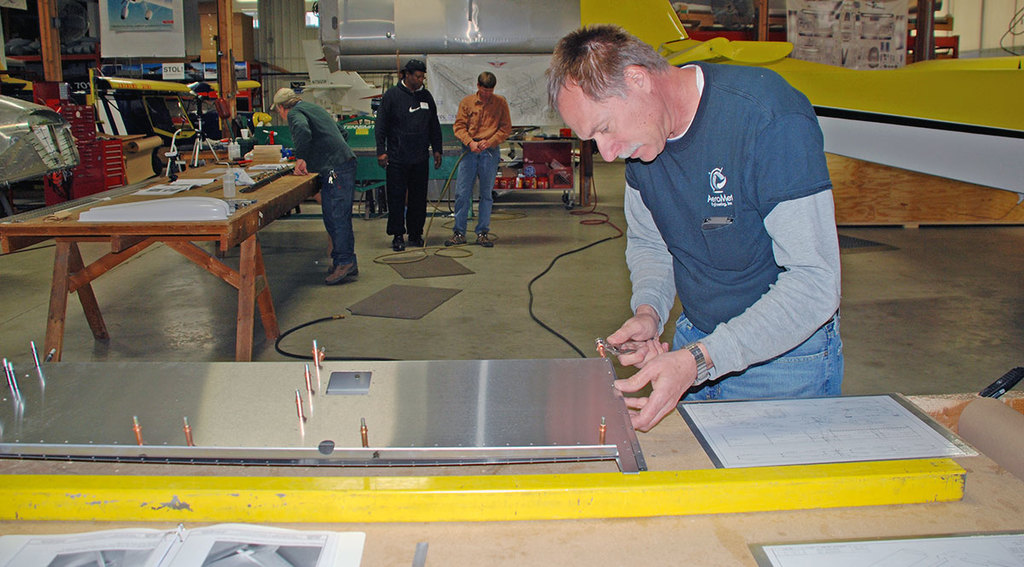 Below, installing the elevator trim tab (electric) in the assembly: 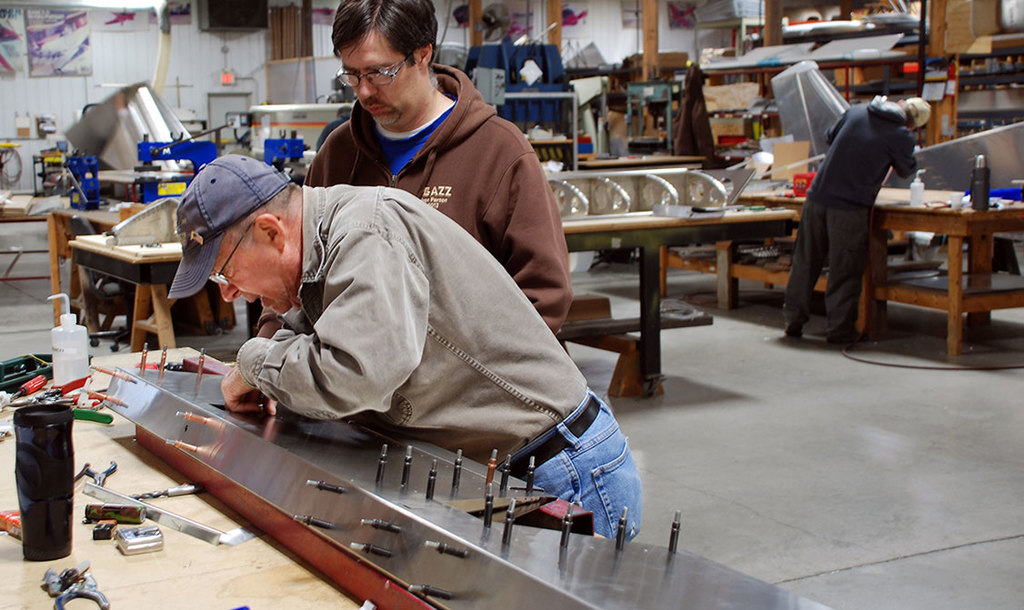 Riveting the elevator assembly together: 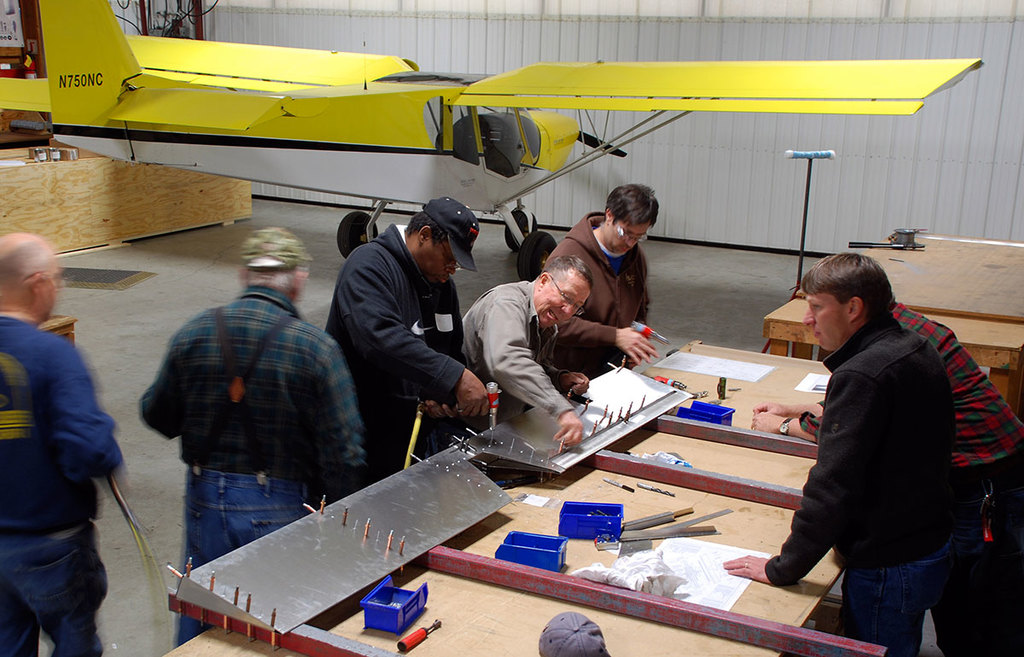 Joining the elevator to the stabilizer with a piano hinge:

Working on the final assembly of the horizontal tail sections 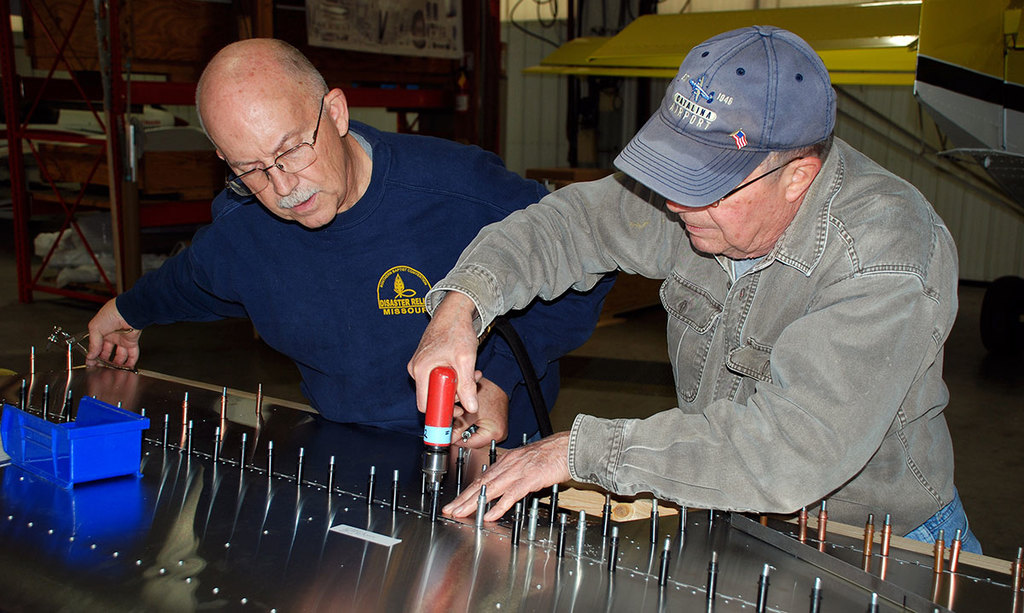 As a result of the successful experience at the factory, we have decided to expand the experience to make it available to more builders. Starting at the next two-day factory workshop (on February 5th and 6th, 2015), building a horizontal tail kit will be added to the workshop schedule. The plan is to continue the introductory rudder-building workshops and occasionally hold an elevator/stabilizer workshop for those who want to work with something a little larger and slightly more complicated.  Please let us know your interest in this!

Toward the end of the second day I had a chance to ask Christopher about his project. Here's what he had to say:

Great idea!  Sort of a quasi factory builder assistance.  Too late for me, but I would have gladly stayed a few extra days and built a 750 STOL elevator while at the rudder workshop.  Or, come out for a elevator workshop versus a rudder workshop.  Exposure to various aspects of the building process on the elevator with experienced factory guys would have really boosted my skill/confidence level as a first time builder.  Overall, so far, the build has been a blast no matter how I look at it!!