Another failed nose-gear bungee on my 701

Funny thing – the original bungee on my 701 lasted for years. But with about 5 years and 200 hours on the aircraft, I was persuaded to replace it. So, I ordered one from Zenith, also the bungee replacement tool which helped - only to find the bungee was too big for my plane. It was really loose and with the gear off the ground, I could push the bungee off the pegs on the nose gear leg.

A quick call to Zenith, and Roger kindly digs up a smaller one and sends it to me. It fits nicely, thank you! But, the bugger failed only a year later! Nasty sensation – felt like the prop was going to hit the ground. So I order a new one, and replace it (getting pretty good at this…)

Another year or so goes by, and I’m out in my 701. I land out somewhere in the middle of nowhere (which is kind of the point of having a 701). Taking off, during the 701's trademark ridiculously short ground run, the nose feels a little lower than it should be. But then I’m airborne, so all seems well – for a couple of seconds. Then it feels like it did last time I was flying a twin and the instructor pulled one of the throttles to idle – the plane just starts yawing hard to the right. Full pressure on the left rudder pedal has no effect. An old joke goes through my head – something about being up here for ever if all I can do is go in circles. The plane does seem flyable though, which is obviously a relief – flyable if I don’t try and make a left turn, that is. It’s going to be right traffic today, I think!

Then, as soon as it appeared, the problem seems to go away – only to be followed by the strong smell of burning rubber. By this time I’m less than five minutes from South Lakeland Airport, but I descend to tree-top height and keep over open pasture as much as possible, in case it becomes prudent to abandon ship. I also turn off the fuel pump and have my hand on the ignition switch, ready to transform myself into a glider if I see any sign of fire.

Turns out I don’t need my glider experience with the RAF all those years ago. I land and remove the cowl, and here’s what falls out: This explains the stuck rudder as well as the burning smell. When the bungee failed on the left, the remaining part of the bungee tried to twist the nose gear to the right, and then fell and jammed between the gear leg and the firewall. Eventually, it must have fallen out - at which point the rudder freed up – and of course it fell onto the exhaust and started to cook.

You can imagine at this point I don’t even want to see another bungee. I recall something in a Zenith newsletter about a new bungee-less system, so I place a quick call to Zenith. Seb tells me that they have a kit for the 750, but not yet for the 701. But he helpfully suggests chatting to Viking Engines (who do the very attractively priced Honda engine conversions) - they apparently have a “steel bungee” kit. A quick call to Jan at Viking and a review of their site, and I place an order for one.

Meantime, on removing the nose gear in preparation, we notice a crack in the flange that holds the top end of the nose-gear in position: 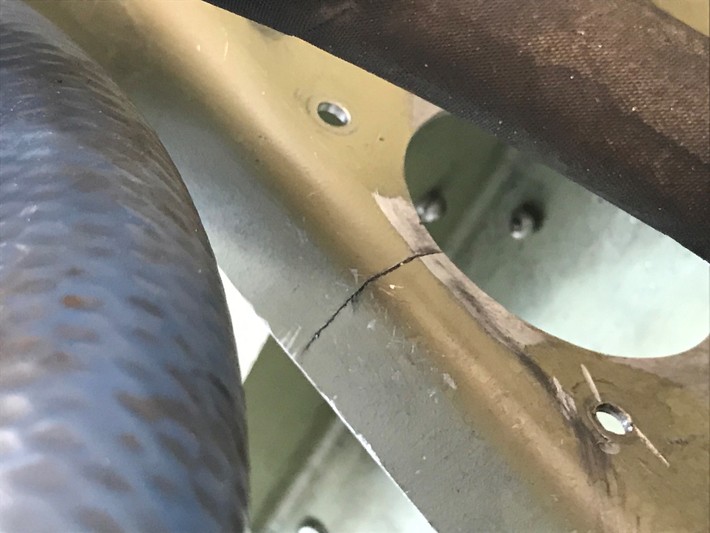 Luckily, I have with me A&P extraordinaire Ray Torres, who rapidly fabricates some doublers and installs them. His Lake Renegade, which he restored from a basket case, won trophies at Sun n Fun – so you know he’s good at this kind of thing.

A few days later, we install the steel bungee kit, and it works really well. At first try, as shown, the gear only had about 1.5" of travel. Another quick call to Viking and Alyssa tells me Jan suggests adding a spacer. They are getting ready for Sun n Fun so she offers to bring it over - that's service! We added the spacer today, and now have nearly 3" of travel. The kit features a neat pre-load feature so that, when the aircraft is in the air and the gear is resting on its bottom stop, the tension in the spring is removed. Think of it as being able to adjust how far off the bottom stop the gear has to travel before the spring engages.

Anyway, this has the effect of DRAMATICALLY lightening the rudder in flight because the spring is not pushing the gear leg down onto the bottom stops the entire time. The old joke among 701 pilots is that the rudder is "set it and forget it" - the bungee makes it so stiff. But not anymore! The rudder is now as light and responsive as the other controls. Great improvement!

My advice to anyone about to replace the bungee - order one of these kits. You won't regret it.

After changing my bungee the first time, I swore it was my last.

Went with the Viking and its been absolutely perfect in performance and reliability.

Excellent write up and product review.

Thanks for sharing. I just started my 701 build so this is very timely for me. I will put it on my improvement list.

Comment by Fred Westbrook on April 29, 2019 at 7:16pm
The steel Viking suspension,is the only way to go. Real suspension , and trouble free.