So it has started, day two of my massive river trip. I am looking at

the Grand Tetons out my motel window here in Driggs Idaho getting ready for the first day of the Missouri River.

Yesterday I left Santa Rosa California and flew here more or less in a straight line, having seen that country go by before. Today should be more interesting.…

I finally got the opportunity to do an adventure I had often thought of; a flight past the many volcanic mountain peaks 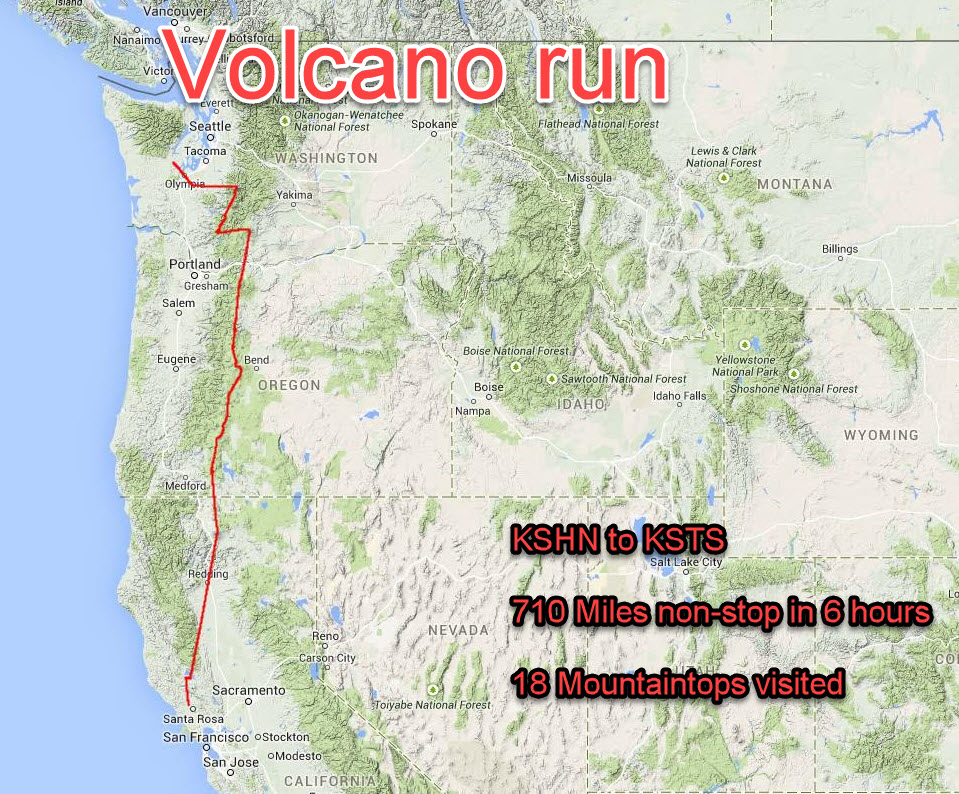 on the west coast.

I had flown to Washington to visit my brother, who also owns a 601XLB. After a week in the rainy northwest it was time to return home to Santa Rosa, CA. When planning the flight home, I noticed the weather would be…

6,600 mile trip to Central America proves to be big adventure

"That which does not kill us makes us stronger." - Friedrich Nietzsche

Since I started flying my 601 back in 2007 I have found it to be a fantastic machine for exploring and adventure. I have enjoyed expanding my view of the world by flying over the country side, looking out at the great sights below and taking pictures from time to time; actually thousands of them.

In the past few years I have had in mind to fly all the way to the tip of South America. I… I usually try to work some sightseeing into my trips. I love to fly in…

With two more big trips accomplished this year I compiled some simple statistics for my flights in my 601XLB.  Some numbers are approximate.

Its been a great…

Bob and Steve's Adventure to Canada and Alaska - August 2015

For many years I wanted to fly my 601XLB to Alaska but I only had a light-sport pilot's license. After endless waiting and hoping for a rule change in Canada, I finally ran out of patience.  This last spring I "went back to school" and got my full pilot's license.  Shortly thereafter I started planning my biggest airplane adventure yet, a flight to Alaska.

Upon studying maps and doing a bit of measuring, it soon became…

The other day I decided go through my collection of over 20,000 airplane-related pictures and selected some of my favorites to put on one of my digital picture frames. I chose about 900 pictures for the picture frame than, having gone to all that effort, wondered what else to do with the collection. I decided to upload them to my Microsoft OneDrive for the enjoyment of my extended family, flying partners and anyone else with a…

On May 3rd, Doug and Lorri Dugger held the Quality Sport Planes spring open house.  As usual, it was a good time for all and well attended.

Roger came out from the Zenith factory and he and Doug gave numerous demo rides in 601, 701 and 750 aircraft. In October of 2012 my friend Bob and I flew our airplanes through 7 western states.  During our 12 day adventure we covered a total of 4,053 statute miles.  Along the way we flew through high mountains, valleys and canyons.  This was low-slow flying at its best. Often we were below 500 feet AGL.  The average AGL for the entire trip was only 1,003… Playing with the wind: The big circle

It is said that when making a round trip any wind is a disadvantage.  While you may have a tail wind in one direction, you will have a headwind in the other.  You will spend more time in the headwind then in the tailwind so overall, the wind will increase your trip time and increase your fuel burn.  I have found sometimes this is true, other times it is not.


Today’s pilot has powerful weather tools to help fly safely and sometimes more efficiently.  Now if your only going up…

Two upgrades in 13 days at QSP

Would you pay this man to help you upgrade your airplane? We did and it worked out much better then the picture would suggest. This blog is not a how-to. There have been plenty of well done how-to blogs. It’s just some pictures with a few words attached.

Last Saturday morning about 11am my trusty Zodiac XL carried me away from my home base at Santa Rosa California (STS) looking for adventure. After stopping in Cloverdale (O60) for a load for fuel it took me out to the coast hoping for cooler air. She headed north along the Pacific Ocean past Shelter… Continue A quick trip to Washington and back (Another 1,330 miles for the log book)

On Friday I flew 664 statute miles from Santa Rosa, CA to Shelton, WA to visit my brother Alan and his wife Nathalie who have a Zodiac XL which is a twin of mine. The flight north was one of the more challenging I have experienced. In Northern California I got to choose… Continue

What is your experience using automotive gas in airplanes?

I fly a 601XL with a Jabiru 3300 engine. The other day I ran into an old-time pilot who has been using automotive gas in his airplane for many years. He reports no problems, in fact he had only good things to say – like longer engine life since he switched. Jabiru does permit the use of premium auto gas in the 3300. I am contemplating the switch for the following reasons:

1) Longer sparkplug life. I have gotten 170 hours out of my last two sets of spark plugs which is hours 70 more… Continue