Finished up outboard flaperons today, gonna do the inboards after the fuse. I'm finished with wings, elev. & stab., rudder, & slats. Gonna have a big shop cleaning tomorrow, then dig all the rear fuse parts an skins out of the big box and finally get started on the fuse. Happy Day!

Does anyone have a reference for a video of a CH 701 taking off with very strong headwind and zero ground run?

I bought Jon Croke's excellent DVD on scratch building, which gave me heaps of ideas and methods that I probably wouldn't have thought of myself.
Made a bending brake just out of a hinged piece of Tas Oak on the side of the workbench (with another piece on the top which has an aluminium strip screwed to the edge with a 3mm routed edge for bending). At the moment I just screw this to the workbench when bending something, but have just bought a very stiff length of square section extrusion… Continue

This would be an ideal time of year to hear from the Zenith forums & bloggers about their tried and true ways to preheat their aircraft. Please posts your ideas and share how you get her warmed up for Winter flight.

On my 500 hour 601XL-B, I use an electric automotive oil pan heat pad (45 mins.) and I also use the electric small milkhouse heater (45 mins.) (the one posted on the Jabiru site). I put a flexible metal tube on the heater and…

I have finished the rudder and the firewall. Rudder took some time, allot of hole to drill, enlarge, debur, cleco, and then rivet.Feels good to have a few assemblies done. On to the next one, I think it is going to be the Elevator.

If you are a Zenith builder and not a subscriber, send me an email (jon@zenair.org) and I can send you a back issue sample of the newsletter and DVD. To renew, or subscribe, click here.… 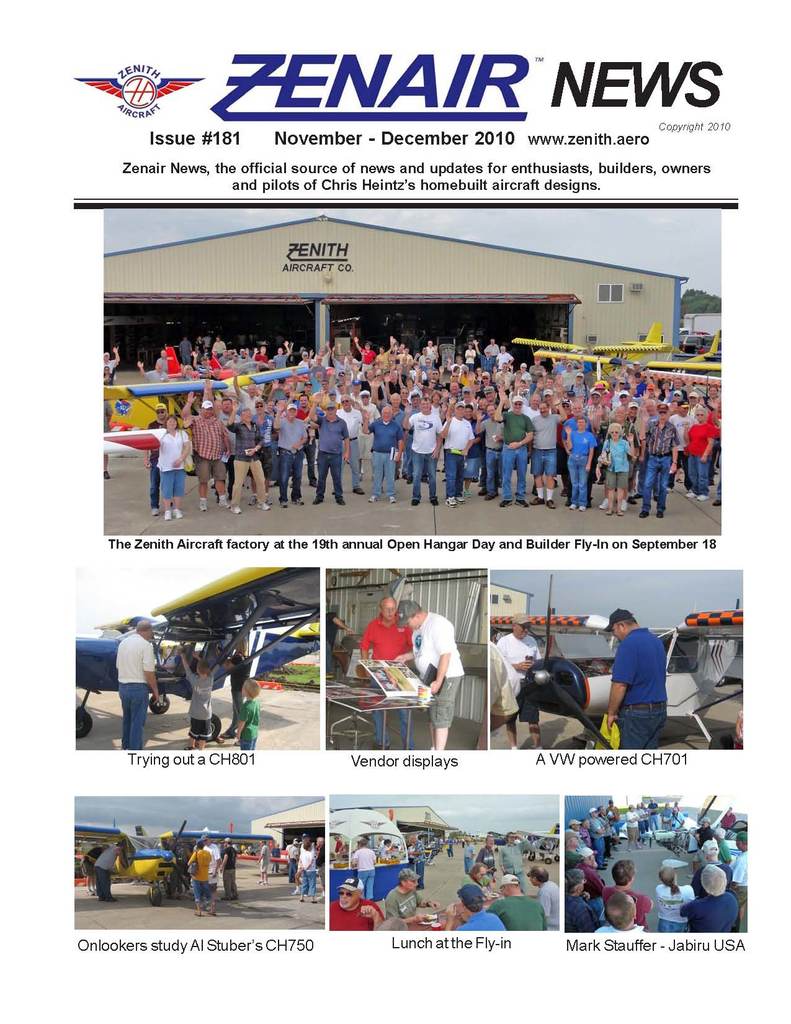 Kitplanes magazine editor is also a builder and a pilot...

I have installed a 2000 Suzuki 1.3 fuel injected engine in my CH701 on amphibious floats. For initial ground running I have connected it to the radiator that was used for a Rotax 618. I'm not thinking this will be the cooling system I will fly with and am looking for information on radiator and cooling system installation from anybody who has installed this engine in a 701 and had thought they had a good cooling system.

We live, work and operate in…
Continue

Building and flying adventures from around the world...

The internet never ceases to amaze me in how it allows us to better communicate and share information. Aside from the obvious convenience (of e-mail and websites), it's a great tool to share photos and video clips. Fast internet (something we still cannot obtain at our factory in Mexico, Missouri) and services such as YouTube makes sharing high quality video clips easy for novices. Of course, there's a whole lot of garbage out there (the vast majority is) but there is still some great content… Continue

I have a temporary server for my site. http://blueskyexp.hobby-site.org Server is up & down depending on whether I want to leave it on or not. If you want me to turn it on for a while, let me know.
It hasn't been updated in a few years. It will be as time allows. Note. I used an O-360, not the Subaru EG33, so the EG33 is for sale.Still on the engine stand. The pic of the entire right side of the airplane shows the top cowl loose, (it does… Continue

I recently came across an email titled "Zenith STOL CH 701, Made in China, $68.00" only to discover it was for a wooden hand made desk top model of the airplane... and not a full-size version like the one pictured below (also a STOL CH 701, made in China):

Instructions to fly my 701

I think the most difficult part about building my 701 is to find somebody to give me some instructions on how to fly it.I read a lot about it on the Internet but I need practical experience.Can anybody help?