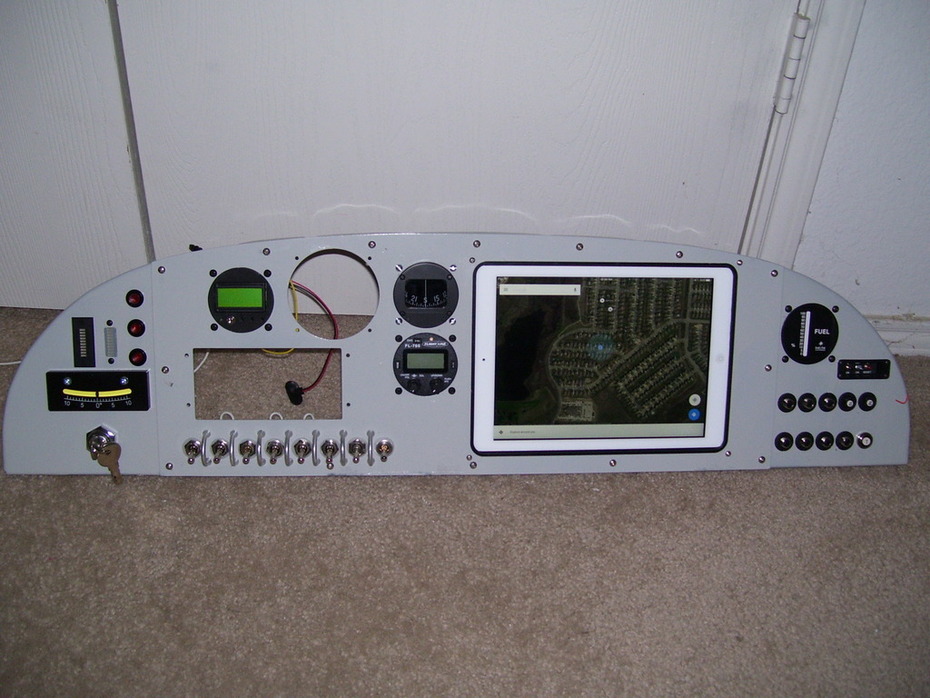 I was space constrained for the inclinometer.  It is a B-10 from Level Developments in England.

I have the Ray Allen Elevator Trim indicator and next to it is a Barker Aviation kit-built AOA indicator (the vane is on the port wing at the jury strut ... or will be when I finish the fuselage and mount the wing).

The three LED's are indicators.  I'm using a Firgelli Automation linear actuator for the flaps and the Viking 110 HP engine (hence the square cutout for the Viking View EIS which will be delivered with my firewall forward at the end of the month).

I have a single Belite fuel gage and a Belite fuel level probe in the header tank behind the baggage compartment wall.  This may or may not work because of the high pressure return line to the tank required by the Viking.  Nobody out there, Belite & Jan at Viking included, has been able to tell Robert Eli (another brave soul trying the probe) and I if it will work.  I have the header tank vented to the wing tanks and am keeping my fingers crossed.   If it fails, the probe and single gage will go on sale and I'll replace the gage with a single Belite dual tanks gage that uses the std VDO sensors I put in the wing tanks.  I hope I don't have to do that as I'll have no reading on what's in the header tank.

That's an iPad Air using the FlyPadMount (www.flypadmount.com ... pricy, but a beautiful fit and the iPad is easily removable).  The mount provides routing for the iPad connectors on which I have a Bad Elf GPS and am installing a 12V car cigarette lighter plug behind the panel for the charger.

The rectangle above the breakers is the AmeriKing ELT Remote Panel.  The odd breaker is the 1Amp breaker for the FL-760 radio.  Carling does not make a CLB series 1 Amp breaker.

I'm getting ready to install the "Hartsell Slide Stick" dual controls mod that you may have seen on this site, so since the center panel is removable, my A800 throttle will mount in the center under the panel.

I also have a small plastic electronics kit box containing a strobe/wig-wag lights controller (www.CrazedPilot.com) that I'll mount under the panel on the passenger side.

To finish it out, I'll be adding dual mic/headphone jacks (probably on the seat-back, between the pilot/passenger for the FL-760's intercom system.

Mike Gleason at Stein Air helped with most of the design and did the CNC work.  We had some problems with the 1st pass so I have a blank panel which could possibly be modified.  If you're interested, let me know.

Missing is the 3.125" altimeter (Aircraft Spruce back-ordered since June).

Comment by Michael Chesney on October 14, 2015 at 8:05pm
I like it. Very close to what I have in mind. Is that a really big slip indicator on the left? Also, it looks like the led gauge for trim is above it but no switch...you using a yoke switch? What's the items along side it? Very nice design!