As a member of that elite fraternity that paints the belly of their plane white, it really bugs me when water or mud gets thrown up on that belly!  After all, white belly airplane owners work very hard to develop the correct "patina" of evenly distributed dust, dirt, and exhaust stains ... and if carefully done and evenly distributed, you can "almost" convince someone that it is not dirty, but rather it is "off-white!"

HOWEVER, when that darned naked nose wheel treks across wet grass - it sprays the belly with droplets that absolutely ruins the "patina" with big ugly streaks and splotches!  And we won't even mention what happens if you hit mud, or worse yet, a cow pile!

So, I recently noted on John Heather's first engine start video that he had a mud flap on his nose wheel and shamelessly copied it, with modifications: 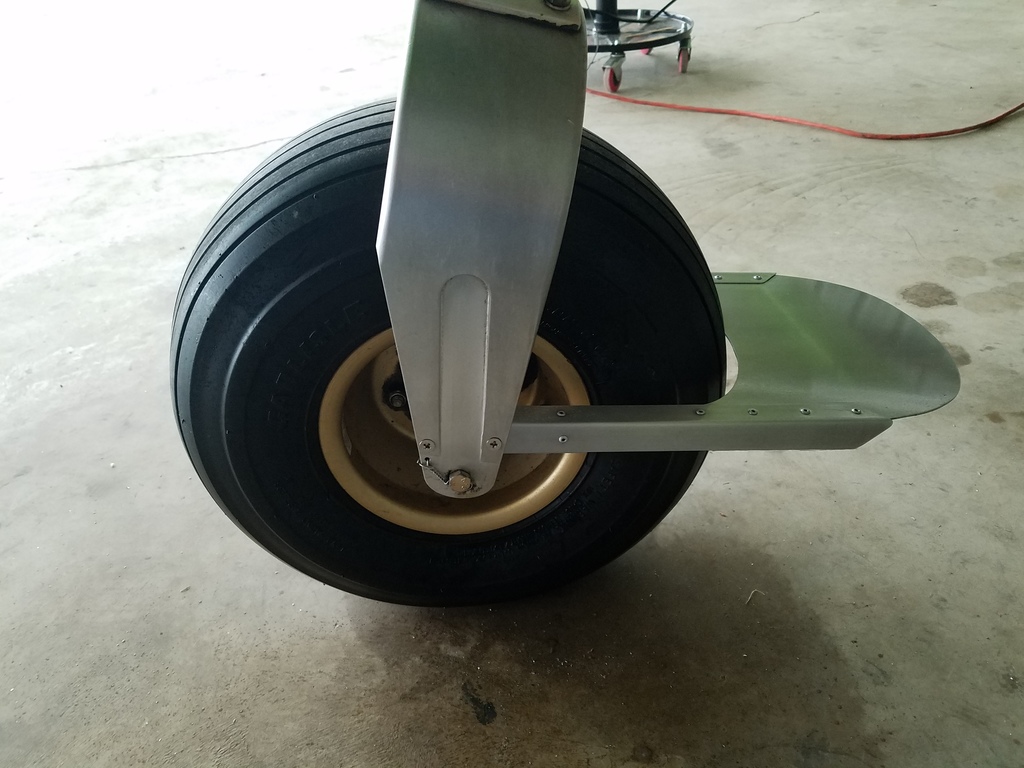 Since I had down-sized my tires to 600x6x15's, I had plenty of room between the tire and the fork to mount the L's on the inside of the forks.  I used .040 fabricated L's with doubler L's under the front 4" of the L. The flap is .063.  On John Heather's flap, the L's are mounted "upside down" relative to mine, but give him a break ... he is in Australia (aka Down Under)!  ;>)  OK, the truth is he had to mount his on the outside of his Cruzer's forks for clearance purposes and therefore the L's have to be "upside down" to have a flange facing the exterior of the fork.

The entire assembly was brushed and clear-coated with ProtectaClear metal coating.  I like this coating for small jobs as you can brush it with a foam brush but it is self-leveling so you get a nice finish and, it seems more durable than rattle-can clear coat.  I used it on the fork and landing gear legs and it has held up well as you can see on that fork after 5+ years and 500+ hours!

The flap is slightly angled downward so that it will be parallel to the slip stream in normal flight attitude.  I doubt it will cause much drag as it rides in the area shielded by the tire.  We've had near-daily rains lately, but of course, as soon as I finished this it quit raining! So, a follow-up will be in order when wet weather returns.  I've no doubt it will work well as many planes have similar flaps.

That looks nice, John, as well as being a practical solution to a very real problem.

No, the main gear doesn't seem to throw much up either on the wings or the tail.  Maybe the slow speeds involved with take-off and landing don't kick up the spray high enough to be significant, but the nose wheel is a lot closer to the belly!  My strip has excellent turf and doesn't get muddy, and I don't do off-field operations, so the primary nuisance is just plain old water (rain or dew) streaking-up the, ahem, "patina" on the belly!  ;>)

Look at the underside of your main wing brace STRUTS...

Funny, I routinely wipe them down (they're painted WHITE!) and they don't seem to get particularly dirty!  Like I said, I'm dealing mostly with relatively clean water (rain and dew on grass), not mud, and since the struts are clean, a little water doesn't do much! Again, it's when the water is thrown up on the belly, which seems to attract exhaust and dust like a magnet (Ha!) that the water causes streaks and splotches - looks unsightly to the snakes and gophers, I'm sure! ;>)

NASCAR has windshield tearoffs to solve a dirt problem now is a chance to patent for aviation tearoffs to make airplane bellies etc. tidy

Where is Yosemite Sam with his pistols telling everyone to back off?

Etch a pic of Stormy--on the top and bottom! And Donny-boy on the tail.

Hmm - guess I've been building and flying too long - every time I see a picture of her on the news, my first thought is that there's a "weight and balance" problem!  ;>)

Oh, yeah, John . . . I guess I should take my own advice (don't take my advice) and put her on the cowling of my nose-heavy 750 with the Continental IO-240 and eight pounds of lead in the tail to keep her from falling on her face (lipstick is really hard to get off the hangar floor!).

Permalink Reply by John Heather on March 29, 2018 at 5:30am
If you are into Jeeps and Fords, that's OK, but us CruZers fly Range Rovers, or maybe even Porsche SUVs. John A-you need another major project! GDay from Australia, John H.