Has anyone tried to wet-wing their models?

I am interested in simplifying fuel storage as well as maximizing fuel capacity.

The biggest problem that I have thought of so far are 2: 1) actually building the wet wing, sealing off the area where the two tanks would normally go ( say, using good-old B½ ) and running the plumbing; and 2) post-build maintenance and inspection.

My goal is to successfully wet-wing the model I eventually buy, so I can carry as much Jet-A as reasonably feasible ( I plan on using an engine like the Deltahawk ).

Interesting question Jack.  I suppose the answer on the possibility of doing a wet wing is, it depends.  You don't specify which model of Zenith you are looking at and that makes a difference.  The CH-701 and STOL CH-750 have optional long range tanks which essentially install another similar fuel tank in the next outboard rib bay.  The additional capacity of the second fuel tank is far superior to what you would get by converting from a single tank to a single bay wet wing.  As for the 650, I'm not familiar enough with its leading edge tank design to say whether it would be an advantage to going with a wet wing or not.  The Cruzer might benefit from a wet wing.  The stock fuel tank is 15 gallons per side for a total of 30 but the narrower rib spacing might lend itself to conversion to a wet wing.

Some other questions which you don't answer are, are you scratch building or building from kit?  Also, what is your build experience?  If this is your first aircraft build and you are planning on building from a kit, I suggest sticking with what Zenith specifies and probably sticking with a conventional LSA class engine installation which is supported by the factory with detailed installation instructions.  If you are an experienced builder and/or building from scratch and are looking for a great challenge, then you will either have the knowledge level at the start or will likely develop the knowledge level as the project progresses to be able to come up with a successful wet wing installation.

Just be careful modifying the Zenith designs too far from what Chris has specified as changes can have unintended consequences.  The relatively light skins used on the Zenith wings are designed to support an enclosed fuel tank and not necessarily act as the tank itself.  Thicker skins in the tank area and additional baffling would likely be required.  There are probably books available on wet wing design.  Also, Vans Aircraft sells preview plans for its aircraft.  It might be worth your while to get a copy of RV7 or RV8 plans and see how Van designed his wet wing tanks.

Sorry I cannot give you any more specific information about installing a wet wing but I have hopefully given you a few things to think about.

Cruzer from scratch, under construction

A quick web search for wet wing tank design found me this discussion, might be something worthwhile here:

Permalink Reply by William Castleberry on January 12, 2015 at 9:53am
RVs are not wet wings they self build their wing tanks with the use of proseal not a current builder but know a little about engineering and the wing skins are too thin, maybe using a thicker aluminum in the wings structure and skins and probably could get away with it. If you never used proseal you would be in for a real treat! Good luck! 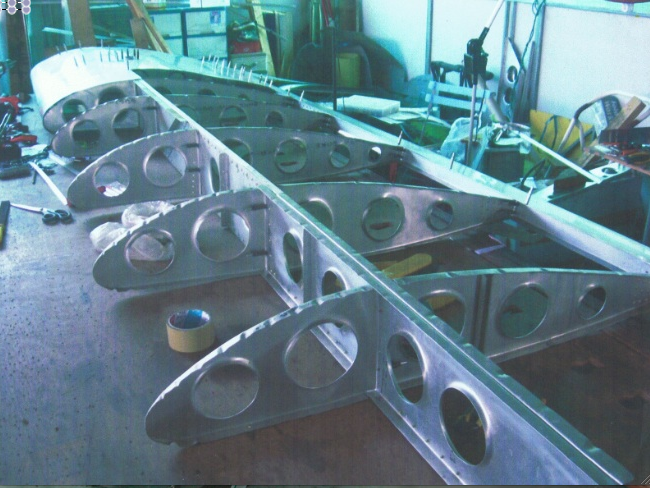 Jack and all, I did.

While building this wing skeleton above for a CH701, I wanted to convert it to wet wing and went as far as the picture below. Wing skins in the tank area were .025", same thickness as the welded tanks I already made. MEK or acetone would be used to clean aluminum surfaces and rivets before applying silicone that was good against gasohol. To keep the top wing surface clean, 2 acess panels would be under the wing/tank for maintenance purpose. Sealed head pull rivets had been purchased. My one obstacle was that the tank skins needed to overlap with other wing skins and to be sealed and riveted together. The most difficult to work with was the wing leading edge skin. I built a plywood jig to pre-form the wing leading edge skin to ease the installation, but haven't got around to make it light enough to work more easily. It has been years! Meanwhile, I am working on another pair of more conventional CH701 wings.

Another way around is to have the tank skins extended forward of the wing spar to extra L angles just forward of wing spar to overlap with a section of wing leading edge skin there. Finishing these wings and I will learn something about joggling,

No. I wont comment on pros and cons of wet wings vs regular tanks. Yes. But it is not the gentle beanie mod. I push the roof up to the maximum curve to match with the wing rear rib. Search the blog with "added head room" to see pictures. If you are interested I can send the drawings to your email.