Engine Offset - Below is me moving some info on this topic from my Viking Blog. 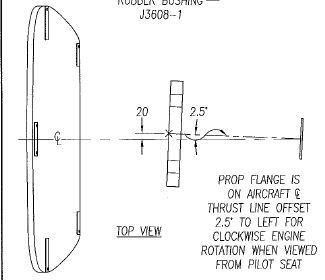 I am not sure how a slow flying aircraft like the STOL CH750 wouldn't benefit from some built-in right yaw, if the engine turns clockwise, while sitting behind the prop in front of you as pilot.

Left Turning Tendencies (Especially a factor in slow, high horse power aircraft, which the Viking is constantly promoted as producing great horsepower, and some good proof in winning the STOL competition)

Since these all affect Cessna 152/172s and almost all aircraft, the 750 is basically the same design or has all of the same factors present, is why I brought the topic up. I am not even a pilot yet, nor am I anything like a aeronautical engineer. But even my R/C planes have it built into the motor mount. I guess proof will be in finding a few people flying a STOL CH750 with a Viking in the stock motor mount configuration. I just didn't want to be the one to blaze the trail, especially since I don't have the knowledge or experience to know how important these factors actually are in the real world.

"Thrust angle can not be adjusted side to side with washers. To offset thrust the rear of the engine has to move sideways, in order for the prop flange to remain on center.

A straight mount was used in the CruZer. Even with the large propeller and low rpm of the turbo engine, the airplane has perfect directional stability and speed."

Above is a video from Viking, its for an RV-12 install, and there is mention of washers to level engine at 7:55

Anyone know if the engine mounts supplied by Viking has or needs any engine offset / thrust line recommended for the CH750. It appears it usual is a about 2 or 3 degrees to pull the plane to the right, to help remove some of the right rudder required. If its not built into the Viking mount, please share your ideas on if or how you decided to build this in. For example, did you just place some hardened washers under a mounting bolt.

"The 110 engines have offset built into the engine mount and cowling.The 130 engines do not.The airplanes fly the same."

I found this for a Lycoming o-360 on the 801. http://www.zenithair.net/wp-content/uploads/ch801/data/thrust.pdf

I am installing the Viking 180 HP engine in a CH801. I went by the factory's recommendation and designed my engine mount with about 2.5 degrees of offset. It will be a while before I get this plane in the air to test it, but I figured that a plane with this much power should take P-factor into consideration. Even my 110 HP Tomahawk has the engine offset. I designed my own engine mount, using Jan's mount as a pattern, and built a fixture so it would precisely fit my firewall. I took some measurements of the Tomahawk's mount, to get an idea of how much the engine is shifted to the left, and tilted to the right, then compared to my fixture. Zenith planes have pretty large rudders, and have a good reputation for cross wind landings, at least from what I have read, so maybe offset isn't that critical. As long as the factory recommends 2 to 3 degrees offset, I decided to go with their advice.