Myself and 3 of my co CH750 builders have been planning to install the Rotax 912iS in our CH750s since the day that Rotax announced the release of the iS. Up to this point, there has been little information available so all of us have searched for scraps of info that can feed our hungary appetite for information.

We talked to our (Canadian) Rotax distributor at Oshkosh and as luck would have it, they had bought a CH750 kit to install a 912iS and use as a demonstrator. That was great news for us, so since then we have been waiting for the 750 to be built and flown. Rotech Research have contracted the newest Zenair Build Centre in Vernon BC which is right across the field from them to the build the airplane. The project is progressing, but no airplane goes together by itself so we somewhat impatiently wait to see a 912iS installed in a 750.

Today there was another tidbit of info released. Their build is a feature on the Rotax-Owner.com forum/information site. The site has many videos on Rotax tips, product information and reviews, etc and today they released a new series called "Rotax Builder Series". The video released today has an introduction to the series with a first look at the CH750 airframe and some of the issues with installing a 912iS in that airframe. The video is at www.rotax-owner.com. If you wish to look at the video, this site is user pay site and has annual fee of $29.95.

Vic is correct, you can buy a 912iS engine and firewall forward from either Skytek (Darian is your contact there.) or Zenair in Midland, Ontario, Canada. Skytek and Zenair are dealers for Rotax so it can be a one stop shopping experience if you wish.

I have had my engine since last May (purchased from Rotech) and ordered my firewall forward a couple of weeks ago from Skytek and I expect Darian to ship within a few days. He has everything, except the cowl which is being manufactured by Zenair. Zenair is developing the mould from the Rotech/Skytek prototype cowl and there is no word when they will have a batch of those done but should be available soon. Because of the high shipping costs to Australia, you might want to wait until the cowl is available.

Darian Swartz is the guy in the know on this. He has immersed himself in the development of this design and parts fabrication of the 912iS/CH750 firewall forward package. I would recommend giving him a call.

Hi Geoff.   I believe the FWF kits are available directly from Skytech in Vernon B.C.    Also the same airport for Rotec Research who are the North American specialists for Rotax aircraft engines and worked with Skytech to develop the FWF and own the CH750 with first 912iS package (the run the Rotax Owners web page which documents the design and build of the FWF for the CH750).

Both are very knowledgable and helpful and have been a huge help during my Rotax - 750 build and their Rotax maintenance courses are excellent.

If you are talking with Rotec Reasearch please say Hi to Rob and George for me.    Rob would be your primary contact for this stuff.

Another experimental design, high wing dope & fabric, or Oratex, has a dealer in Mich. who installed the 912is. You have to run a fuel return line, otherwise it is straightforward w/no complicating obstacles.

Looks like there is a significant upgrade available for the 912iS. It is now called the 912iS Sport. A new airbox and software upgrade (plus a few other minor goodies) result in a higher torque curve. It looks like the parts are free for a limited time for those of us that already have the iS engine. Yay for Rotax! I'm pumped! http://www.avweb.com/avwebflash/news/Rotax-Upgrade-Promises-Fuel-Sa...

Does anyone have any information on the cowl fitting for the  912 iS? I have received my cowls and there is an extra piece of fibreglass that has got me stumped as to how to fit it. Images anyone?

You should have got two extra pieces (besides the top and bottom cowl). There is a piece that the air filter resides within that uses a NACA duct. This gets attached on the right side of the lower cowl. The other piece gets attached to the bottom cowl in the centre. It directs airflow to the radiator. We are going to Rotech Research next week for a three day 912iS installation/operation/maintenance course. If you have any special requests for photos, I may have a chance to take some of a 750 that is just about ready to fly away from Skytek.

I have started my firewall forward installation but have not done anything with the cowl yet, 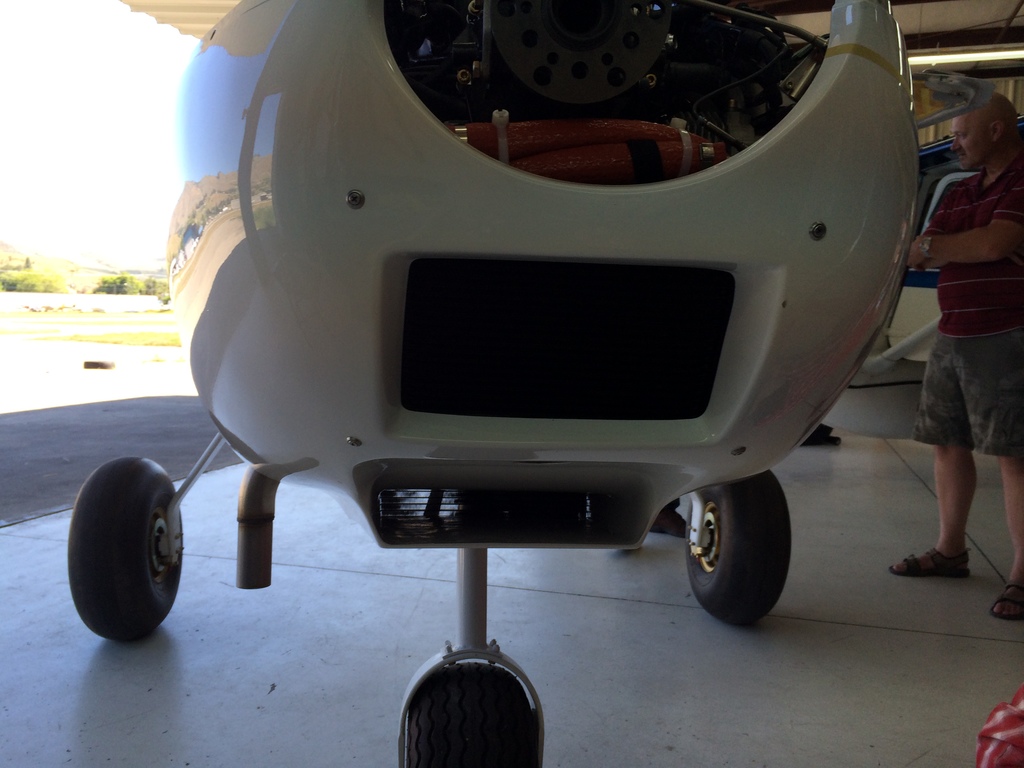 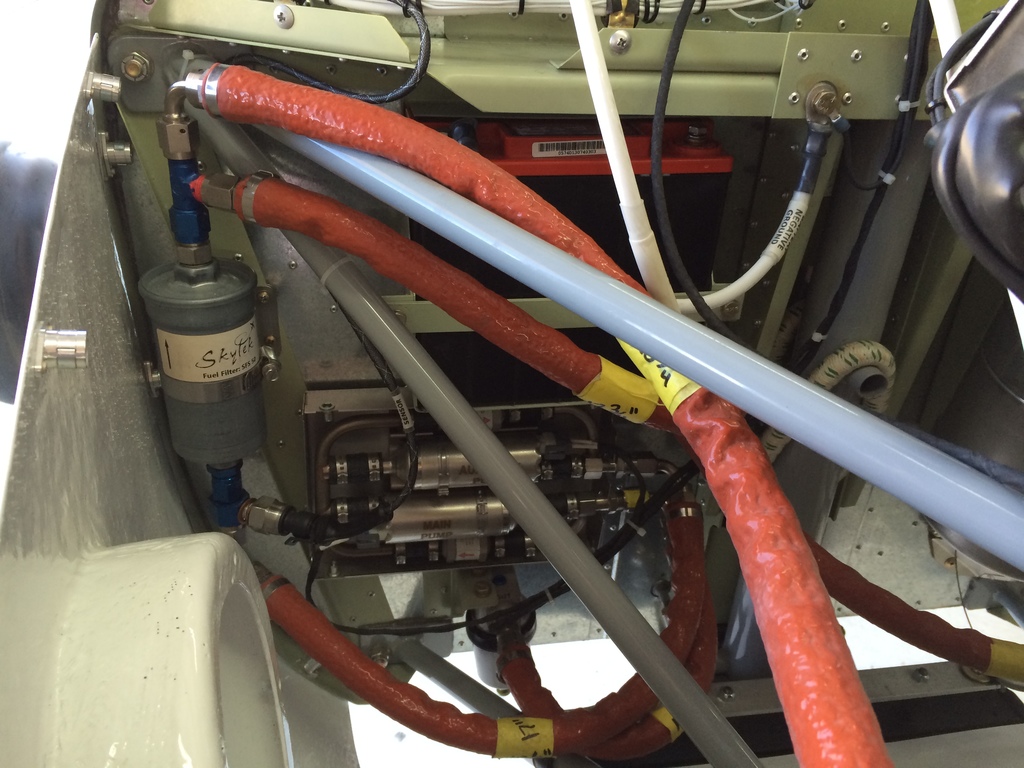 I have quite a few photos, but like always, you never have the ones that you need. These are the best that I could find. This is the plane that Skytek custom built for a customer. Skytek’s work is BEAUTIFUL!

What stage are you at?

What stage am I at Joe? How about the confusion and frustration stage. I agree with you that Skyteks work is superb. My Rotax engine was just returned with the "sport" modification done. The Rotax agent here is a treasure.

Trouble is there appears to be some sort of misunderstanding about the cowl I've been shipped We are not even sure if its going to fit, there is no information about the little NACA scoops at the front of the top and that duct to the radiator in the lower cowl cannot fit. Skytek thinks I've been shipped pre- production stuff or something.  Hopefully we can straighten it all out shortly.

The story so far.. The engine has been converted to the "Sport" specification and test run by the Australian Rotax agent. As far as I can tell, the workmanship is excellent. We fitted the motor Two days ago and learned a few things on the way.

The engine was returned to me with the exhaust fitted, as it was needed for the test run. I don't think anyone saw any need to remove it and I wasn't going to try. This means that the Two lower engine mount bolts have to be installed with their heads pointing backwards and nut forwards. Skytek told me that it doesn't matter. The upper bolts need a certain amount of wiggling to get them in but it can be done. It helps if you have a left handed friend, both for those bolts and securing the lifting point bolts for the engine.

What I didn't understand was why Skyteks instructions say fit up to Three washers (spacers)  "as required". It turns out that in Skyteks experience, the engine  mount is a little short and that means that you need to be careful with the CG going too far aft.. The Three washers push the engine just a little forward. They found that a fully loaded CH750 with primer, paint and some autopilot servos had the CG right on the rear limit (20 inches) - and that was with the Three washers. Skyteks advice was to keep as much weight as possible as far forward as possible. I should be OK because I'm putting an extra Ten pounds of constant speed propeller on the nose.

The new cowl is a thing of beauty and it doesn't have the Two little "eyebrow" NACA ducts on the upper cowl like the prototype. Skytek explained that these aid cooling for the electronics by around Twenty degrees at idle and taxiing, but don't do much in flight because the airflow sort of skips them. If you are doing seaplane or desert stuff you might want to fit a pair which is what I'm doing, They don''t cost much and I have to fibreglass in the other stuff anyway.

I've gone for overkill and bought a McFarlane vernier throttle which is also a thing of beauty. I'm not using the rubber fuel hoses, I'm using the Goodridge convoluted teflon and stainless steel braid stuff, it is an absolute joy to work with, even though you need its special fittings.

The only thing I was wondering about is the lack of an alternate air door behind the air filter, although from what I've read, these can be a PITA.

A few images. Skyteks workmanship is just great. I bought a couple of cheap beanbags to rest things on..including me. I added the extra Two washers Keith told me about. By my calculations, if I am lucky the fully loaded CH750 will have  a CG an inch inside the aft limit of 20 inches.

Permalink Reply by Don Morrisey on October 10, 2014 at 9:06pm
Geoff, did you order the full FWF kit and engine from Skytek? My CruZer kit will be here shortly and I plan to install the 912is and like you, the Airmaster prop. The CG has been one of my concerns although I have been told the One Week Wonder's CG is in the middle of the envelope, but no one at Zenith has been able to give me the actual number???...which seems somewhat strange.

The Skytek FWF components seem top notch but also a bit pricey and I'm trying to decide how much of it I want to tackle myself. I do plan to use the Stock EMU unit, which is also pricey but I have been told will save a lot of headaches and brain damage versus some of the alternatives.

You have made some great progress.

I ordered the full FWF kit from Zenair. The quality and service from Skytek is first class. The interesting issue seems to be the dynamics between Skytek, Rotec (Rotax distributor) Zenair (Canada) and Zenith (USA). Zenith, Skytek and Rotec have all been fantastic.

Sometimes I wish I had chosen an O-200 because the 912 iS and the FWF kit is very new and there are no great books full of advice on how to do stuff on the internet - yet. However you will find Caleb at Zenith is just terrific at dealing with your airframe questions, Keith is a mine of information on the FWF kit and the Rotax people here and in Canada are great.

I'm going with the Airmaster propeller because  the whole climb prop/cruise prop discussion bores me and I need maximum range and good take off performance. The help it gives to the CG is just a happy accident.

I think that by the time you order your FWF there should be a lot more experience out there to guide you. I'm trying to post stuff that I hope is helpful to perhaps answer a few questions so the factory guys don't have to keep dealing with them all the time.

So far I have no issues with the kit that cannot be fixed. My major focus at the moment is the cowl fit and then the fibreglass work for the airfilter, etc..

Permalink Reply by Don Morrisey on October 11, 2014 at 8:32pm
You'll be happy you didn't install an O200, once you're done and have the performance that engine is going to deliver...not to even mention the fuel economy.