I'm wondering what others are using for your prop pitch and what cruise speeds/climb rates you're seeing.

That sounds almost exactly what I'm getting out of a 3100 using a Sensinich prop.  I don't think you're going to get much better than that.  You can turn the prop faster, but the 601 seems to hit a wall and get real draggy just above 100kts.

Sigh, I was afraid of that

You won't get an argument out of me Christopher.

I do believe the cowling is at least part of my problem... I have a WW style cowling; 2 piece aluminum with a separate nosebowl.

Cooling drag... does that mean the cooling air going into the engine area?  Any idea what would be causing cooling drag, or what I could do to fix it?

What was the installed weight difference?

The Corvair is heavy, with many people running out of nose up trim for everything but cruise flight.  Constantly having to pick the nose up results in lots of drag.

Christopher is onto something here, regarding the RPM's. I too originally ran a Corvair on my 601, and in hindsight I would have liked to have done some more testing with higher RPM's. I don't think I turned higher than about 3050 rpms in mine, but it sure would have been fun to have set that pitch finer for greater RPM and then got some data....

Reason I never explored that was because the performance that I was getting was about the same as what everyone else with the same engine/airframe/prop combination was getting, so I just left it at that without ever really considering that maybe some performance was being left on the table.

Testing of prop pitch vs RPM - and plotting the results on a chart - can identify where the sweet spot for prop pitch is for any particular airplane.

Then drag reduction. That "601 drag wall" exists if you're flying in a nose-high attitude.

Tuft testing can be used to explore different areas for drag reduction (like drag under the fuselage behind the gear, and drag on the side of the fuselage near the flaps).  Also consider that there is a lot of cooling drag under the cowl. Make it easy for the air to go in, go through the fins, and then go out.

While the Zodiac is never going to be known as a "fast" airplane there's no reason you should be stuck flying 120mph either. The Zodiac is entirely capable of flying faster than what is comfortable and prudent.

The horsepower differences are not THAT much, and drag reduction plays a large role anyway. 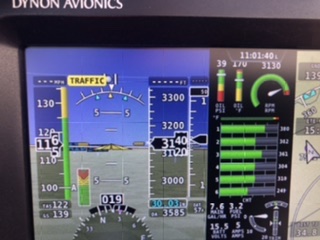 Thanks Dave.  That's similar to mine.

What do you cruise at?

Dale, if I'm flying to breakfast or lunch with my buddy who has an RV7A, that's usually my cruise. If I'm flying alone, I'll throttle back to 105-110 MPH to enjoy the scenery and burn less fuel.

What is your fuel burn at that speed/rpm/altitude?