"My rudder is too stiff and it's the bungees' fault", and other urban legends

So I keep seeing blog posts discussing how the 601 has a stiffy, rudder that is, and the only way to resolve the burdensome issue is to buy a magical metal bungee , which will magically transform your rudder smoothness to greased like butter. I call b$&&@h$t. !!!
Let's explore this shall we ? Refer to 6-b-23. In your plans, and look at your rudder and most importantly the main front strut and how it is linked way up front. The part everyone needs to focus on is the 6g-1 Main gear as it fits into the 6-g-2 bearing. That bearing grips the main, with a death grip. It is holding that gear and preventing it from wobbling as you go down the runway at 40mph, and for some, 80mph. The bearing to main tolerance is tight. Super tight, and that friction directly translates to your feet as you push the rudder left and right. It is also effected by the cables attaching the rudder to the foot petals. The balance between cable tightness and the tight bearing on the main, translates to calories burned with your feet.
If you need to loosen the load on the foot pressure, you need wet sand the part of the main in contact with the bearing, sloowwwly..don't go crazy!  keeping in mind 2 inches above and below to consider the throw as the main goes up and down. Up and Down! That is all the bungee cushions. It is there to be a shock absorber for us three point landing guys.    Grease the main bearing connection a between the contact. Move the main by hand and as you sand and reposition you will feel the release of pressure. After install and when connecting the cables, do not over tighten the cables. Refer to the tension charts and use a cable tensionometer. Don't over do it. This should easily resolve your rudder foot work and ease the pressure on your feet. I  did this  sanding and greasing twice. Once when building it. Then again after 20 hrs flying. Try it and save your self the money on  some other add on but not needed item.

The rudder system on the 601 is very well designed been around for decades,  on lots of planes,  and pretty trouble free. If you don't kill your landings on the front gear, the bungee should last quite a while.

Go forth and Fly Dudes!!

Permalink Reply by Juan vega on August 11, 2016 at 6:48pm
PS: make sure not to overs and so you don't create a chatter and wobble when using the main front.
Juan

Permalink Reply by Lawrence Michael Wilson on August 11, 2016 at 8:52pm
Juan, thanks for your suggestions which apparently works for you. This is what makes this form work. As for myself I will continue to install Vikings steel bungees. The 601XL-B I sold still has the rubber bungee and has been replaced twice in the last four years mainly for heat deterioatiion It is well greased and the lower bearing has been eased off to allow freedom of movement. The pilot that currently owns this plane and myself are ATP's with thousands of hours and don't punish the nose wheel. You still have to overcome the tension of the bungee to allow slipping for crosswinds. I have the steel bungee in my CruZer and is already installed it in the second CruZer I am building. I have to handle heavy crosswinds and the steel bungee makes handling these much easier and smoother.

I greased my strut and until the bungee was put on, it was easy and smooth as butter to turn... after installing the bungee, it was so stiff I had to press VERY HARD to turn the nosewheel.  I installed the steel bungee and it's one of the best mods I have done.  I have several friends that have also installed it and they have had a marked improvement in rudder effort.  To each their own, but I would suggest you compare the difference in a flying example before you call b$&&@h$t on it... and technically, the rubber bungee is supposed to be replaced every 5 years FROM DATE OF MANUFACTURE, not date of installation.  The bungee has a color code on the braided cover that will give you the year of manufacture.  The reason for that is because it's made of a bunch of rubber bands.  Leave a regular rubber band laying on your workbench in the open air for 5 years and see what it looks like - and try to stretch it a little bit.  It will break. 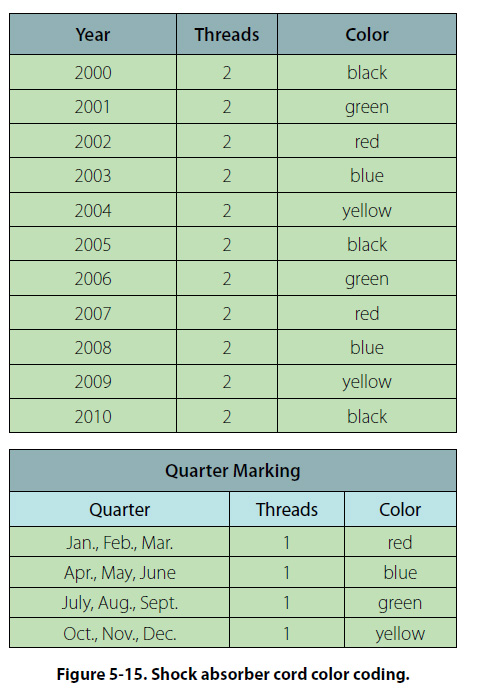 The color codes repeat every 5 years, so for a bungee manufactured in 2016 the year threads are Green.

Very cool,  thanks for the down load.

I hear what you are saying, but all adjustment issues aside, I think a lot of people have concerns about bungee failure. They die for a lot of reasons and I think hard landings just make an already deteriorating bungee fail.

A healthy bungee will absorb a landing that will destroy the firewall totaling the aircraft without breaking. I have personally seen this very thing quite recently.

Bungees have a fairly frequent manufacturer recommended replacement interval in order to assure there will be no failure. It is worth noting here that the 601 lands quite differently than the 701, which has a very real tendency to land hard if power settings/landing speed is not carefully managed. Given the potential for aircraft and/or prop damage as a result of a bungee failure due to heat, oil, or age, as well as having a permanent suspension solution, I am considering going with a spring vs the bungee.

But the tip you have is useful information when running the bungee, especially for 601 flyers.

NO ONE HAS DIED FROM THE BUNGEE FAILING ON THE 601,  JUST MAKES FOR A JARRING LANDING.  DONT CREATE A MOUNTAIN OUT OF A MOLE HILL,  IT ONLY SERVES TO PROMOTE THE SALES OF SOMEHTING THAT IS NOT MISSION CRITICAL.

RUBBER BUNGEES HAVE BEEN AROUND SINCE AIRCRAFT STARTED FLYING,  IF YOU WANT EASIER TO SERVE BUNGEE,  THEN GO METAL SPRING,  BUT DONT SCARE UP EVERYONE TO TRY AND SELL THEM SOMETHING THAT IS OPTIONAL TO WHAT WORKS .  AND ASSOCIATING STIFF RUDDER TOA BUNGEE IS IN MY BOOK NOT CORRECT.

THERE ARE TWO DIFFERENT THINGS HERE,  SOMEONE TRYING TO SELL THE ZENITH GROUP A PRODUCT, A STEEL SPRING, AND STIFF RUDDER, NOT A SPRING ITEM.  TWO COMPLETELY DIFFERENT THINGS.

IF YOU WANT TO SMOOTH OUT THE RUUDER,  REFER BACK TO THE BEARING AND CABLE RELATIONSHIP.

IF YOU WANT TO BUY SOMETHING AS AN OPTION TO RUBBER BUNGEE THAT NEED TO BE REPLACED FROM TIME TO TIME,  LOOK INTO THE METAL.

I was talking about the bungee dying.

With my STOL 750, I had a slightly frayed bungee after a few hundred hours and made a note to replace it at annual.  Didn't make it - a short time later, I was taxiing back to the hangar on my turf strip and heard a "POP" and suddenly the nosewheel steering seemed heavy. I knew what had happened and tried to keep the nose light during the taxi.  Although the bungee had popped, the steel ring held the nose up and I had 9" prop clearance, so for me it was a non-event.

Replacement was easier than I anticipated, but, I found a couple of the nylon bearing bolt holes were partially stripped and repaired them with heli-coils. Others have through-bolted the bearing block and reinforced it further (didn't you do that, Brian?) and l would do that if I had to do it over!

Brian, where did you get your "5 year" number - from Zenith?  I contacted the bungee manufacturer and he said "there was no fixed replacement interval recommended" by them (the manufacturer).  I think 5 is reasonable since it is primarily a rubber part and I quite arbitrarily decided I would go with 5 years or at the first sign of any fraying.

It has been my observation that the Rotax people seem to suffer bungee failures more often from heat and some have constructed heat shields to protect the bungee. Also, oil and dirt don't help!  My Jabiru 3300 is relatively light, so it is mounted pretty far forward relative to the firewall and the bungee area does not seem to be particularly hot, so I've not done any heat shield or other measures.

I do think Juan has hit on a good point - there is a pretty complex interaction of rudder cables, steering arms, bearing friction, bungee stiffness, lubrication, etc. All the Zenith's use a similar system, and reports seem to vary wildly over stiffness or "notchiness" of the rudder pedals.  Some say you need to "break in" a new bungee and that it will ease up.  I don't know if I'm lucky or good, but my STOL 750's rudder has always been silky smooth.  It is a stock set-up with the exception of grinding back the rear corners of the bearing block to allow full deflection of the rudder. I liberally grease it with while lithium grease.  As I said, it's smooth, and I've had other pilots fly the plane and they agree and said they can't feel the centering notch, either, which some have complained of.  When I replaced my bungee with a new one, I couldn't tell any difference - still smooth!

I don't have anything against the steel bungee, but there is some weight and expense. As I've said before, if you're having problems, it's probably the way to go. However, if you're still building, you may want to see how your build flies before adding the steel bungee - you may be "fixing something that ain't broke."  It is always easier to make things stronger, bigger, and heavier, but Chris Heintz is the master of simplicity and lightness!  ;>)

Speculation: a hydraulic shock/spring would be another elegant solution but of course, heavier. Someone waaay back in the Forums either suggested or intended to use elastomeric or rubber donuts, which would be very simple and perhaps as light or only slightly heavier than the bungee.

and yes, I mounted my lower bearing block with thru-bolts and a carrier.  I've seen and heard about the bolts stripping out, since you're threading a machine bolt into a piece of plastic.  If the bolts pop, the steel ring on the strut is meaningless. 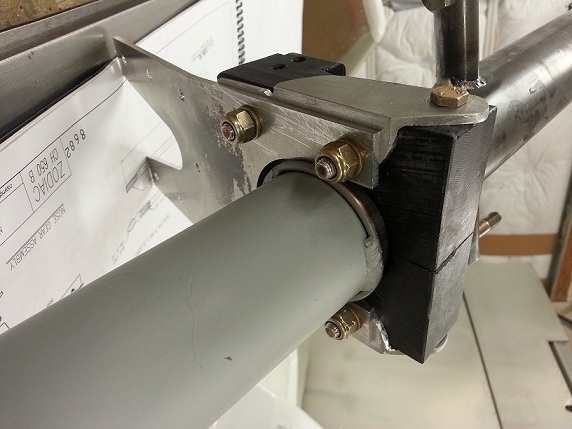 I am running a heavier engine (Corvair) and with my strut mod and the steel bungee, it came in at 805 lbs, which is a very good weight for the type.  The steel bungee adds maybe 1 lb, and my carrier adds maybe 10 ounces.  Everything else on my AC is built to exact Zenith specs, and I will NEVER have to worry about replacing the rubber bungee.

Thanks for the reference!  Looks like the FAA and I finally agree on something!  ;>)