Do you fly with someone who keys the mic and says "I'm burning .0004 gallons per hour, how about you?" as you note your fuel consumption and look for the cheapest gas to plan your next stop? If so, the HACman may be something you might be interested in.

I don't have one, though I may later, and I prefer to let my friends use their planes as test beds for items like this. I have to say, I was skeptical, but after about a year of listening to them and their inflight fuel reports, it seems to really work. It works by leaning the mixture using manifold pressure to change pressure in Bing carburetor float bowls and impacting the draw of fuel through the jet.

In the Avid (Jabiru 2200), the Kitfox (Rotax 912ULS), and the Pelican (Rotax UL) that we fly with, the results are consistently showing a 20-25% improvement in fuel burn in altitudes over 4,000 ft. The higher the altitude, the greater the impact, so for low and slow off the deck you won't realize it as much, but when you want to just go high and cruise and optimize your range, this can really be the ticket.

Normally when you add something like this there may be a downside in that you're adding another failure point to your engine, but on this, if it fails, your carb and engine revert to normal operation. If you back off the throttle to descend, the engine acts just as it would in a mixtures control GA aircraft where it starts to run rough as it becomes leaner, though it is more pronounced.The pilot of the Kifox tested it from sea level to 18,000 ft, and though it has minimal impact at lower altitudes, when you hit 4,000 ft and above, the fuel savings becomes much more significant.

It costs about $200, and there is plenty of info on the particulars of how it works and testimonials on the internet. For someone that just likes to go high and cruise to a destination, or those flying at altitude in the mountains and need to stretch their fuel consumption, this may be really appealing. And not to take anything away from the improved fuel consumption of the Rotax 912 iS, but this may be a way of pretending you have one.

HACman control in panel of the Kitfox 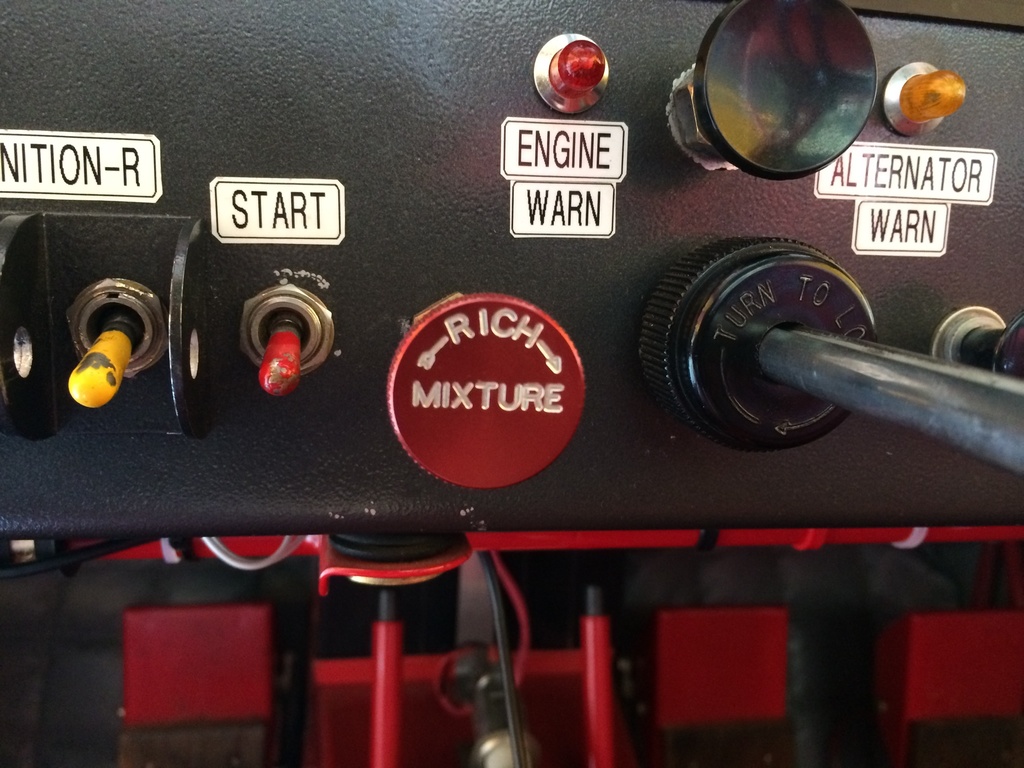 I've seen this mentioned in the Yahoo Jabiru Engine group and some report excellent results and some not-so-good such as their engine quitting unexpectedly! However, everything on that forum has to be taken with a grain of salt because some of the participants have highly modified their engines and some have "homebuilt" their HACman systems for a few dollar's worth of parts (whether they have modified engines and home-made HACman systems are not always mentioned in their posts). I spend most of my time in the "low and slow" category, so I wouldn't benefit much.

I know what you mean, when the person that is using it on his Jabiru mentioned how much he saved by building it himself, and all he had to do was take some parts from his aquarium pump, I felt maybe this wasn't for me. What made me look at it more closely were the results of the other two, who purchased the unit and installed it per instructions. The high time Kitfox/GA pilot flies quite a bit from SoCalif to Washington, and when he endorsed it, I started paying attention.

Like you, I'm not one to linger at higher altitudes unless it's due to terrain or mountains, but with him, it really works out well flying to Washington and Idaho from here.

The self built and modified application did have his engine shut off while using it, but he has also had his engine shut off before due to tinkering and putting it on the edge. The Kitfox pilot has never had a problem, though he is used to mixture control in GA aircraft and very attuned to his aircraft.