I want to share this information about my fuel system, and need opinion . This is the diagram of my fuel system for bmw r1200 engine, Fuel injected.

Basically, is the wing tanks , with an extra header tank of 1.5 liter, placed behind the pilots seat.

In the base of this header meets 4 connections: 2 for each fuel tank and one for fuel efi pump and other for return .

In the top of the header, i placed one ventilation , shared with tee connector to the two tanks vents with banjo bolt , near the fill cap.see illustrations.

The idea is that with communicating vessels principle, the header tank will be filled up to the wings tanks level, wich it seem to be sufficient.

I placed in the base of the header tank, an alarm of central tank. CTLF for next.

I was really happy with the system , and i was flown about 70 hours on it.

But now that i am making longer and longer flights, i had the following problem:

If i made two 360 degree turn , the CTLF dissapear, up to the next 20 minutes of flight.

I can see on the vent lines a little SIPHONING of fuel . Maybe this siphoning the cause of the low central tank level???

In this previous 70 hours of flying, wich includes flights up to 2 hours , never appeared the CTLF!!

the first time appeared when i filled the tanks near full for a 4 hours flight  , and in the 25 minutes , bip bip bip!!! CTLF 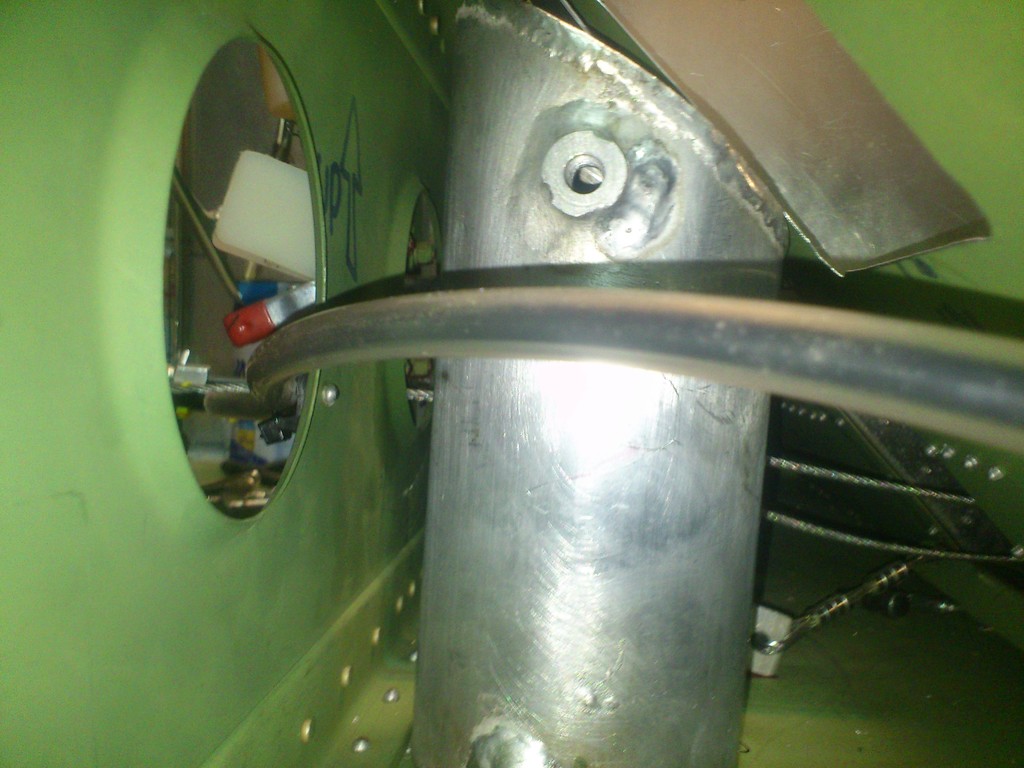 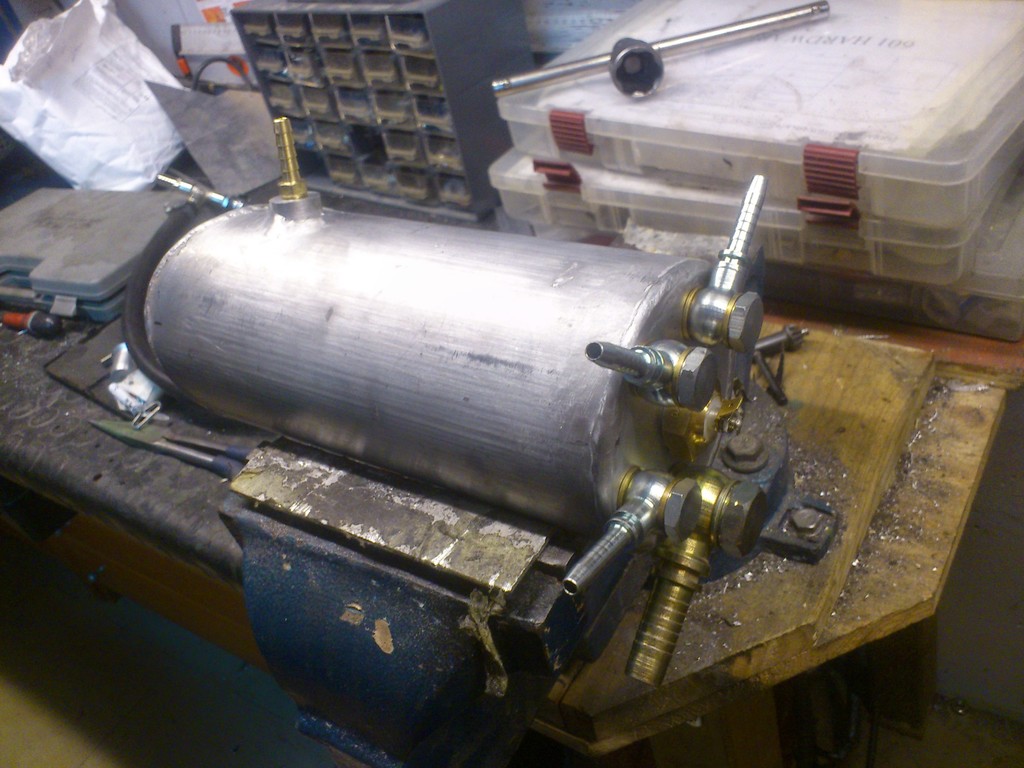 First of all, do I understand that "CTFL" is an acronym for "Central Tank Fuel Level" Alarm indicator (indicator light?)?

Assuming that is the case, my gut feel is that you are correct with your analysis of the vent lines possibly getting an air lock (as you noted in the red descriptor text). When gasoline passes through the pressure regulator on the fuel injector system the pressure drop will allow fuel vapour to come out of suspension. This forms on top of the liquid fuel in your central tank but if there is liquid fuel trapped in the vent line in any low spots, there will not be enough vapour pressure in the central tank to get past the liquid trap. The amount of vapour builds up in the tank until your low fuel warning alarm comes on. I am guessing that when you did some maneuvering that you may have dumped some of the liquid fuel trapped in the vent line out.

This theory is just a guess on my part. If it is correct then the solution would be to somehow take any low spots out of the vent lines.

Hope this helps and good luck with your troubleshooting.

Hi Rubens, Looks to me like you are burning fuel faster than it can flow in to header tank.

1.  Have you tested flow rate?

2.  Are your wing tank vents cut at angle so there is some positive pressure in tanks?

3.  Also you could try isolating the vents.

Note:  Cessna had some issues with 172 having only one outside vent to both tanks.  Not sure what they did to solve it.

4.  And lastly is it possible that fuel returning from injection system is getting too hot.  Aircraft turns really should make no difference if they are coordinated.

You seem to already have the plumbing needed.  When I hear someone using small header tank it is normally to feed return from injection system instead of plumbing to wing tanks.  But you already have an extra set of lines to the wing tanks.  And the extra liter and a half fuel in header tank does not extend range very much.

Thanks very much for help.

The base of the idea of put header tank is for ensure continous flow to the injection system pump, in every attitude.

is not indeed for reserve fuel for flight.

I think that if i put the efi fuel directly to tanks, with selector valve, i have the risk of fuel starvation in gusty day or in uncoordinated maneouvres.

how can i investigate the cessna 172 fuel problems? thanks

I don't know why fuel would flow any better from header tank than wing tank.  Every additional item added to any system beyond what is necessary increases probability of failure.  Your need is wing tanks, duplex fuel valve and supply and return lines.

Some low wing planes have a small (5 gal) header tank so fuel can gravity flow to engine and use fuel pumps to fill header.  But with your header lower than the wing tanks you do not get any benefit that I can see.

Permalink Reply by rubens rando sanchez on October 2, 2017 at 12:54pm
At first , thanks very much for the response, it helps a lot.
Answering the questions before commented, yes, the CTLF is central.tank low fuel alarm.

The flow rate was tested. The right wing, in the worst condition, with the minimum possible fuel, flows at 28 liters per hour, and left wing at 32 liter per hour. I supose that when both wings are leveled, the flow rates will be 28 plus 32.

Yes, i have made the 45 degrees cut in the fuel tanks vents.
I still thinking on the problem with the vent lines....

If i put 1 facet pumps on each tank to fill the center tank?? What do you think?
Regards

Pumps are good.  I would really prefer to get rid of that header tank.  It is not needed since you already have lines to tank to use for fuel injection return.  Also do away with check valves.  IMHO your system is much too complicated.  And the fancy hardware on the header tank looks expensive as well.  The more you have the more chance of failure.

Of course these are experimental planes so not having to conform to standards is part of it.  Best of luck regardless of your chosen path.

Actually, the more I think about it, the more I agree with (the other) Joe. I think it very well could be that your header tank is not filling fast enough (especially if there is some positive vapour pressure contained in the header tank). I agree with Joe that the best solution would be to abandon the header tank and install the duplex control valve so that the return flow will go to the fuel tank being used. I know from personal experience it is hard to admit "backing up the bus" and redesigning/rebuilding something is probably the course of action that one should take. This of course is only my opinion and it is not from someone that is going to be sitting in the pilot's seat...

the small header tank is designed for ensure continous flow in every attitude.

think that, in the past 70 hours of flight , including test flights , all were seem to be ok.

The interesting thing is in the  last long flights , where this alarm  happened. Luckly i installed that alarm.

Maybe , if not , there was the posibility of big surprise!

Permalink Reply by david shrader on October 2, 2017 at 6:06pm
I think you got a flow issue. Return fuel, or engine supply fuel is messing up your supply fuel from the tanks. I can't see any easy/safe way to troubleshoot your problem. I would relocate the supply lines to the top of the tank if possible.
Run two supply lines through a T an your fuel flow comes from only 1 supply at a time, I think you have something similar happening

You have essentially, three "open" hydraulic systems. Only the header tank is subject to the suction head of the engine pump.

If all of the fuel lines are the same size, basic hydraulics suggest you may well drain the header tank faster than the wing tanks can gravity fill the header.

If all of the fuel lines are the same size, basic hydraulics suggest you may well drain the header tank faster than the wing tanks can gravity fill the header.

By connecting the three tanks with a vent line, your pumps are hydraulically isolated from the direct pump suction. The system relies on gravity/hydraulic pressure to to re-fill the header tank from the wing tanks.

When you make the 360 degree turn you are increasing the gravity/hydraulic pressure from the high wing tank and it will increase the flow to the header tank. At some point this is apparently filling up the header tank enough to disengage the level warning.

Putting Facet fuel pumps to refill the header tank will create a new series of problems. How will you control them? If you leave them both on they will be pumping more fuel than the engine pumps needs and you will end up filling the header header tank - and pumping fuel back through the vent lines to the wing tanks.

The most correct solution would be to eliminate the header tank - but this would necessitate plumbing fuel return lines back the wing tanks. This would be a major PITA to do on a flying aircraft.

Your last paragraph is what I suggested earlier and then Mr. Harrington concurred.  It looks to me like the lines he is using for vent connection from wing tanks to header tank would work for return lines.

Permalink Reply by Gary Welch on October 3, 2017 at 12:33pm
You're right - and I missed your point. I am not all familiar with fuel return systems. But the concept of using the vent lines certainly sounds feasible.