With Spring in the air, thoughts turn to fly-in's and camping!  Most years, I fly down to Sun 'n Fun and camp in the Homebuilt Camping area. I've found that the cheap "dog tether" tie-downs are worthless (they snap or bend too easily) and heavy-duty spiral tethers are difficult to place in hard ground.  There are numerous commercially-available tie-downs that all have their pros and cons.

However, being a homebuilder, I naturally wanted to make my own!  If you Google "EAA tie down plans," you'll get this link.  I really like this design since it involves driving spikes into the ground rather than a spiral tether.  I made some modifications that I think make it even better.  Here's a pic of the end result: 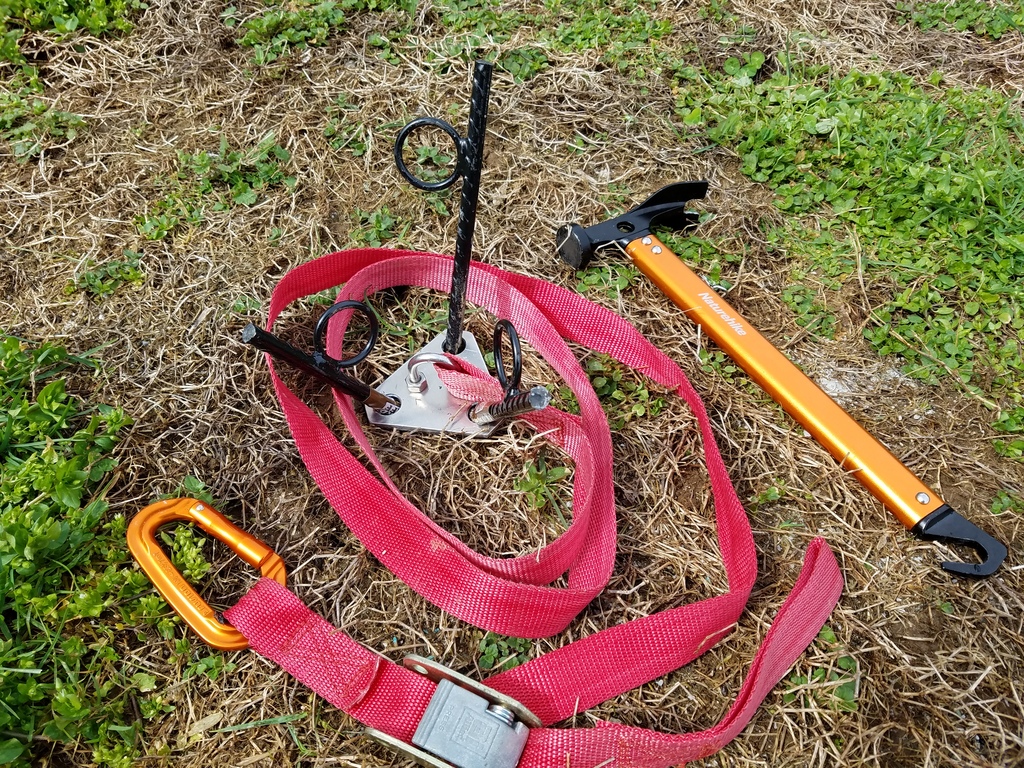 As you can see, I used an aluminum rather than steel plate since I had that on-hand.  I think steel would be better (and heavier!) for long-term durability, but no more than I use them, I think the aluminum will hold up OK.  Rather than fabricate the 18" x 1/4" steel spikes called for in the plans, I simply bought some "Yard Tuff" 18" x 3/8" rebar stakes on Amazon - kind of pricey, but they have a welded steel ring (helpful for twisting and pulling) and an anti-corrosion coating (looks like powder coat).  Mostly good reviews on Amazon and I lucked-in to finding an "Amazon Warehouse Deal" and got them for a little less.  I left one stake high so you could more clearly see the welded ring and spiral fluting - that spiral helps to "unscrew" the stake when you try to pull it out.  Since this picture, I cut nearly an inch of the stake off the top just to lighten and shorten it slightly, leaving enough stake I can hit it with the hammer and not hit the ring.  Even though the tie-down straps are bright red for visibility, I wouldn't want to think what would happen if someone stepped on those stakes barefoot, so I plan to get some bright orange plastic "caution" tape and flag those steel rings for even more visibility.

I have a lightweight camping hammer that also can be hooked into the welded ring to give leverage to unscrew it and/or pull it.  The tie-down straps have a simple latch for quick adjustment. I cut the hook off the end of the strap and replaced it with a carabiner - hooks can slip out of tie-down rings if the wing is rocking up and down.  I'll probably wrap the carabiner with some self-fusing "rescue tape" to avoid metal-to-metal contact on the plane's tie down rings.  Both the straps and the carabiners are rated higher than the likely tension required to pull out the tie-down. If and when I have to replace the red straps, I'll probably just get a strap twice as long that I can loop through the tie-down plate and the plane's tie-down ring and eliminate the carabiners.

I fully staked one of these and could not get it to budge, even when pulling directly upwards.  If placed at an angle to the tie-down ring on the plane, I think it would be extremely difficult to pull out of almost any soil type except loose sand!  Rather than make the slightly different plate for the tail as the EAA plans depict, I simply made 3 identical plates of the above design.  The whole kit, including a canvas tote bag and the hammer, weighs 8 lb 1 oz.

As usual, we can expect excellence from John!

What about grounding against lightning, John?

John, looks great...strikes me as an improved version of the FlyTie system!  I need a hammer like that - name brand?

The hammer is branded "Naturehike," but there are numerous brands on Amazon and they all look identical - likely they're all made by the same manufacturer in China and re-branded - I'd just get the cheapest one!

BTW, I got to inspecting my tie-down straps carefully and they look pretty faded and worn (they're probably 10 or 20 years old!) and were only 500 lb rated (I think!), so I decided to go ahead and get some quality NRS straps.  I got them twice as long as needed and that way I can just loop them through the tie-down plate and the tie-down ring and no carabiner required.  They're rated for 1500 lbs and when looped, that's going to be good for 3,000 lbs - I think that'll be more than adequate! ;>)

Thanks John, found all the hammers on Amazon.   Unless you had rebar around the shop, it would be hard to beat the price on the Yard Tuff stakes - 12 for $32 already painted, sharpened, and welded ring.  I am going to order a pack, then head out to the garage to lay out the base plates.  Dave

I flew to Sun 'n Fun last week with an overnight at Cedar Key on the way down: 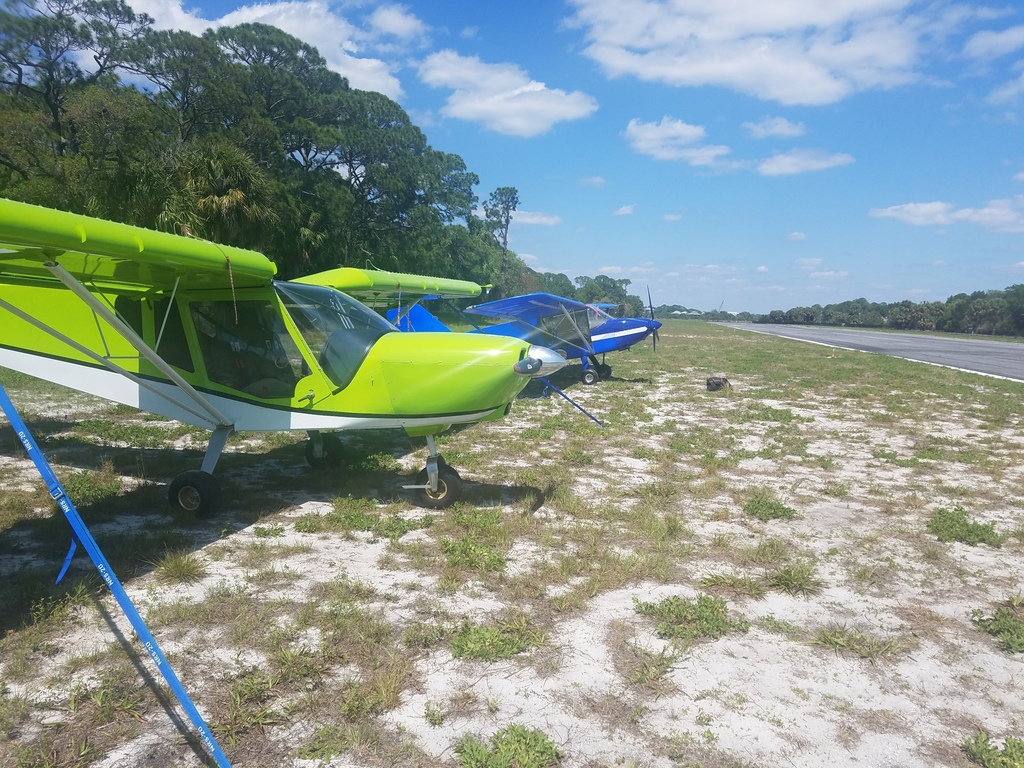 As previously mentioned, I updated my straps with new NRS straps and deleted the carabiners.  Since the straps are looped around the tie down and the plane's tie down ring, they're good for 3000 lbs each!  I found the system held very well - even in the sandy soil at Cedar Key.

In the Homebuilt Camping area at Sun 'n Fun, the soil is a little denser and held even better.  But in both cases, if positioning the tie downs at an angle to the wing so any pull would be at an angle, I could not budge the tie downs!  This proved to be a good thing because the Sunday following Sun 'n Fun, a very strong line of thunderstorms came through with high winds.  My 750 was tied-down on a slight uphill slope, which had the tail relatively low.  I tied one of the dual sticks full forward with a stout bungee connected to the rudder pedals and this kept the elevator down, which was facing into the wind. During the worst part of the storm, the plane did not even shudder! (Whew!)  Here's a pic during the peak of the storm: 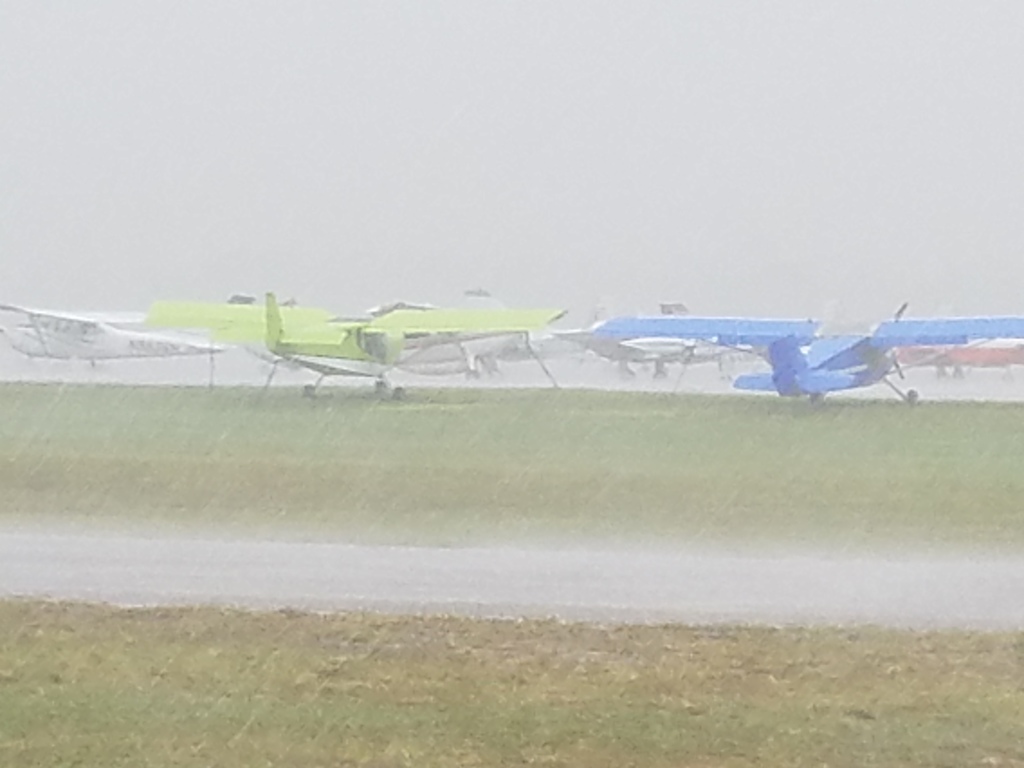 Afterwards, when departing the next day, I used the hammer's hook in the stake's welded ring to give each stake a counter-clockwise twist to break it loose from the soil and every single one of them easily pulled out if you pulled directly in-line with the stake.

John, did you camp at the airport on Cedar Key?  I discovered this little gem of an island on my get out of New England winter tour in the RV back in March.  I visited the airport but there were no planes there and no FBO.

Camp at Cedar Key? Heck NO!  LOL! There are no facilities there - just a runway and a paved parking area for 4 planes - usually full!   Before "roughing it" by camping in the Homebuilt Camping Area at Sun 'n Fun, our strategy has always been to overnight at Cedar Key for four very good reasons:

Truthfully, though, it is far from "roughing it" in the HBC at Sun 'n Fun.  The local EAA erects a huge tent, serves continental breakfast, lunch, and dinner, and has coolers with everything from water to imported beer.  There is no fixed charge for anything - they have a coffee can on the table and you make a donation for what you feel it is worth to you - proof positive there are still good people out there!  :>)

There are orange plastic caps made for rebar that increase visibility and minimize the consequences if you do happen to step on one. Tripping is another matter. Pin flags? Engineer's flagging?

What do you think about using sandbags (filled with on-site sand or rocks) inside a strong net where the surface is too soft or hard for the stakes? I've heard of bush pilots using them. How much force needs to be resisted? Is a 2x fudge factor enough?

In a pinch, one can always improvise a "dead-man."

I eschew Amazon at all costs.

I guess lightning isn't an issue.

John, always good to get a real field report!  Doesn't sound like much to improve upon.  Timely post, here is my "JA knockoff" I just drilled this morning, already have the Yardtuff stakes and 20' NRS straps, awaiting my S/S U-bolts.  This place has some good stuff  http://https://www.bosunsupplies.com/standard-u-bolt/ 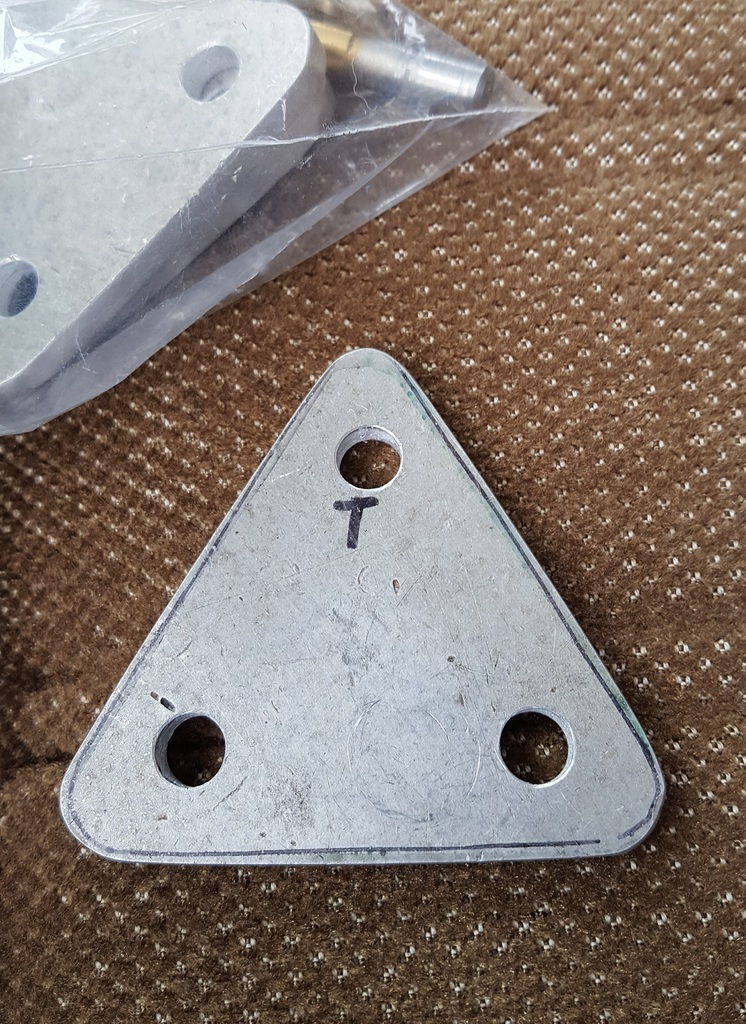 Camping season is about to start up this way!!

How much water did the "Gecko" pickup in that rain?

Hardly any - A few drops dripping down from the windshield/Ed.1 "flat window" junction and that's about it!  I tried to seal that area during construction but obviously didn't quite get a perfect seal! Ha!  On the bright side, the plane got a good wash!  ;>)

Sounds like you did a pretty good sealing job.  Once the weather warms up, I plan on doing a leak test to discover any water infiltration areas.  Based on my cold weather flying, I know will need to address sealing gaps near the windshield/cabin frame tube cluster for the wing main spar attach points.   Hopefully, everything else is sealed up well along the top...