Ducting on my Viking 130

While I was not experiencing overheating early on in my flight testing, we got a really bad run of hot weather in Seattle, and I was getting elevated temperatures after initial takeoff and climb to pattern altitude and was pushing low 220's. Even trying slow lower power climbs it was not possible to reduce th temps to below 218, so I knew I had to deal with modifications to my cooling.

I started by replacing the supplied 1/4 by 20 100mm long rods with some longer ones and opening up about 6-7 tenths on in inch the radiator opening.

Secondly I created ducting to flow all the air coming in the lower ram to force it into the radiator.

The last was to wrap the muffler with exhaust wrap.

Between these cooling options I have been able to have virtually unlimited climbing in fairly warm weather without pushing over-temperature. I still get a bit higher fast cruise temperatures, but I don't have the wheel pants on, so when they are installed I should get a faster cruse with less power and that should help speeds, fuel burn and temps across the board. 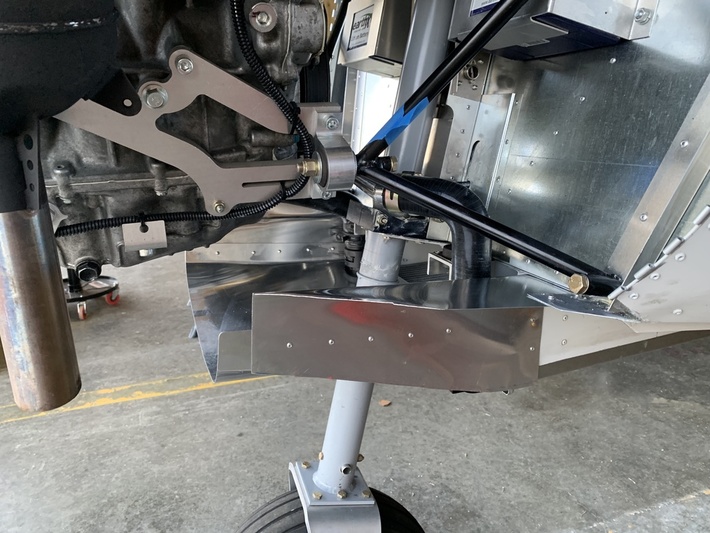 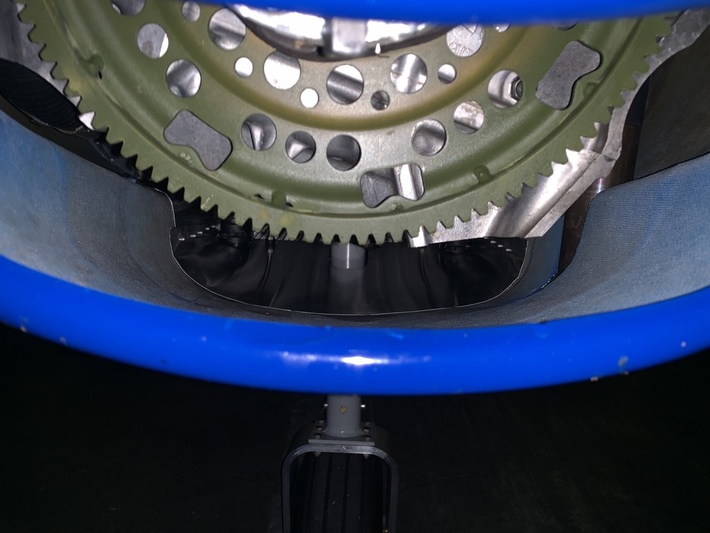 Loren, I think there is a glitch in the App “GPS Tracks” when you select units=nautical, the altitude scale (only) on the right, a bit “wonky”?  I’ve just taken 2 screenshots of that same log, with the units set mph and ft and the scales are right.  I’ve also stretched the timeline; climb and glide phase.  I can move the “ticker” along within the App. You can’t obviously in these screenshots.  But I can export the logged data, which is handy, for share purposes.  The GPS Tracks App I regard as my black box.  All my flights are logged, should anything happen.

I’ve just rolled over my 40 hours.  We are obliged to submit 6 of these Flight Test Reports (or similar) with the paperwork, to obtain a “Permit to Fly-Ongoing”.  This from our Governing Body; Recreational Aviation Australia.  Let’s hope I get my project over the line.  I trust you have seen the YouTubes of 19(the local code for amateur built)-1583 flying?

I do plan to repeat the test and will be looking closely at temps.  regards John.

PS. Poor weather forecast for the next week, so no imminent feedback. 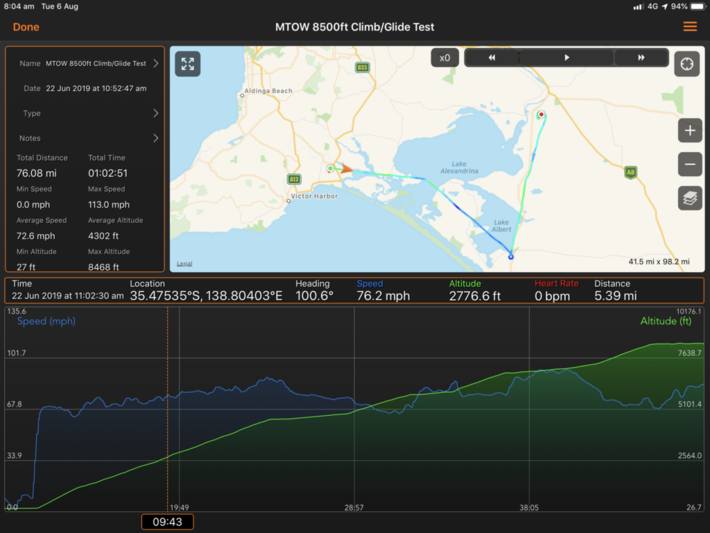 Hi John.  Your airplane is performing like ours.  The original radiator is plenty for normal flight.

Cruzer/Viking 130 people - suggest take a look here from the 3.25minute marker for just 90 seconds for my EMS readout/typical cruise performance.  Admittedly a coolish morning at 1500ft above sea level.  80 to max. 85C coolant temp on climb out, loaded at our regulated 600kg MTOW.  Over 3.9 hours, this trip, fuel consumption 10.5 Litres/hr.

Good fun and reliable all round.

How does the thermostat mod help?

The thermostat mod was thought to help vent the coolant system while filling.  We didn't see an improvement.  Another thermostat mod we tried for better venting is to remove the thermostats jiggle pin.  This one we believe helps a little.  Because Nalcool is more viscous than other coolants, air cannot vent as easily through the jiggle pin, so we removed the pin.

Update on the cooling. After the initial modifications I had no issues even on the hottest days until I got out of the 40 hours of phase one and started flying with my Son, also a big guy.

I tested with 250lbs of Sand bags and went thru all the maneuvers to ensure the handling of the plane at full gross weight with me, my son and fuel fuel and 50lbs of bags. While rate of climb was more like a 172 than the 1200fpm I was used to, it was well behaved.

So when the leash was off I headed to Mt. Rainier with 88 degree temps at the airport with my son on board and we could barely manage 250 per minute climb without going to 220 degrees on the coolant. When we got up to altitude it was OK, but I was not happy having to baby the power.

The next day we got up and dropped the radiator a full inch more, even with the training edge of the cowl scoop, and modified the radiator sides and the scoop to use the new position. I think this added about 25-30% more intake area. We waited till about 11:30 am and 78% to take off and headed to McMinville, OR where it was 95+ to do a torture test. I climbed to 9500 feet wide open without any issue, coolant peaked at maybe 210 degrees, and cruised at 6.5gph under 200.

We went to see the spruce goose and the space Museum and waited until 4:00 pm for peak temperatures and took off WOT. Temp was 109 on the runway and density altitude was 4000 ft+ over real altitude. On the first climb out to pattern the gearbox hit 225 (normally 160) so I headed down. I drained the oil and found 12 on of oil. I had changed the night before when cold and added a few ounces "For good measure" to the overflow. BAD IDEA. In the heat it all drained into the gearbox and there was no where for the oil to go but make hydraulic friction and it overheated. I put the correct amount in and went up again. This time the gearbox temps were fine and the coolant temps stayed under 217 while climbing out with OAT over 95. I was able to sustain 400-500 FPM and get into colder air then climb WOT until 8500' and cruised under 200 degrees again with OAT at about 70 degrees.

I am not sure I would want to try 1600lbs gross in 115 or 120 degrees, but in handled it acceptably at 105-109 and we made it home. On a warm day we probably could have climbed WOT all the way to 8500 with no restraints temperature wise.

I don't know I could ask any engine to handle 1600lbs WOT climb-out at 109 temps, so I guess I am at an acceptable level of cooling especially since I have to go far from home to get this type of acid test, and during the hottest part of the year.

We got tired of playing around with high temperatures during climbs, and removed most of the cowl's bottom.  This was a significant improvement.  We plan to redo our lower cowl this winter to keep the radiator separated, and also copy Mike Hille's radiator enclosure. 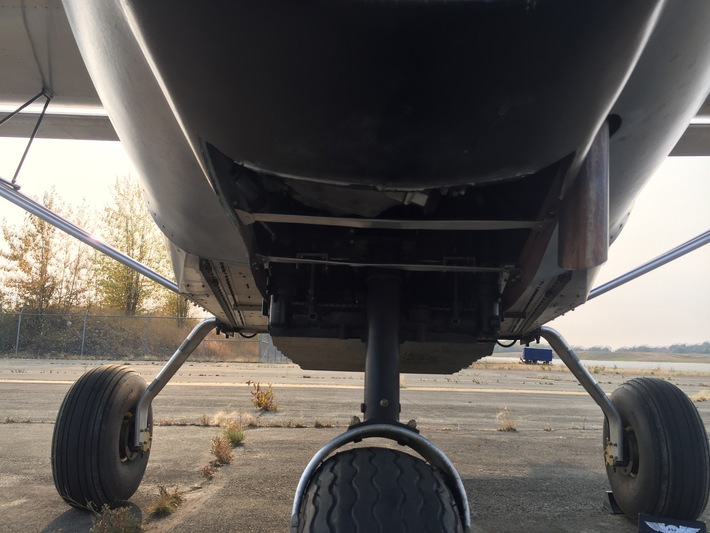 This aircraft has lovers covering the exit of the radiator

I would remove them

Why?   We flew with and without the louvers and the temperatures were the same.  Maybe you cannot see clearly, but there's lots of space between the radiator and louvers.