A popular, recurrent topic in the Forums centers around the Zenith nose gear bungee suspension design.  As I always say, Chris Heintz is the master of simplicity and lightness and you can't get much lighter than his bungee system!  As with all designs, there are some inherent compromises:

A popular alternative is the "steel bungee," which does not require periodic replacement, is unlikely to break, and induces no additional resistance to steering inputs.  The only disadvantages are weight (I've seen 3.5 lbs quoted?) and expense.

An alternative bungee design may seem strange coming from me, since I have the Zenith single bungee system and it works perfectly! My rudder is silky-smooth and I and other pilots I've asked to fly it cannot detect the centering notch in the bearing support. However, I have had one bungee break (it was a non-event - had 9" prop clearance after breaking) and since some do have bigger problems, I was determined to see if a new design could offer some improvements while keeping weight and costs down.

Here's a sketch I came up with: 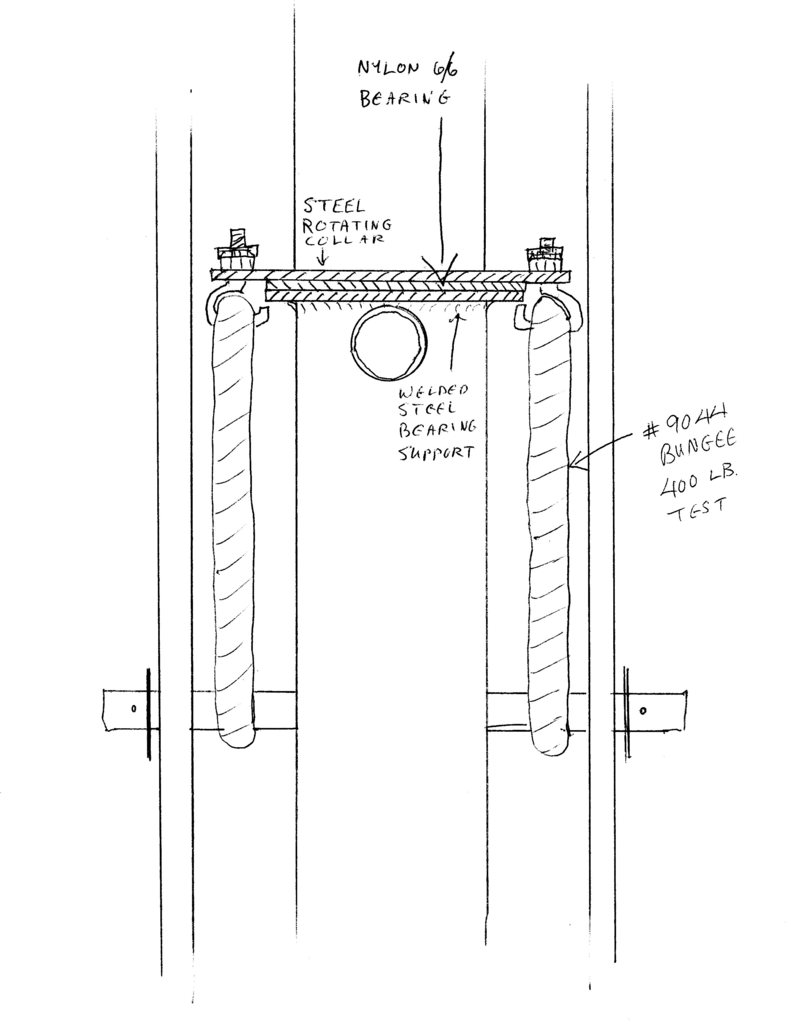 I've already thought of some improvements to this design: 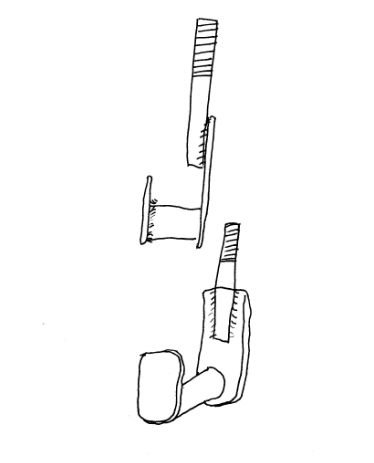 While still using bungees, there are some advantages to this design:

This is merely an experimental and speculative design at this point.  I'm thinking this might be an interesting winter project.  I'd be interested in comments, constructive criticism and suggestions as I refine the design!

Not seeing much of a downside here.

The toughest thing is designing a "hook" with a threaded rod for the top of the bungee. I went over to the hangar yesterday and measured the width of the nose gear support that the nose gear leg runs vertically in. It is 3.90" wide and the gear leg is 2" diameter. That only leaves 0.95" of clearance on each side of the gear leg and there are a few rivet tails protruding that might be close. (I suppose those could be drilled out and the tails placed on the outside or even better, flush riveted on the inner face of the support). It is complex in that the flanged face of the support is running at a slight angle to the nose gear leg so the clearance varies. The absolute minimum clearance is 0.75" between the possibly intruding rivet tails and the leg. So, all that is to say the "hook" needs to be as narrow as possible (the bungee is 9/16" diam) to avoid clearance issues. I think I can get it down to 0.75" width which would work and offending rivets could be reversed or flush riveted.

I think it is do-able, but it is going to be tight!

Permalink Reply by Chris Hoare on August 17, 2016 at 4:21pm
Looks good John will keep an eye out for this very interested as do not like the single bungee and was looking at the steel one before first flight

Now that you have a straight shot between two points - how about replacing the bungee with a permanent, metal coil spring on each side? It would hook onto the pin at the bottom and hooks at the top. Super inexpensive, available in any tension, easy to unhook.. and no need for replacement (heat/age wont bother).

Just the first thought that popped into my head when I saw your diagram.

It was much easier for me to relate to bungees, especially after talking to the manufacturer and being reassured I was in the ball park comparing the two smaller bungees to the larger single one. ( I had already picked the #9044 and the manufacturer independently recommended the same one!)  I have no way to prove it, but I have a gut feeling that the two bungees will probably last much longer than a single bungee since they would "share" the stresses and there is almost no torsional or twisting forces on the loops.  At worst, it could turn out that it cost twice as much (two bungees instead of one) but last more than twice as long? (Yeah, I know - wishful thinking! Ha!)  However, like I said, loss of one bungee shouldn't be as dramatic and it will be far easier to replace them!

One of my first ideas was to use steel springs and as you say, it would be inexpensive and permanent. However, I started looking at readily-available spring specs and got the impression that I probably couldn't get one in a small enough diameter to fit in the space between the gear leg and the support. However, I may be wrong about that because quite simply, I don't know much about springs!

If someone who knows something about springs can come up with one that is perhaps 4-6 " long and will allow about 3" travel and support a resting load of approximately 100+ lbs per spring and do all that with a diameter of approximately .75 inches, then that would be ideal.

Thanks for the link, Ken!  I looked through all their stock springs and several other vendor's, too. I couldn't find any extension springs anywhere near the load requirements  and extension distance required for the nose gear suspension and keep the o.d. less than an inch and the overall length 6" or so.  I guess that's why the "steel bungee" has a single, large diameter compression spring!

While the bungees have their drawbacks in that they aren't  permanent and require occasional replacement, they do have excellent suspension characteristics for such a compact package.  I think the very minimal up-front costs - a few dollars of steel, nylon, and buying 2 bungees instead of 1 - coupled with ease of replacement, and "possibly" much longer life (just a hopeful guess! Ha!) would make the design a significant improvement over the present design. To be fair, welding costs could vary from free if you DIY to several $ if you hire it out (I'd have to - I can't weld very well!).