... and a few more "I've been meaning to do that" projects! How about yours?

We're finally getting a bit of winter here in East Tennessee, having had lots of great flying weather up till now. One of my resolutions (partially inspired by Dan Niendorff's " A Couple of Upgrades ") was to get out to the hangar on crummy weather days and do some of those projects that "I've been meaning to do" and have put off - nothing major, but little things that "I'll do that next week" and the procrastination has turned into years in some cases! LOL!

I recently completed and posted about my flap switch relocation project.  I'm really happy with the result and this inspired me to get a couple more simple projects done!

I've got the Edition 1 STOL 750 airframe with the "flat" roof window and diagonal brace crossing overhead.  As a consequence, I did not want the weight and loss of headroom with the adjustable seats.  I'm average height and mounted my seat almost as far back as space allowed (it never occurred to me to narrow the seat back to clear the uprights!), but after 100's of hours, it always feels to me that if I could scoot the seat back just a bit more, it'd be "just right" as far as leg comfort.  There was enough remaining clearance the seat back could go aft about another inch before resting against the left cabin upright.  The problem was, the forward seat pan mounting holes were as far forward as possible and allow adequate edge distance, so moving the seat back would either require new nut plate installations farther aft or, extending the forward edge of the seat pan.  I elected to do the latter because I could take the seat into the comfort of my shop at home and modify the pan and not have to work within the confines of the plane's cabin installing nut plates.  Also, I wanted to learn how to squeeze solid rivets and this was a good application for them!  The extension flange I added also neatly covers the edge of the padded vinyl "skirt" that covers the metal in front of the seat cushion and then drapes down to cover the dual stick mechanism.

I chose solid, flush rivets for the bottom of the seat pan so the pan would remain flush against the support underneath. Solid rivets also have a rather flat shop head that would not poke or catch in the fabric of my upholstered cushion.  I'm very lucky to have an A&P neighbor who has built several EAB's and has every imaginable tool (which he willingly lends!) including a pneumatic squeezer!  I've seen it used but never used it myself.  I watched the Kitplane's "Metal Magic" YouTube video on squeezing rivets, practiced on some scrap, and easily put down a line of flush rivets.  The .063 thick extension let the seat move back about 7/8" - just enough that it feels "just right" - guess we'll see if that's correct after a few more hundred hours! LOL! 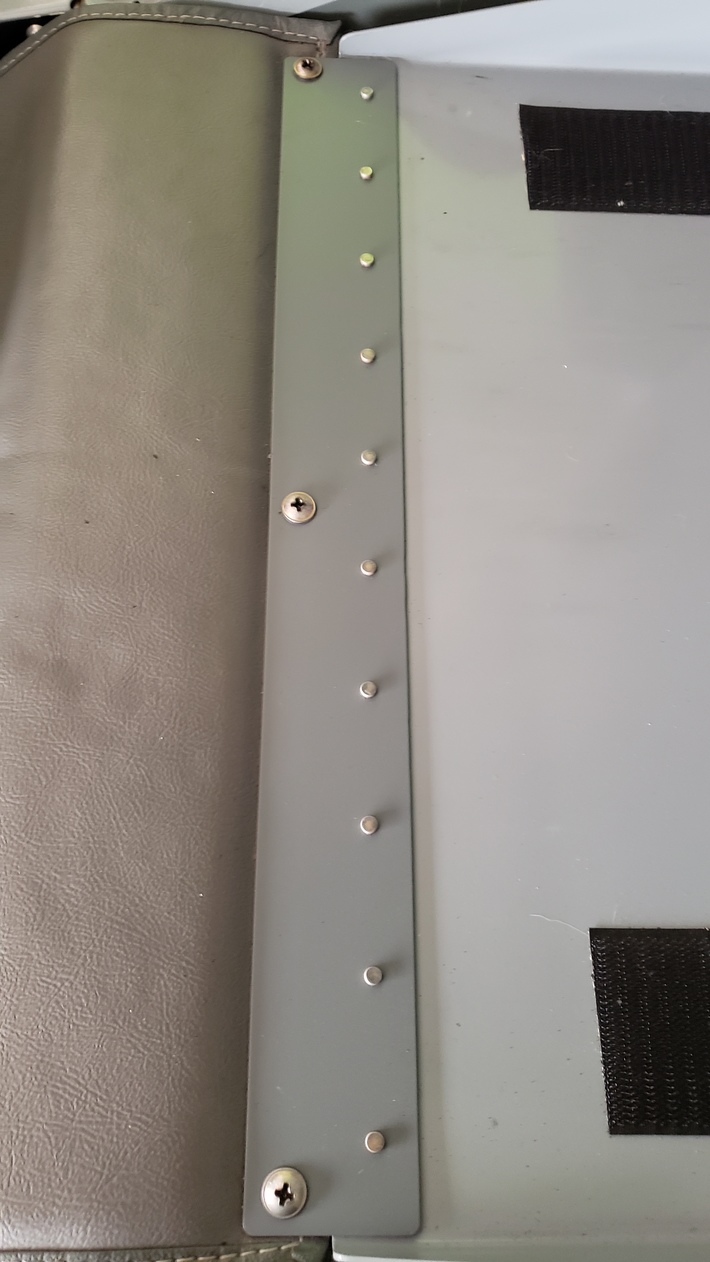 The next project was very quick and really easy.  I've got a Jabiru 3300 in the 750 and it has 2 NACA ducts on the left side of the cowl (one for carb air and one for cabin heat).  I've always plugged them to deter dirt-daubers from building mud nests in the ducts.  I made some plugs long ago, but they never really fit well (foam was too stiff) and the foam seems to be hardening with age.  So, got some very soft foam balls that are used for magic tricks, poked a rope through them, and secured them with a rubber grommet and heated the rope knot to melt it enough to keep it from unraveling.  The rubber grommets spread the pressure so you're not as likely to yank the rope through the soft foam.  Of course,  a "Remove Before Flight" flag is mandatory to help prevent taking-off with the ducts plugged!  These are totally conforming to the inlets and work great - not sure as to durability, but we'll see. About the only thing left on my punch list is there is a pesky little draft which I think is coming under the windshield trim om the pilot's side, but all I think is needed there is another bead of sealant under the rubber trim. I'm also thinking of installing some tie-downs in the baggage compartment, but that needs to wait for warmer weather (there goes that procrastination again!).

How about you - what minor mods or fixes have you been putting off or recently did? Hmmm?

Nicely done!  I’m glad to have inspired something!  I’ve got a few more mods I’m working on……. I’ll post when I’ve got completed work to show.

After the first oil change on my Gen 4 Jabiru I thing a quick drain oil valve is next on the list.  I should probably also make some plugs for those NACA Ducts before spring.

This time of year when the weekend weather won’t permit flying I often pull the cowlings and look around for either something to tweak that I’d spotted on a preflight and intended to address at the next annual, or for something I may have overlooked.  There’s always something that deserves attention or could be improved.

I did get around to running a bead of sealant under the windshield trim and it did cut down on the draft on the pilot's side.  There was still some cold draft coming from the lower front of the door, seemed primarily between the lower corner and the secondary latch I had installed  to snug the door against the weather strip and prevent the door from catching air and blowing off - a problem that has sometimes occurred with the fiberglass-framed doors (My STOL 750 is an edition 1 with the fiberglass doors). What I think is happening is that the lower-forward fiberglass flange that overlaps the door opening is bowed slightly outward below the secondary latch and catching high-pressure air: 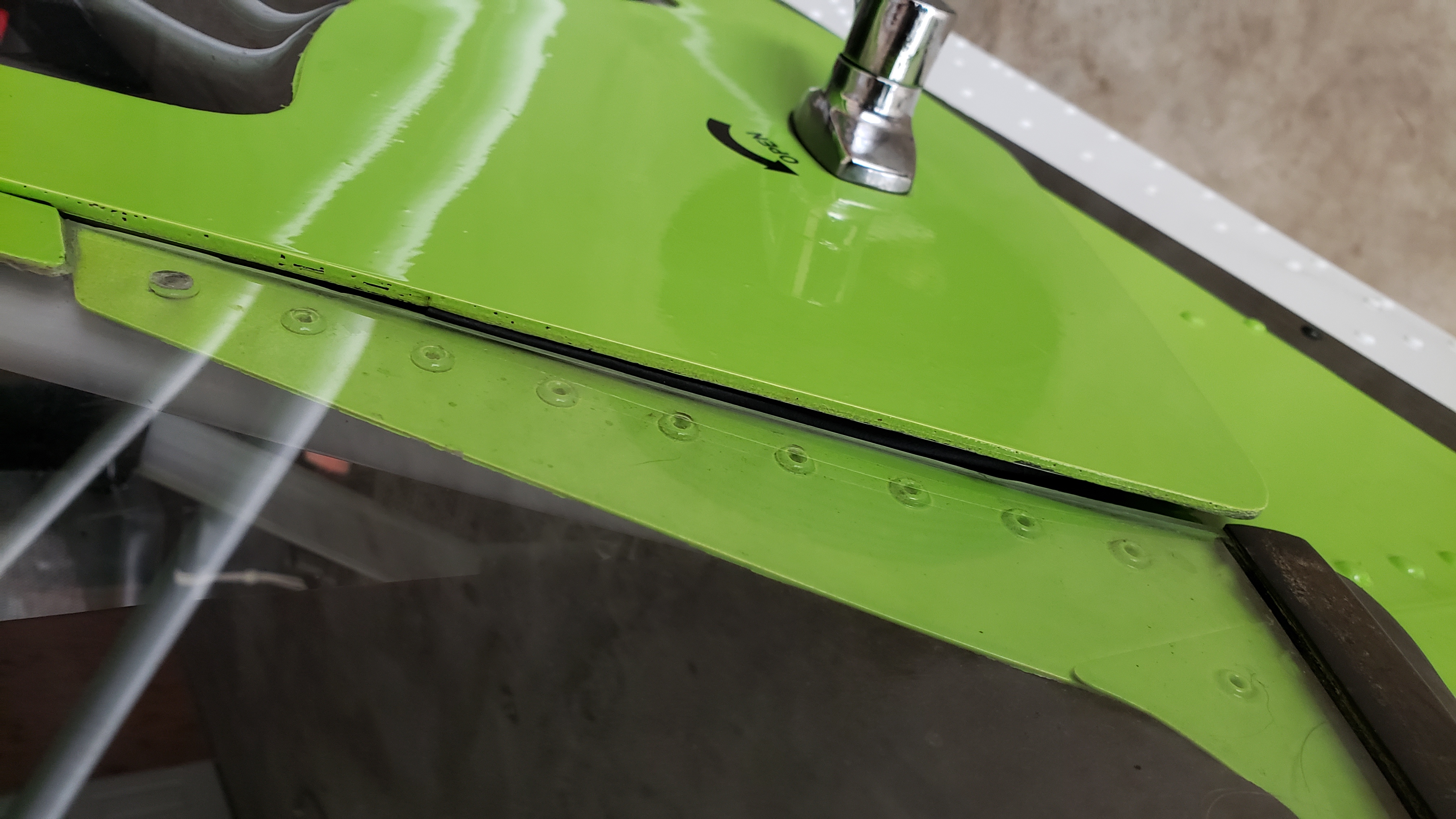 I think there's enough pressure from this leak that it overcomes the soft, bulb-type weather strip. So, I made a diverter or fairing to direct the air up and over the door flange where it protrudes.  I had some 0.025 L angle that I opened-up the angle from 90 to more like 140 degrees and, after trimming and paint, affixed it with 3M VHB tape: 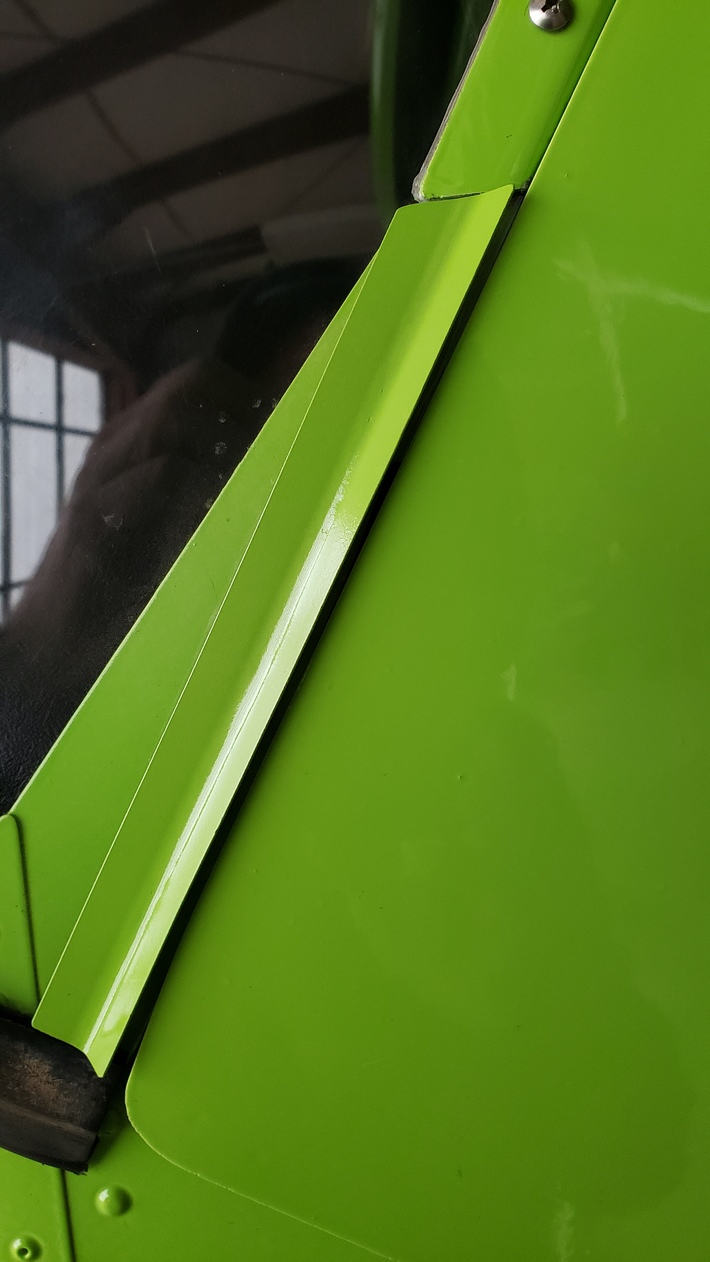 Hopefully this will fix the remainder of the air leak and even if it doesn't, it completes the trim where there used to be a gap at the bottom of the side of the windshield!  Although the VHB already seems to have a good bond, I'm going to let it cure some more and then try a test flight the next decent weather we get!