Airspeed and RPM vs Prop Pitch

Have done some more testing regarding Airspeed and RPM vs Propeller Pitch.

Long story short, it's looking like the sweet spot for the prop pitch is around 23 degrees (for my airplane, anyway).  My airplane is a CH601XL-b, running a Viking 130 with a 3-bladed 68" Whirlwind prop.  Aircraft has CH650 mods (Canopy, wing incidence) as well as wheel pants, a fairing inside the cowl, and a tapered shroud aft of the radiator (underneath the fuselage behind the main gear).

Initial prop pitch was set at 19 degrees. This pitch was too low for this airframe, and the engine quickly hit the rev limiter at 6,000 rpm's. Ditto for 20 and 21 degrees prop pitch.  I didn't take much data at these low pitch settings as it was obvious from the outset that these were settings that I would not be flying with.  So the lower the prop pitch, the less data I took.

Beginning with a prop pitch of 22 degrees I was able to go to WOT without hitting the rev limiter in straight and level flight.  I also tested at 23 and 24 degrees of prop pitch.  24 degrees did not yield any improvement over 23 degrees, and I believe that pitch starts to get into the "back side" of the performance curve.

Highest speeds obtained was 155mph (indicated) which was seen at both 23 and 24 degrees of pitch.  Generally, speeds (per any particular rpm) obtained at 24 degrees of pitch were no higher than speeds obtained at 23 degrees of pitch (at that same rpm).  Strangely, in one case the data showed that the engine was running higher rpm's at 24 degrees that it was at that same speed while at 23 degrees pitch, which is counter-intuitive.  I suspect this was due to being in a slight dive before reading the data and that if I would have flown straight and level for longer, the speed would have bled off slightly (along with the rpm's). 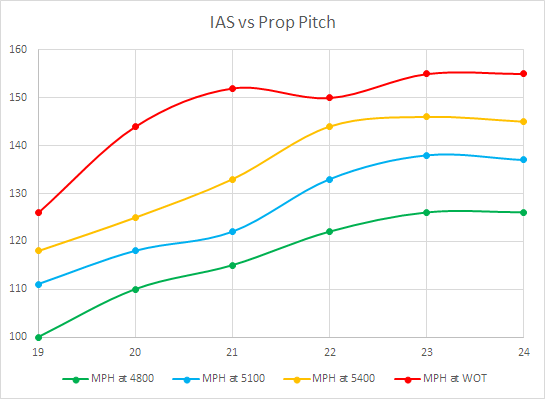 Real-world observations, and notes regarding the graph:

From the graph it's also apparent that there isn't much difference (in terms of speed) between 23 and 24 degrees prop pitch, across all rpm's.  However, the graph doesn't show the behavior of the airplane in the air.  It is MUCH harder to land at 24 degrees of prop pitch.  Attaining a high enough angle of attack to get it slowed down also results in a high sink rate which is tough to properly flare out of.  Plus, you can't see the runway...

Generally, more rpm's means more speed.  But at some point it becomes uncomfortable, both in terms of airspeed and in terms of running an engine hard.  Running at 155 mph isn't fun, and you spend as much time watching the airspeed indicator as anything else, and feeling hyper-alert for bumpy air as the plane creeps closer to Vne.  I prefer to run at lower rpm's and safer speeds (roughly 125 to 130 mph range).

23 degrees of prop pitch at 4800 RPM flies the airplane through the air just as fast as 19 degrees of pitch at 6000 RPM. 19 degrees would be great if you're in a STOL competition, but not so good if flying cross-country.

The lowest rpm's I tested at was 4,800.  It would have been nice to have better instrumentation so that I could easily log data at lots of airspeeds, but my data gathering capabilities are limited.  I use a cell phone, a Viking View, and I "took notes" via speaking into a recorder for later review.  I also have a data logger, and while that works great for engine parameters, it doesn't log airframe stuff.  Somebody who has instrumentation that logs all of the data to a file would be able to get much better data.  I tried to compensate by setting my altimeter to 29.92 and getting data at the same indicated altitudes every time.  Of course, OAT is a variable.

What would be really nice would be an in-flight adjustable prop.  Being able to take off (and land!) at the equivalent of 19 degrees pitch, and then to be able to cruise at 23 or 24 degrees of pitch would be the way to go.

I have not studied Rate of Climb or Fuel Burn in any detail, but would like to.  From a "real world" perspective, the rate of climb has been very good across all pitch settings (particularly when compared to other airplanes I see at this airport), and the fuel burn appears to be very good.

This is super helpful!

Thanks for sharing.   It will be great if others jump in here and see how their planes compare....

Thanks for the helpful information.

I will initial set my prop to 23 degrees and test.

Had to post this to the web site under

Just a curious question, I see your degrees of prop pitch

are much higher than my three blade 68 inch warp drive.

can anyone explain the huge difference in prop pitch?

i am running 10-11 degrees while you are running almost twice that.

is it the design of the prop?

The pitch will be different for different company propellers and whether you have a 750 STOL or a Cruzer.

The shape of the Warp drive is very different than the Whirlwind propeller.

The recommended pitch for 68 inch Whirlwind on Cruzer is approximately 21 degrees.

The recommended pitch for STOL is approximately 11-12 degrees (much lower).

Also the pitch can determine the max RPM.

Good luck. I can not impress the amount of anxiety on my first approach to propeller but in retrospect it was very easy,

Thanks for the explanation, I have mine dialed in pretty well,

i was just surprised at the difference. Like you said the design of the prop

The real reason is that the Whirlwind propeller does not set the pitch at the tip.

I've been trying to find the sweet spot for my build too.

2nd - 24 degrees - a little better but not much difference

Side question - how many times can you reuse the nord-lock washers before replacing?

This last question is easy, 6-8 time fully tightened (I got this specifically from Nord-lock).

My performance today. I feel good about this being my final prop pitch.