Any suggestions on design modifications and/or procedures to make cowling removal and reattachment easier? My 750 cowling is modified for the IO-240, but I presume the attachment design is the same on most or all. It is difficult (read: impossible) to see what one is doing when trying to feed the heavy wire pin through the hinge pieces, and it takes some forcing, even pounding vice-grips, as the "pin" binds, particularly on the curves. In addition there are machine-screws that secure the two fiberglass sections together, and safety wire is used to hold the ends of the pins in place (crude, but effective, I guess--or maybe redundant, but better to be sure they don't work out and get hit by the prop, I reckon.

Any ideas on this whole subject?

I decided against the piano hinge setup.  I have a O-235 in mine so I had some "finessing" to do on the cowl as well.  Originally I was going to use Dzeus fasteners, but in my experience they don't last and hold too loose for my taste, especially after being put on and off for a while...  I simply re-enforced the edges of my cowl with aluminum and installed nut plates to fasten the cowling down.  Not a "quick-attach" by any means but I can pop the cowls off in just a few minutes when needed and the cowl is held on tight!

Any chance of  a couple pics showing how you attached to the side skins?  I just fitted the bottom half of my cowl for the UL350iS and it is simply cleco'd for now while I contemplate fitting the top half and what I need/want for final fasteners. 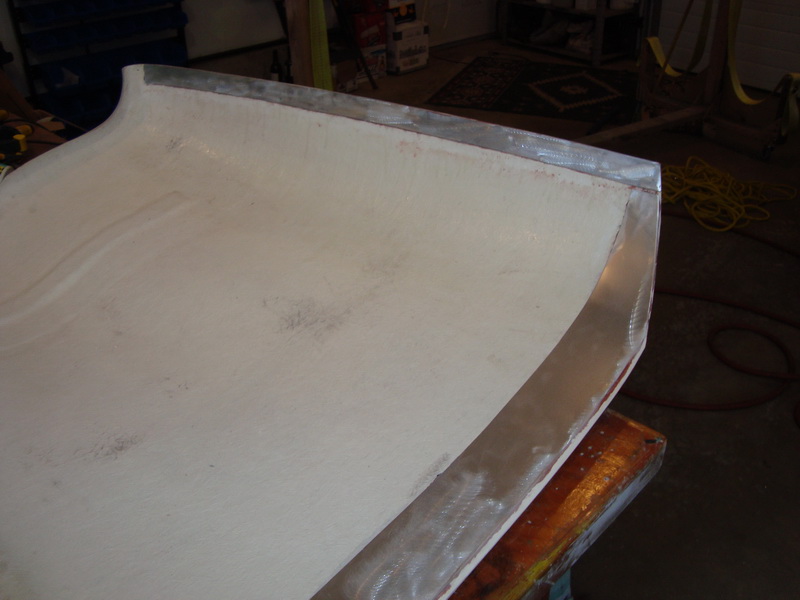 I initially used epoxy for the alum. re-enforcement but it didn't hold very well.  I switched to high temp silicone instead.  Buttered the cowl and the trim and clamped it on to dry. This is the top cowl.  Bottom cowl got the sides that attach to the fuselage and the the upper area where the top cowl attaches re-enforced as well. 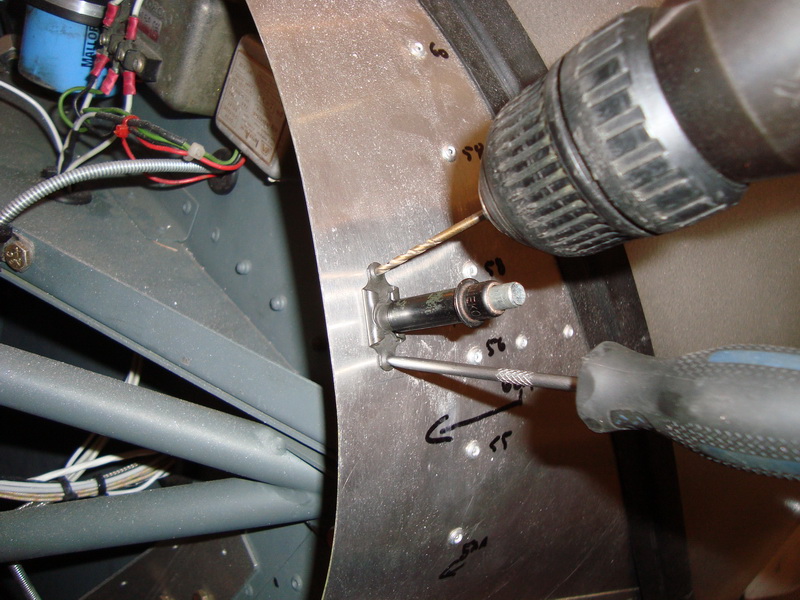 I found the skin on the forward fuselage is beefy enough for the nutplates, but you could add a strip under it if needed.  After I installed the cowl I found it nice and tight with no slop at all. 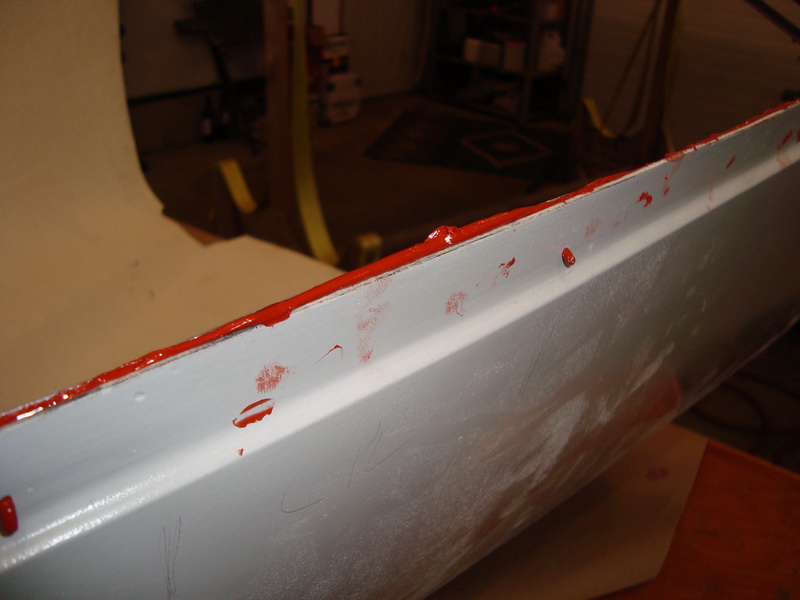 This is what it looks like just after using the silicone.  It's pretty easy to trim off the excess after it dries with a box cutter and cleans up with acetone.  Nice about this stuff is that it stays pliable so vibration won't hurt it! 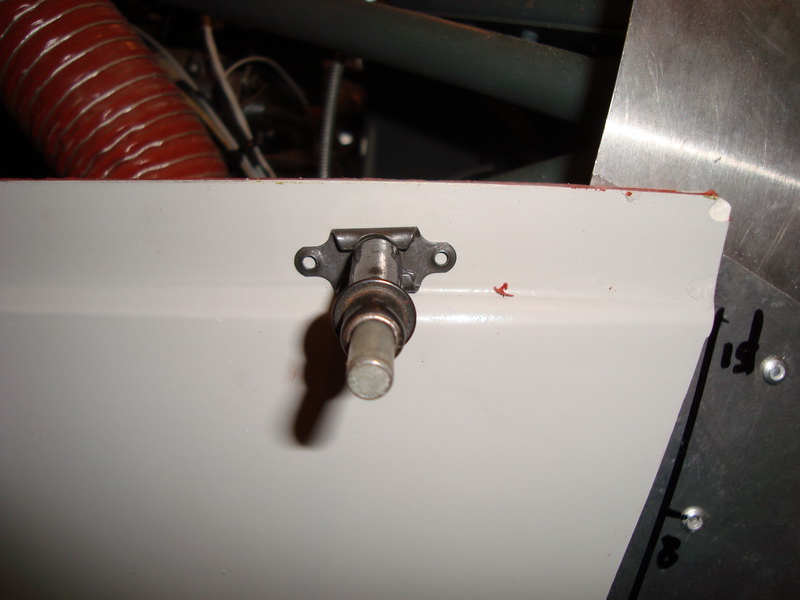 Nut plates drilled through the front as guides then installed inside the cowl and riveted into place! Attached the cowling with AN screws. I also beefed up the area around the front gear.  The cowl was too sloppy IMHO in this area... :(

I initially used epoxy for the alum. re-enforcement but it didn't hold very well.

I, too, reinforced the edges of my Jabiru's cowling where fasteners are inserted. My cowl had already been painted on the inside (catalyzed urethane) when the painter became concerned that the paint on the outside of the cowling might crack due to the flexibility of the fiberglass and he recommended reinforcement. I used epoxy with great results. You may have followed this procedure, but here's how I did it: I scuffed the inside of the cowl where the .025 aluminum strips were to go with #80 grit. I then used West "G-flex" epoxy (a filled, flexible epoxy especially recommended for bonding dissimilar materials) to bond the aluminum to the fiberglass. West recommends the "prepping through wet epoxy" method for aluminum: you put a thin layer of wet epoxy on the aluminum and scuff directly through the wet layer with #80 grit alum oxide paper. This obviously forces the epoxy into the scratches in the aluminum for a good bond.  I put another thin epoxy layer on the scuffed fiberglass inside the cowl and clamped the two together. You can get a bag of those plastic spring-loaded clamps at Harbor Freight pretty cheap, so I clamped every few inches along the strip! Ideally, you want just enough epoxy that you'll get a "squeeze out" and a small bead of epoxy oozes out from the clamping pressure.

Later, when the epoxy has cured and the clamps removed, I added a bead of epoxy anywhere there was not a good "squeeze out" bead. Using this method, I had excellent results! In nearly 300 hrs and many, many cowl removals, I've had zero problems with delamination. In fact, when I initially fastened the cowl, the last screw at the bottom had to pull the cowling in some to close the gap ... I held my breath thinking it might pop the aluminum loose somehow - to my amazement, the aluminum actually kept the gentle bend inwards and held the cowling permanently in that conforming shape! Best part, not a single crack in the paint or fiberglass around the fasteners!

BTW, great write-up with pictures inserted rather than links - keeps the train-of-thought going, which "retired guys" like me need!  ;>)  Keep'em coming!

I'm not sure why my epoxy didn't hold!  It was prepped as directed but it peeled right off when it dried.  Was expensive stuff too! :(  I wondered if my cowl was different since it's for a different engine... don't think so but you never know.

The silicone seems to be holding fine.  I can't peel the aluminum away by hand... probably could with a screwdriver or something though I guess but that would be a lot of effort.  I'll see how it holds up.  One thing for sure is that I needed some re-enforcement there, I can't see that fiberglass holding up very long without it.  Will be adding anti-chafe tape then finishing up rubber edging on the front and back of the cowl.

It just came back from the paint shop yesterday.  Don't have a picture yet though.  I'm doing the final W&B this weekend so we'll see how she fairs! :D

Thanks for posting the pics Mark...you too John!  Gives me some very good insight as to how to approach the cowling portion of the project.

Did you use the "prep through wet epoxy" technique and was the epoxy supposedly flexible?  That would be the two most critical factors for success I can think of. (If someone else wants to try this, West G-Flex is available from Spruce ... it'll confuse you when you get it because it comes as a "Plastic Boat Repair Kit," but hey, if it said "Airplane Repair Kit," it would cost 10 times as much!

Not familiar with the 750 at all but using a pin one size under should solve the binding problem.  If the 750 already uses the smallest hinge(1/8"?) you might think about using a 3/32 welding rod as a pin. That's what I would try.

Sounds like a reasonable idea . . . There was a busted rivet at the forward end of the starboard bottom hinge that allowed it to pull away from the fiberglass screwing up the alignment. With that fixed, I think I can get it done, maybe tomorrow. the machine-screw holes you see go through the fiberglass, not the metal. I don't think much of this, but not being a real builder, maybe I'm just being anal. It seems to me that their main function might be to hold the top cowling into the proper position for the "easy" insertion of the pins. I'll probably try to live with this, but John's way seems to be (ain't it always?) the superior way to go.

Any other suggestions will be welcome, such as whether or not to try to add nutplates to give those machine screws something to screw besides fiberglass and how to best attach them to the fiberglass (rivets, epoxy, other . . . ). This is the only kinda sloppy work on the whole airplane (the rest of the workmanship is first-rate), but the builder (who had built at least two other prizewinners, including a Lancair, and built a 701 before this one) was dying as the plane was being finished--maybe he got some help . . .

A friend suggested me to punch holes in aluminum sheet/plate so that the fiberglass or epoxy can have 'finger grips' on the aluminum.

Ok, this method sound pretty good. Here are some photos of my present set-up (which "works," but is damned inconvenient to put it as politely as I can . . .

Two is the max I can send, so I'll send one or two more through another post.